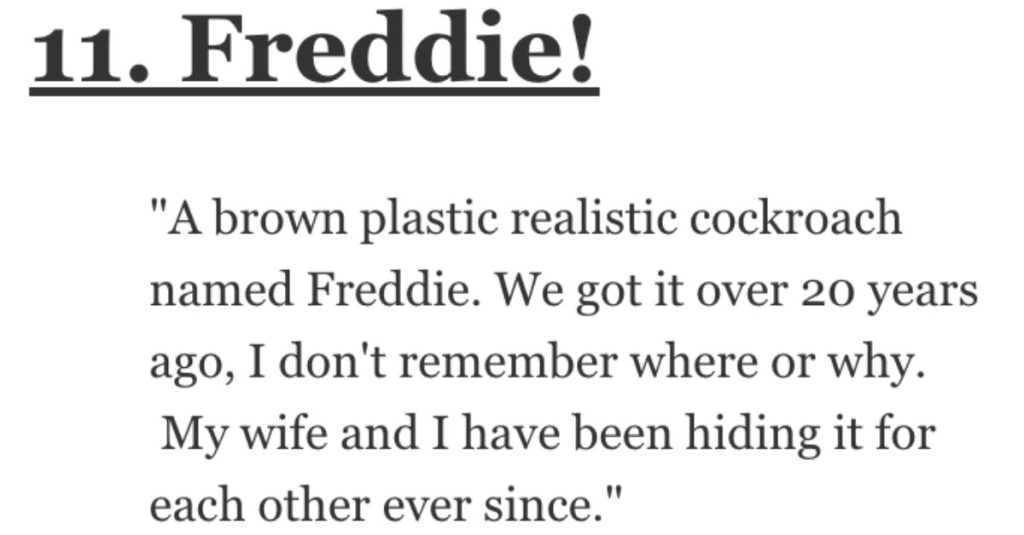 I don’t have many fancy, expensive things, so it’s the little things that don’t have any monetary value that are the most important to me.

And I’d probably feel that way even if I had a bunch of nice stuff.

My point? It’s the little things, priceless that you’ll cherish and hang on to throughout your life that are really important at the end of the day.

People on AskReddit shared the things they own that are not worth much money but are priceless to them.

“A tiny paper crane a Japanese grandmother gave me when I was in Osaka at a museum.

She worked there and was waiting for tourists to come play an educational board game with her. She got no interest, obviously. I reluctantly sat down and played after she caught me on my own with a smile and a beckoning wave. Even though we couldn’t speak each others language and I kept messing up, she was so kind to me. So happy that I sat with her.

She made me deal with my impatience and sit with the distress I was feeling that day by slowing me down and making me do something plain and simple. When we were done she gave me a tiny paper crane from the pile she had made to give to all the tourists that should have sat with her and didn’t.

It made me really sad. And really happy I’d met her. And I hope she’s doing well.”

“One specific screw, it has emotional significance.

During our first official date with my gf, I got a flat tyie because of that random screw. I had never changed a tire before in my life and I was afraid I’d make a fool of myself in front of her, but it all worked out well and she was super impressed.

Next day, when I took my car to the shop to patch the hole, I asked them to return me the screw just for the happy memory.”

“On the 4th of July, my sister and dad found a kitten in our barn.

He was tiny and looked like he was on death’s front door. He ended up losing most of his hair and had to go through several rounds of antibiotics.

Today, he’s a happy, healthy, and spoiled boy. His hair grew back and he has such a silly personality. We are so thankful we found Alec that day. He adds so much spice to our life and plays and cuddles with our pit mix.

To us he’s priceless, but he was free when we found him.”

“My now husband and I went on our first date which was supposed to be coffee and ended up being a 7hr amazing chat session.

My husband is not super affectionate or sentimental.

Recently I found his parking meter receipt from that date ?.”

We got it over 20 years ago, I don’t remember where or why.  My wife and I have been hiding it for each other ever since.

It could take months for Freddie to pop up but he always does. She will find it buried in the sugar pot.

I will later find it inside a pair of shoes I rarely wear. It often makes us jump, and give a small fright. I’ll hear my wife let a surprised gasp then go: “Oh Freddie!”.

For me Freddie is a great symbol that our relationship is still solid after all these years, that we still take the time to have fun, to surprise each other.”

“When I left my home country to study abroad, my gf at the time did a watercolor drawing the size of a business card as a reminder that “she’ll be there”.

I have since then used it to cover up the slots in my wallet where I put my credit cards and IDs… which means that whenever I pay for something my cards slots look empty.

Everything important is behind this little drawing.”

“The piece of paper that contained the eulogy I read at my mothers funeral this past July.

Sure I have a copy saved to my computer but there is something about that tearstained wrinkled piece of paper that means more to me than any other object in my house.”

“My first bass. I’ve got it for free as a gift.

We were goofing around with friends and we decided we want to start a band. Everyone played an instrument except me. They wanted me to be there though and we didn’t have a bassist. Within a week I’ve got a bass and it changed my entire life.

It changed my taste and view of music, the way I look at my friends, the things I do in my free time. That bass is no longer in use, it’s old, crooked, rusty and it looks like it might fall apart at any moment but I would never put it in the trash.

It is priceless for me.”

It’s a one dollar bill with a picture of ex UF basketball coach Billy Donavon taped over the President.

It was a single dollar a friend and I would pass back and forth that we would bet on different things.

It’s a trophy we have passed back and forth over the last 20 years. It’s an item that has kept us in touch.”

“I have a heart shaped rock that is about the size of a quarter.

My son gave it to me when he was 3 and told me to keep it forever.

I have it in my back pocket daily.”

“My daughter made me a pencil holder out of a soup can and construction paper that looks like a cat.

It’s been on my desk for 20 years – she’s long gone from the house living her life but every time I look at it I see the 9 year old that made it.

I found him in a box outside of a liquor store. He was 6 week pitbull covered on mange.

I took him home bathed him twice a day everyday for weeks to get the mange to go away.

I had a door that was sagging in my house due to the screw over time wearing a larger hole in the wall, and after some research I found a tip that shoving a matchstick with the tip broken off inside (and a dab of glue) could make the hole smaller.

That matchstick was worth its weight in gold, so about a dollar, after it helped me fix a huge annoyance.”

“A ratty teddy bear passed down from my (much older) brothers to me.

Is the only item I have that survived my insane childhood.”

“The book that my Grandma used to read to me.

It’s worthless, wasn’t even listed on Goodreads until I added it, but she died in 2005 the day after my 8th birthday and remembering her voice reading it is one of the clearest memories I have.

Would definitely save it in a fire.”

“A “best brother in the world” pin from my brother who passed away.

He gave it to me when he was six.”

“My son found a rock on the way home from school in kindergarten.

We were walking home through this park we always cut through and he grabbed the rock and fell in love with it. It just looked like mud to me but who cares he loved it. When we got home I helped him wash it off in the sink and it was black and kinda blueish.

He said it was awesome and then gave it to me. Its one of my most precious things in the world to me.”

“There’s a picture of my wife and I with our adopted daughter.

The picture was taken when she was around 13 or so but we didn’t adopt her until she was 16.

When we took it, it was just us and a kid we kind of knew from church. It’s so cool to look back on and see how far we’ve come.”

“Handwritten letters from my grandmother who passed away a few years ago.

While it is sad to see her handwriting get progressively worse for each letter at the end it is nice to have something that was that close to her.

I have them stored in a small box and it always goes into our evacuation bag during fire season.”

“I have a 1$ bill saved and put away in a drawer. The significance behind it is it was my last dollar before I decided to stop gambling and doing hard drugs.

I had to stop cold turkey. I was so f*ckin done being a half human, or an empty shell. At first it was just a dollar that sat in my center console in my car. I would look at it and be reminded what I was doing. I’ve been sober for well over a year now. I feel like that 1$ is special.

I know in narcotics anonymous they get something saying how long they’ve been sober or whatever. That 1$ is my token. My token for fighting a silent battle that I cannot share with people otherwise I could lose my job.”

“My collection of old dog tags.

I have it in my will that I’m to be buried with these.”

“I have an old kitchen knife that’s probably worth like 25 cents.

But through some mysterious power of the universe it cuts better than any knife I’ve ever used. Meats. Veggies. Bread. Cheese. It doesn’t matter.

This thing glides through it all with ease and has never been sharpened. Easily my most important kitchen item.”

“A single post-it note folded into a paper airplane with the words “will you be my boyfriend?”

But he died 2 years ago and it reminds me of him when I wear it.”

“I have one of the bullet casings from my grandfather’s military funeral from the 21 gun salute.

I don’t really know it’s value, but I got it for free.

My mother, cousins, aunts/uncles, and I on that side of the family each received one.”

What’s the item in your home that’s worth $1 or less that is the most valuable to you?