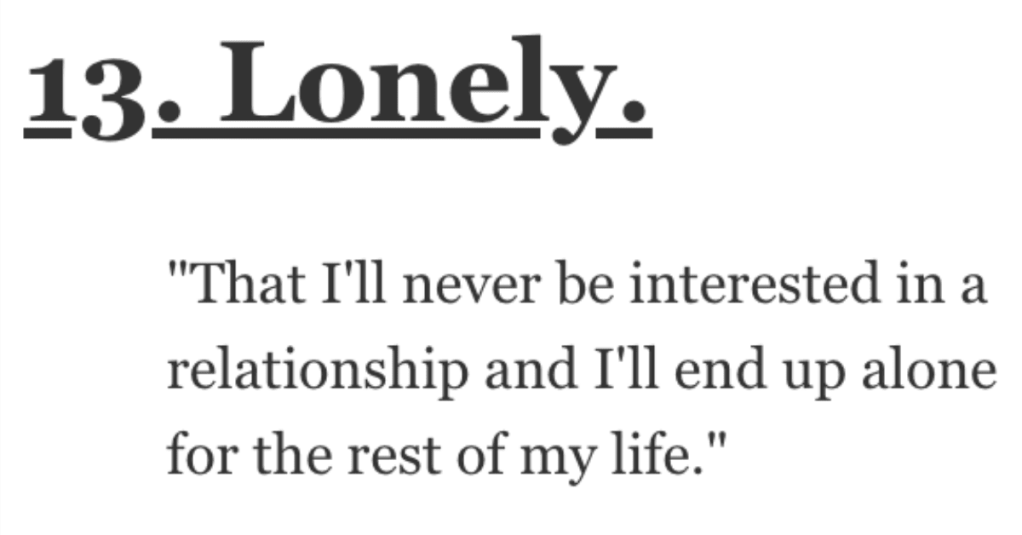 Be honest with me, how many times have you heard that before?

Probably all the time, right?

Well, guess what? A lot of people have fears that are rational and that could potentially happen…so let’s cut them a break, okay?

AskReddit users shared their fears that they think are perfectly rational.

Out of all these, this is the one that scares me the most, I watched my great grandmother slowly forget her whole life and that would be utter terror to me.”

“Getting stuck in a small hole in a cave head-first with no way of moving your arms or legs and nobody nearby able to hear your cries for help.”

“Living in poverty or being homeless.

They say that money can’t buy you happiness.

But it sure can buy you freedom.”

4. Gotta take care of yourself.

“I’m afraid I will make poor health choices as a younger person that will decrease my quality of life in my late 50s-d**th.”

I have to cross the highest bridge in my country to get to the store.. on my bicycle.. only a small metal fence between me and the awful depths..

You can just be going along, minding your business, driving the speed limit and obeying traffic laws, and BAM, some reckless person comes outta nowhere.

Completely out of your control.

This is also applicable after a few beers or when tired.”

Almost every single night I have some kind of vivid dream that’s not so pleasant.

Wouldn’t call them full blown nightmares but I wake up so drained and it prevents me from having the battery charged and just being able to have the mindset to tackle the day..”

I’ve lost 2 relatives to it.

I’ve briefly talked to someone who has survived and recovered from one and it sounds like you’re better off to just d** from it than try to recover.”

“One day, I’ll actually acquire everything I’m currently convinced I need, and none of it will make me feel happy or complete.”

“That I’ll fail one day.

That I might be fired, and won’t be able to get another job. That maybe ends won’t meet and I can’t make them, or that an opportunity will be offered and I’ll be too ignorant or stupid to take it.

I just really, really want to be able to live life to the fullest instead of living in a run-down apartment with no job and empty cupboards.”

“Motor neurons failing, but your mind is sharp as a tack.

It progresses over a number of months until you can’t swallow anymore and then you choke, asphyxiate, and d**, or your lungs can’t physically inhale anymore and you asphyxiate and d**.”

“That I’ll never be interested in a relationship and I’ll end up alone for the rest of my life.”

“Until 2020 my mom always laughed at my fear of virus outbreaks and aliens.

“The ocean. Seriously, its a big blue nothing full of things that can k**l you. Hell, even drinking it can k**l you!

And vehicles! 1,000 lb d**th traps moving at 70+ mph, the only thing saving you from being removed from the census is a little yellow line and a mutual agreement not to play bumper cars!”

I just moved to a part of the U.S. where venomous scorpions occasionally crawl into your house and hide among the clutter on the floor.

I don’t want to get stung; it would be painful but not d**dly to me.

My real fear is for my dog, who is far less likely to survive a scorpion sting, and loves to roll in piles of laundry on the ground.”

It’s eaten away at a few too many members of my family.

The one thing I’d h**e most is losing my mind.”

“That future generations are not going to live as well as past generations.

They are going to have to clean up a lot of stuff.”

“My fear of heights.

I don’t have a problem with flying in airplanes, or riding rollercoasters, because I trust the machine.

I am scared of hiking (or going up to high places in general) because I know how clumsy I am, and thus, I shall be my own literal downfall.”

“Whenever someone eats my cooking, I’m afraid that they are vegan/vegetarian/pescatarian/some other dietary/religious choice, and that I’ll feed them something they object to, or allergic to one of the ingredients and that they will go into anaphylactic shock.

I think about it whenever friends come over or I cook something for someone.”

I’m afraid of d**ng before my kids are old enough to look after themselves.”

It was a constant fear growing up in the 80s, and then everybody just forgot about it when the USSR broke up.

But the weapons and systems are still there and still ready to go on a moment’s notice.

MAD should keep anything from happening… but there have been some extremely close calls in the past and a colossal mistake could definitely happen.”

“The extent of my apathy.

I don’t feel worry about ANYTHING. Windshield smashed, nothing. PC breaking putting my studies at risk, nothing. Potentially being unable to find work, nothing.

The only time I can tell I’m worried about something is when it’s something major I can always tell in retrospect that I started acting weird.”

I’m finding it challenging to trust anyone in this respect after being cheated on and/or manipulated in the majority of my relationships.”

Bears are fast, strong and smart and they have worked out how to open doors.

The time of the bears is almost upon us.”

Do you have any fears that you think are perfectly rational?