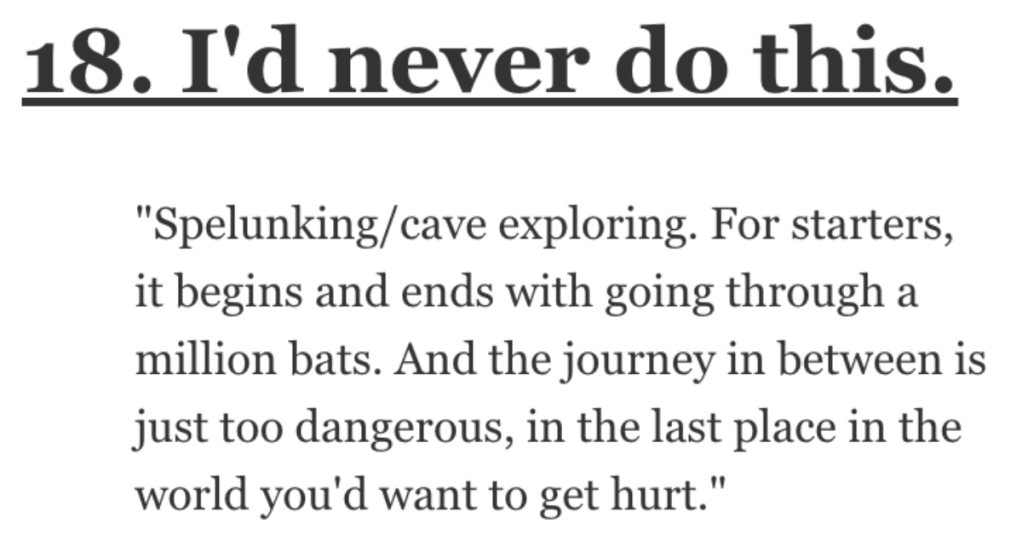 26 People Share What They Did Once and Never Again

But there are a lot of things I’ve never done, so I guess you never know, right…?

What did you do once and never again?

Here’s what people on AskReddit had to say.

“Hiking through jungles. They look so beautiful in movies. In reality they are some of the most brutal hikes I’ve been on.

Let’s start with the humidity. It’s so bad it drenches you to the bone, and there’s no escaping it. Being under a jungle canopy is like being in a pressure cooker. The heat and humidity beats you down harder than any environment I’ve been in.

Then there’s the swarms of biting bugs. From never-ending mosquitoes, giant spiders on everything, ticks jumping on you from everywhere and colonies of aggressive fire ants criss-crossing the trails, you can expect to have more bug bites than you’ve thought possible to survive.”

“Put pizza wrapped in foil in the microwave when I was 10 thinking it will warm up quicker.

It surely did by lighting on fire 3 seconds after I turned it on.”

“Jumped off a bridge into a river.

I don’t like heights but I can officially say that if my friends jumped off a bridge, I would too.”

I live in NYC and I figured it was the kinda thing I wanted to see but didn’t need to see again. Went in 2000 when I was 18.

Got there 11 am and stayed for 13 hours in the freezing cold but with close spots to the ball drop and screen. I’m glad I did it. I’m also glad I’ve never done it again.”

“Not paying attention to currents when swimming in the sea (and going anyway when there’s a red flag and no guard).

Dumbest s**t ever. I was with my two brothers and my father, happily splashing around. Suddenly we turn around and the shore just got very far away.

So we start swimming back but the sea is stronger than you. If you stop 5 seconds to catch your breath you lose the progress you did during the last minute, and that’s precious.

I was young so I don’t remember it as a legit life threatening situation, but my bros and dad still got chills when talking about it.”

“I mixed milk and orange juice because I thought it would taste like a creamsicle.

“I jumped off a roof barefoot when I was a kid, I’ll never do that again.

It was an older house and the roof was low to the ground, so it seemed okay, but my judgement led me astray. I landed on a stone entryway and immediately collapsed to the ground. I had to crawl my way back inside and it was extremely painful.

“Stayed at a bed and breakfast.

I’m not social enough to socialize with people during breakfast.”

Tried some from a guy who went by “Asian Billy”. I did about enough to cover the head of a framing nail and was pretty much having a panic attack for the next 8 hours.

I went to a casino with the other people I was working with and Asian Billy and sat at a blackjack table and just said, “I have no idea what I’m doing, sorry everyone if I mess up your bets.”

Everyone was cool and I ended up winning $175.”

“I stayed at my sister’s place one night and we for the life of us couldn’t find the vacuum cleaner to blow up the spare mattress. So I hit on the bright idea of using the car exhaust to blow up the mattress.

Back then the car used leaded petrol.

As a rule, I sleep with the windows and door closed so I am damn lucky.

Woke up next morning (in hindsight luckily) with the mattress 1/2 flat and the room smoggy. But being low to ground near door, the draft under it keep me alive (again in hindsight).”

I almost called for an ambulance.

Legitimately thought I was going to d** covered in sweat, s**t and vomit.”

“When I was 10ish years old I knew about s**ual things, and when you find smutty magazines and p**no mags you grow up believing that you’re gonna have s** all the time with every random person.

After shaving what small p**es I had, I rubbed toothpaste all over thinking “yeah the girls will like this” did I think it’d taste better? Smell better?

“Tried to intervene during a street fight.

Got shot for my troubles.”

“Got d**nk once with friends under the Ambassador Bridge drinking 120 proof rum from duty free shop.

Puked my guts out. Can’t stand the smell of rum since and it’s been 53 years!”

“I stole a tester eyeliner from the makeup section at a store when I was 17.

The security guy took me aside in a small room and “questioned” me, asked for my information, and to scare me, he said this would always be in my record and companies won’t want to hire me anymore and I burst into tears and had a panic attack. He said he’ll let me off if I pay double the price of the eyeliner, so I did and he let me go.

Now, I don’t know how much of what he told me was real and if the resolve was legitimate, but if he tried to just scare me into not becoming a serial swiper, it worked.”

“Used “Nair” to remove all the hair from my junk with little effort.

“A drug that to this day I don’t know what it was.

Made my knuckles and face go numb and I went into a fit of rage. Snorted it and it was sort of a translucent white and my homie had it in a gum wrapper.

I wouldn’t have done it but I was already high on other pills so I didn’t think twice to really find out what it was.”

For starters, it begins and ends with going through a million bats. And the journey in between is just too dangerous, in the last place in the world you’d want to get hurt.

And super tight squeezes are freaky.”

“Went tubing down a alligator and snake infested South Carolina river with my southern friends on a Fourth of July years ago.

The adventure was only supposed to last 3 hours tops… It lasted 7 hours because the river current was slow that day. I got the sunburn of my life that lasted until November.

We also lost a raft, and encountered 2 copperhead snakes and seen multiple alligators along the edges of the river. My Yankee a** will NEVER do that again. The Southern folks can keep it.”

First hop of the bulls front legs out the chute and I was off…flipping and seeing sky/dirt/sky/dirt and then belly flopped.

That hop felt like a train wreck. Bull riders are insane.”

“Get d**nk till I blacked out.

Having people fill in the gaps in your memory is terrifying especially not knowing how you got home.

“Two things, very similar; the strip club and the casino.

Both places made me feel like a complete moron, pi**ing my money away.”

“Running on a wet surface.

I learned my lesson after getting a few staples to the head.”

“Cheat on a partner.

I learned the hard way as a dumb teen that this is one of worst things you can do and only ever leads to everyone involved getting seriously hurt.”

“The drug Salvia. Turns out, hallucinations just aren’t right for me.

Watching the universe get peeled apart is something I’m not interested in seeing again.”

“Bicycled from the Pacific to the Atlantic.

56 Days on the road (including rest days). My body barely handled the strain then; now, something would break down and probably just stay broken. I know there are people who do it multiple times and take different routes and such, but once was enough for me.

The physical part notwithstanding, now I’m an old guy and have a career and responsibilities from which I can’t take a 50 day hiatus without unacceptable consequences.”

Tell us what you did once and never again.