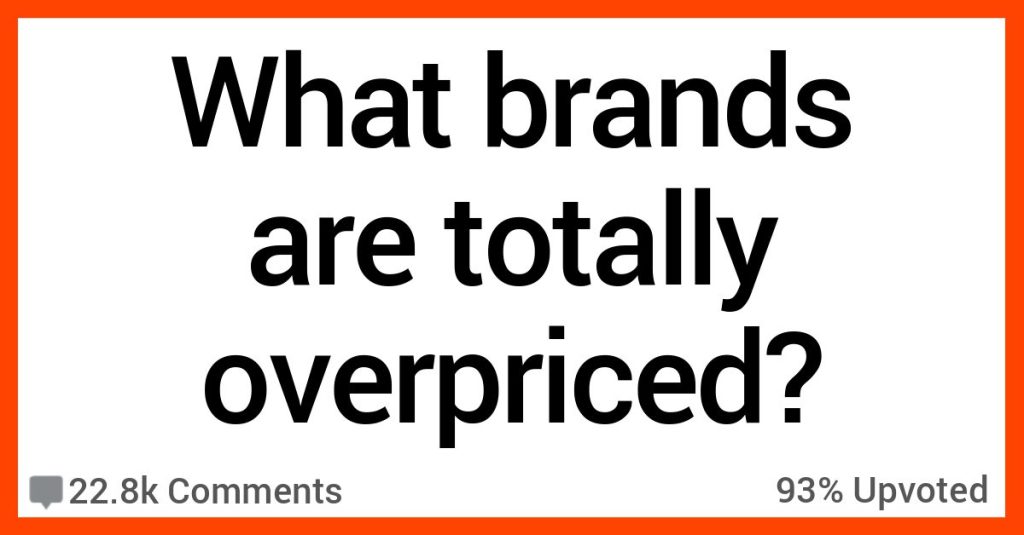 Are you really into certain brands?

Well, if you are, I bet you also have brands that you definitely think are totally overrated and overpriced.

Check out what brands these AskReddit users think charge way too much and we’ll see you in the comments!

Their lineup is so outmatched by everything else in the price range and the interiors have parts bin pieces from jeep and chrysler.

And while no sports cars are made to be toyota reliable the last few years of maserati has been abysmal. The levante does sound incredible though.”

Because Jeep is owned by Fiat, some of the new cars coming out are built onto Fiat systems.

The Renegade is basically the large Fiat 500 chassis and some other bits in a Jeep dress.”

Santa Cruz (the bike brand) do higher end bikes that cost more than their high quality counter parts such as commencal, specialized and forbidden as well as yeti (although more expensive).

With Santa Cruz you get the same if not worse spec for a more expensive price, its more a thing a certain group of mountain bikers buy to “be cool” and be part of the Santa Cruz hype.”

Everyone I know who has a HD motorcycle says it’s always down and in the shop.”

They’re very durable and nice watches, they’re very precise, but they were created as tool watches and because of marketing and a synthetic supply problem, they’re now insanely expensive compared to what they should be and there are watch companies out there with more heritage and horological significance.”

I only buy it because I work there and get an associate discount, and discounted/free items monthly. But if not, I would never shop there.”

Everyone thinks they are rare.

I was going to say “made” by the rich d**chebags, but let’s be real, they more than likely outsource the actual manufacture of the product to Chinese child sweatshop laborers.”

They used to be great. Now, they are just cheap chinese built shoes. I was foolish enough to buy another pair last summer.

They broke after one month. At least, I was able to get a refund under warranty.”

Anyone looking into getting a gaming desktop and not wanting to build their own… look anywhere but Alienware. Terrible cases, no airflow, had one case fan inside, cheapest motherboard possible, cheapest CPU cooler possible, cheapest version of a GPU they could give me.

It was my introduction to gaming PCs because I had no idea what else was out there. Nowadays I can build my own, I’ve learned a ton since getting that PC and now can realize just how bad Alienware is.

You pay for a name, and your components are s**t.”

“Eli Lilly, Novo Nordisk, and Sanofi are the three largest producers of insulin.

They are currently k**ling diabetics in America (and worldwide) because their little oligopoly keeps raising the price.

The price has tripled in the last decade and is now on average between $200 – $500/month for a patient.”

I can find better candles from local hobbyists for cheaper.

Hell, I make them for cheaper.”

Apparently they used to have a good enough reputation to be one of the very few things left from Sears. However, like Craftsman, it’s now just cheap poorly fitting junk not worth spending anything on.

My kids’ school switched to them for a uniform provider so I have no choice. However the service was abysmal and the clothes are paper thin crap, for nearly the same price as the much better stuff from the local chain previously used.”

“Five Guys in the UK.

It’s fresh fruit, cookie cutters, skewers, and about 30 minutes of work. Buying one is a terrible idea, but making a basic one is super impressive to most people and anyone with basic kitchen skills can do it.

Making one and then immediately eating it is also a fun couples activity.”

I doubt this is as much of an issue in countries outside Australia and maybe New Zealand, but so many brands label their s**t as “Byron bay” something or other. It’s almost always trash (Byron bay cookie co. being a notable exception but also probably one of, if not the, first to do it).

Otherwise it’s just an attempt to capitalise on the name of a tourist town that any area local will tell you is a s**thole that’s only good for trying to hookup with European backpackers.”

Vancouver and Toronto prices have started branching out to other parts of Canada over the last two years and it sucks.

The prairies are pretty much the only place you can still find real estate that’s been rising at reasonable rates.”

Their prices used to reflect the mediocre but good enough quality.

Now they got big in the head and inflated their prices WAY beyond their worth. I’m not spending $40 on a shirt that will pill and shrink after a few washes.”

They are called melamine sponges and are cheap AF.

Don’t waste your money of the name brand!”

They used to be super tough, now they suck and you pay for the brand.”

I was a cable TV/Internet service guy for a few years. One of the first thing they told us was when we were trying to track down a signal problem, eliminate the Monster Cables first.

About a third of  the time that’s what it was. The coax jumpers we made ourselves were nearly 100% reliable. The other cables for other things were just cheap stuff in clear plastic bags. We sometimes had trouble with them but it was rare.

Not only are monster cables terribly over priced, they are utter garbage.”

They suck as much as they possibly can without any concern for the long term health and reputation of their holdings.

How do I know? I used to work for one of their more profitable companies… and they never invested a nickel in the employees; either in paying or hiring them.”

“Every Skullcandy item I’ve ever bought has broken within months.

“Luxottica, so essentially almost all sunglasses.

You used to be able to get a filling, meal on the cheap. I remember when my family would stop on road trips – family of 5 for under $35-40.

Now it’s d**n near $10 a single meal, and the food quality has not improved.”

26. Better options out there.

They look nice, but at that price point, there are better options for headphones.”

I live in India and the price of their coffee over a local coffee stall (especially in South India) is roughly 20x.

No not joking, its f**king 20x the cost in a country where people have trouble affording the cheap one in the first place. What a f**king rip off.”

Tell us what brands you think aren’t worth the money.