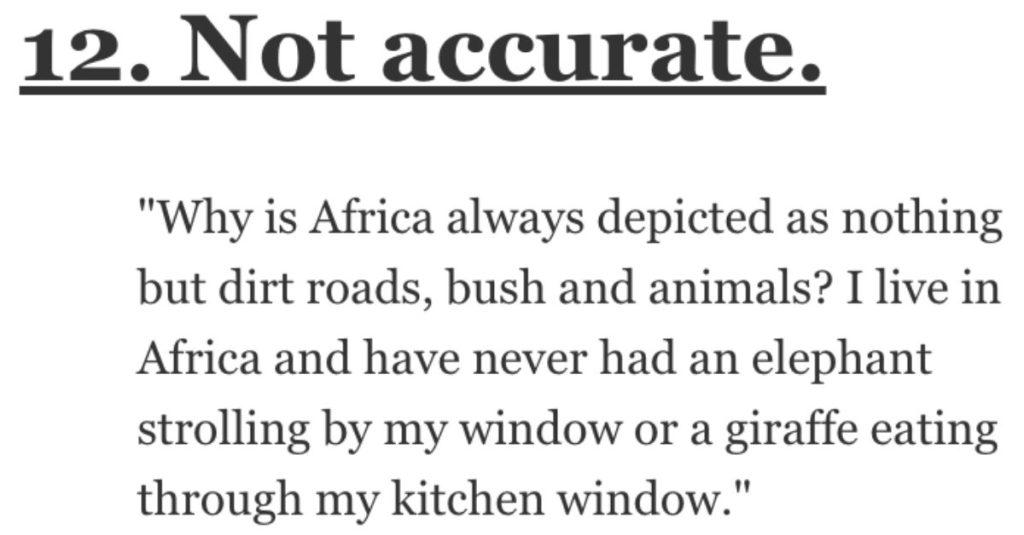 27 People Discuss the Unrealistic Things in Movies That Annoy Them

I’ve loved movies since I was young.

But even I will admit that there are a lot of unrealistic and crazy things we see in movies that tend to happen over and over again.

What unrealistic things in movies annoy you?

Here’s how folks on AskReddit responded.

“The fight or flight response doesn’t seem to exist in horror movies.

If I come across a friend’s dead body in the woods, my first instinct isn’t to investigate the scene.

I am getting the f*ck out of there and calling the police.”

“Most people in real life know what zombies and vampires and such are, but in a lot of movies people act all perplexed like “what the heck is THIS new monster thing?”

And scratch their heads…”

“When someone asks for a beer, they never specify what kind of beer they want but the bartender always seems to give them the right one.”

“Why is Africa always depicted as nothing but dirt roads, bush and animals?

I live in Africa and have never had an elephant strolling by my window or a giraffe eating through my kitchen window.

Also, we have some really nice houses, not just huts.

And don’t get me started on the “African/Wakanda” accent they used in Black Panther….”

“When they try to casually slip in something that you just know will be crucial later on in the film.

Like someone saying to the hero, “how’s that online course in lock picking going ?”

You know he’ll be picking a lock at some point later .”

You waited for the last possible minute to buy that outfit you need (it’s going to change your life!) you’re not going to be laughing and goofing around in the dressing room.

You’re going to be going, “It doesn’t fit!” while your mom stands outside the door saying, “Do you think a different size would work? Do you want me to ask if they have a 12?” “NO I HATE IT THERE’S NOTHING HERE I’LL NEVER FIND ANYTHING I’M NOT GOING TO THE PROM”.”

“In a horror movie, everyone acts insanely stupid.

No one ever believes each other, they go outside to investigate a loud noise when there’s been a string of murders, etc.

“Our best chance is if we split up”.”

“Getting a parking spot right in front of the address in a big city.

Falling 15 feet and then catching yourself by one hand on a tiny protrusion.

A character just enters the house and starts talking. Even when the scene is in an interior room. No doorbell, no getting the door.

Adults walking around an elementary school without being questioned or accosted by staff.”

“People who yank out their IVs.

I tugged on mine once and I f*cking cried.”

“Working as a waitress, or some other near minimum wage/poverty wage job and having excessive time off and money and things like huge houses.”

“The standard car flips over five times and catches on fire and every single time, Vin Diesel walks out unscathed.”

I don’t know a single real human who has ever used this method when stashing keys.”

“People Googling exactly what’s happening to them and getting the answers they’re looking for. Happens a lot in scary movies.

A house is being haunted by the ghost of a tall man, and the owners Google “Tall man ghost” and find exactly the article that explains who the ghost is and what happened to him.”

“”I need information from this computer.”

Tech guy runs over and starts hammering wildly on the keyboard, “I’m in!”

The keyboard is plugged into a xbox, and the OS is windows 2000.”

“When there are 2 armies marching toward each other in formation but as soon as the battle starts it all breaks up into thousands of 1 on 1 melee duels completely ignoring the importance of unit cohesion, discipline, training, and morale.”

“People climbing through ductwork to get in between rooms.

Most ducts are not big enough for a person to fit in.”

“Attorneys pacing around during a trial and attorneys approaching the judge without asking.

My personal favorite is when a new, d*mning piece of evidence or witnesses is presented in the middle of trial to the complete surprise of the opposing party.

Like sorry buddy but discovery deadline was a month ago. You should know this.”

“In medieval/fantasy, whenever there is a siege weapon they fire one shot and then “CHARGE!”

Like, “b*tch it took you a month to erect that trebuchet and you’re only going to fire it once?”

During the siege scene in “The King” they sat around for days and days hurling stones at the castle until the wall finally fell and I was like “Yes. Thank you.””

People hanging off of anything, one handed, for long times, holding on to other people, pulling themselves up.

General population can’t do a pull up.”

“Blows to the head knocking someone out for exactly as long as is convenient for the plot with no long term consequences whatsoever.

Even otherwise “realistic” shows and movies are guilty of this. In reality, and blow to the head strong enough to knock you out is likely to cause brain damage or even death.”

“Walking up to a microphone and it squeals feedback.

In reality, that shouldn’t happen unless the sound person is a moron.”

“Any movie where the villain who is beating the sh*t out of the hero and decides to brag or monologue before killing them, which gives the hero enough time for a sneak attack or for somebody else to intervene.”

No one eats it. No one enjoys it.

People go to restaurants primarily to order something, have it arrive, and then have an argument and storm out.”

“When people slice the palm of their hand open for a drop of blood.

That sh*t will take FOREVER to heal, just prick your finger.”

First, nobody confesses to a crime while on the witness stand at somebody else’s trial. Nobody.

Second, have you been to court? It’s 97% waiting around, 2% wondering if you have time to go to the bathroom, and 1% anything to do with you or your case.”

“Turning on the TV and what they needed to hear is on TV on the right channel at the right time.”

“Bad guy receives a mortal wound like a point blank gunshot to the torso or deep knife wound and just lays there bleeding profusely for a minute with the protagonist immediately forgetting about them.

Then is able to somehow stand up and have like an 8 round boxing match with the protagonist before finally being finished off.”

What things do you see in movies that really annoy you?