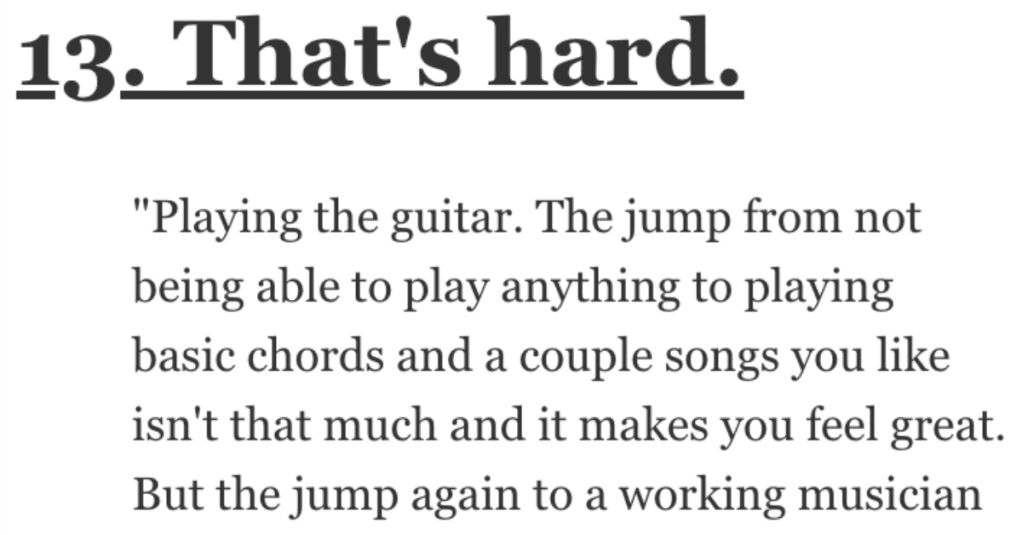 I remember the first time I tried snowboarding when I was in high school.

I thought to myself: I’ve skateboarded and I’ve played hockey, so this will be a piece of cake!

Well…it wasn’t. I think I fell about 100 times that day…before I eventually got the hang of it. But I learned my lesson!

What did you think would be easy until you tried it?

When I was still in college, I’d either procrastinate way too much or I’d work nonstop.

I was never able to find a balance where I was still getting sh*t done but not burning myself out.”

2. Harder as you get older.

I understand it’s far easier as an adolescent but, whew, conversational German for a English speaker is very hard for me.”

“Making (and maintaining) friends as an adult.

I never really put much thought into this, until I had no friends left in adulthood, and realized how easy it used to be as a kid in school in comparison.”

“I am not a really confident person but I keep working on my confidence.

There was a time when I tried the “fake it until you make it” approach.

Faking it is harder than expected.”

I made a couple of very small, cr*ppy bowls on the wheel, but the thing I made the best and far more often was a giant mess.

I can sculpt fine but those stupid bowls get me.”

“Socializing with a group of people I usually wouldn’t hang out with.

It’s either that or I stay alone forever…but I just can’t find any sort of relatability to these people.”

“On the first trip to England…

After renting a car, it proved to be a considerable challenge to drive on the “other side of the road” from what I was used to – especially in the roundabouts and on major highways.”

Doing the job physically itself, I have no problem with.

Mentally, it’s the drain of bad management and feeling like you’re wasting your time.”

“Throwing dough to make pizza.. and pretty much the rest of the pizza making process.

Getting the dough into a round 18″ pie is tricky. Then getting the sauce even and not on the crust is a process. And getting all of it done as quickly as possible…

After several hundred pizzas I can crank them out pretty good now though.”

I grew up on skis and when I tried snowboarding, I literally just rolled down the entire mountain like a slinky on the stairs.”

11. Looking for the right one.

“Falling in love with the RIGHT person.

My mom used to tell me to be careful who you date because you can fall in love with anyone.

Fell for many frogs before my hubs came along and we’re close to our 13th anniversary.”

I was like yeah I smoke and drink but I can definitely run like the wind. Ha, no.

Quit smoking after my first run and am now 3 years smoke free!”

The jump from not being able to play anything to playing basic chords and a couple songs you like isn’t that much and it makes you feel great.

But the jump again to a working musician is astronomical.

I tried and just got burnt out and it wasn’t fun anymore.”

“A lot of the parts from that Ninja Warrior show. I’m a very physically fit guy and always thought that first course looked like a breeze.

Then I found a local gym with the different elements set up. Even just that very first part where you hop across a few platforms was tough.”

OMG the temptation of eating cookies is so big.”

“Trying to stop staring at my computer screen all day long.

I keep resolving to stop doing it, but then I just keep falling down rabbit holes of different websites.”

I was watching the US Open on TV and seeing the players chatting with their caddies as they took a leisurely stroll down the fairway in the sunshine, I thought ‘That’s the game for me.’

So I borrowed a set of clubs and went out. On my own. In the UK. In winter. I got home wet, tired, hungry and covered in mud and scratches with twigs in my hair after hitting about 200 strokes and losing over a dozen balls.

I played for a couple of years but I was still pretty bad at it.”

I always used to think adults were crazy when they told me as a kid that being a kid is the best.”

All through my teenage years, I thought it’d be so simple to get a good paying job, never get sick and just exist, feeding myself, entertaining myself.

Then I leave home and struggle every. single. day.

The mechanics of it seem so obvious and simple but it took me months of trying before I landed one and I was never able to do it consistently.”

“Getting out of a toxic relationship.

I looked down on women who complained about being in an abusive situation, i thought they were weak. “They can just leave” I would say to myself.

I was wrong and I apologize to any woman I thought negatively of because of that.”

I was so confident that because I was good on regular skates that I’d be good on ice…boy was I wrong.”

“Grocery shopping by yourself is a f*cking nightmare first time around.

ESPECIALLY when searching for paprika, for some reason.”

Swimming 100 meters in water is honestly like running a whole mile when you’ve never swam like that before.”

25. Hockey takes a lot of practice.

“I know how to roller skate, even ice skated with figure skates. I can skateboard, mountain bike, ski, wake board and water ski.

When I laced up some hockey skates and tried to even resemble skating like a hockey player it blew my mind how difficult it was. Insanely hard.

I gained a new respect for hockey and how those players can automatically move effortlessly while controlling the puck with a stick. Absolutely awesome.”

When I watched my mom I always thought ”oh well, what’s there to learn? Just throw some stuff together and bam, done.”

Here I am, 29 years later with a cold, not having a single clue how to make homemade chicken-soup.

Also yes, called mom for it. It was delicious.”

I can get my mouth to the right spots at the right times, but controlling my breathing proved far harder than I expected.”