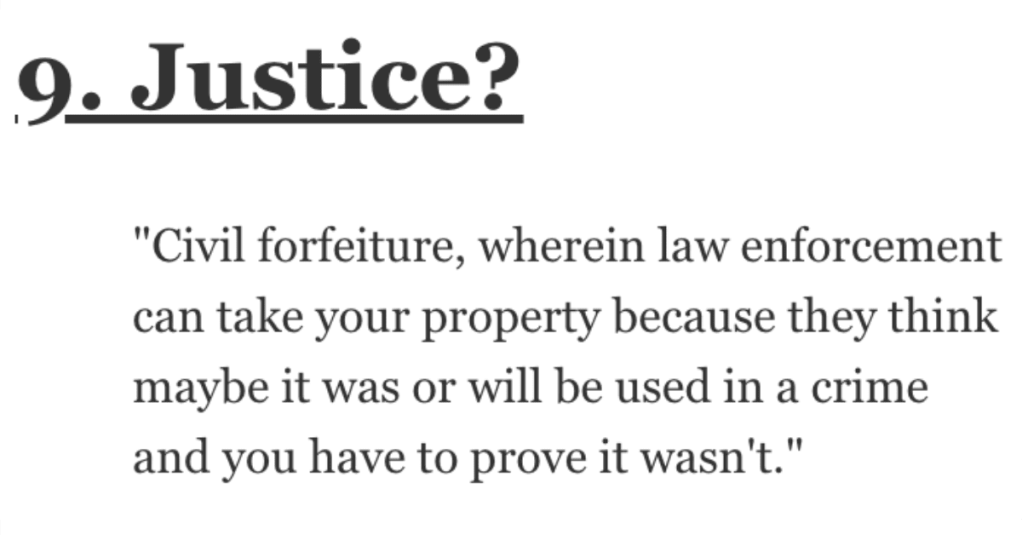 Our world has enough injustices and failures to fill a million history books.

It’s a sad fact of being a human being on this planet.

And some of the things that are totally okay, at least by the standards of the law, are enough to make any person shake their head.

People on AskReddit talked about the worst things you can do that are still legal.

I get they are just trying to do a living, but if I block your phone once, DON’T CALL ME ON A NEW NUMBER aaaaaargh.”

We had a new girl in our department that did not want to be there and I think she deliberately made herself as stank and throat wretchingly smelly as possible, it literally made my eyes water working next to her.

Funny enough she was a newly wed, I feel for some people not being taught how to care for themselves hygienically, but I doubt that was her problem. The smell still haunts me.”

“College book prices and practices. Change a few words in a math book, that’ll be another $100 please.

Oh, you realized that you can use the book from 10 years ago and succeed Actually, we require you get the new book. It should literally be illegal.

Oh you realized you can get the book cheaper from a friend? Actually we’re doing online books now and you need the personalized code. We change it every year even though there have been no breakthroughs in this subject!

Knowing the college struggle, I have no f*cking clue how this is allowed to exist. It should literally be illegal.”

“Lying through your teeth on “news” shows because you claim you’re actually “entertainment”. Even while it has “news” in the title of the station.

Being able to lie through your teeth on an opinion show just bc it’s an opinion show. Opinions should be opinions about facts. Opinion should not be an excuse for slander or making knowingly false statements in the media.”

“Underage marriage. If the parents say that it’s okay for the girl to be married, they can be.

Even worse once the child is married the spouse becomes the legal guardian so they can’t divorce them or any other guardian related item until 18 and by then it could be to late.”

We’ve seen time and time again where Law Enforcement has the wrong address and some innocent person ends up dead because of a logistical mistake.”

“Here in Canada, female g*nital mutilation is common in the Somali community.

The police and the government are very aware of it but because its “cultural,” no one wants to stop it.

It is still legal in Canada.”

“Not giving your employees emergency sick leave, PTO, etc. because you have less than 15 employees so by law you don’t have to.

As an employee you also can’t pursue legal action through the disability act, coronavirus relief acts, or employment law, because the employer has less than 15 employees.

My advice? Don’t move to Florida.”

“Civil forfeiture, wherein law enforcement can take your property because they think maybe it was or will be used in a crime and you have to prove it wasn’t.”

“The cost of healthcare in the US.

My mom had a large grapefruit sized bowel obstruction a few years ago and had to have emergency surgery to save her life. She followed that surgery with a 1 week stay in ICU and another 2 weeks in a regular room because the damage was so bad that they had to remove a LOT of her colon/intestines and place a colostomy bag.

Her bill was almost $1 million when all was said and done. And she didn’t have insurance at the time, so that entire burden was on her and my dad. Our healthcare system is f*cking atrocious, and frankly, embarrassing.”

11. Creeping some people out.

And not only because of the fact it’s creepy, but I feel like it’s stressful on the kid and on their body image.”

“Sending letters to home owners labeled “IMPORTANT MORTGAGE / FINANCIAL INFO” or “LAST WARNING / NOTICE” and having the inside look exactly like a bill, letterhead and little box in the corner with figures inside… all to then say “refinance with us” or “don’t miss this opportunity for etc etc”

Makes me heart skip every time thinking I’ve forgotten some critical bill until I open it.”

“Being forced to fork up your personal data and access to EVERYTHING in your phone to use a stupid app that makes a picture of your dog sing.

It should not be allowed at all.”

“When corporations are fined millions of dollars for breaking the law they can write it off on their taxes.”

‘Hey, let’s make children hate themselves so much that they’ll either lie about who they are for the smallest crumbs of validation or just commit suic*de! Either way, that’s one less gay to worry about!’

Now excuse me as I go throw up.”

Still don’t have $854 on your next payday? Cool, just pay the interest and roll it over another 2 weeks. You could roll it 3 times before we asked for the full amount.

The place that I worked at would allow customers to take out a new loan after that 3rd roll to start the process all over. This place had customers who had been stuck in this cycle for YEARS.

I worked there in 2008 for about 5 months. Xmas came and the big boss asked why our default numbers(people past due on their payments) were so high? I said, “If I were in our customers shoes, I would be buying presents for my kids and trying to feed my family instead of paying on this loan.”

He grunted and snarled at me. Then I gave my notice.”

“The way that Comcast has somehow managed to become a monopoly in so many areas, like the area I live in.

“Maybe not the worst, but I hate people who market “alternative medicine” to vulnerable people.

I only really experienced it last year when my mom had to get treatment for cancer and did some research online.

There were so many companies that market essential oils and things like that as a genuine alternative to chemotherapy.

I just think it’s f*cked because they’re targeting people who are scared (who wouldn’t be scared of chemo?) and putting them in real danger.”

“Cops are allowed to lie in interrogations.

Lots of false confessions made by people that are told their DNA is all over the crime scene, etc.”

Businesses earning big cash on paying their workers a wage that is barely enough to survive, making them do a mindless boring job 14 hours a day.”

“Banks charging fees for literally everything: withdrawal, text notices and small but frequent amounts I don’t even know what were for.

I knew a Marine once that killed a s*x worker abroad because he found out they were a pre-op transgender woman after they were back in the hotel and had already started having s*x.

He murdered her and then went back to the ship. Spent some time in prison and was released recently.”

“Lawsuits over every little thing.

They have always found loopholes to do this even in ordinary times, but during this pandemic it is frankly nauseating to see how many companies are taking government assistance in the form of emergency relief, employee pay assistance etc., and then still turning around and paying dividends to shareholders, CEO bonuses etc.

It’s impossible not to see how the rich get richer and the rest of us get poorer – shareholders get guaranteed gains even at times when these business claim to be floundering to the extent that they need an injection of public money – which the rest of us will be paying for in taxes for years to come.

The rich will of course also find some loophole to avoid paying those taxes as well. So there’s that…”

“Women being able to have child after child even when all their previous children were taken from their custody due to drug use and neglect.”

I cannot for the life of me understand how is it legal to stalk a person for blocks and blocks sticking a camera into their face and even take pics of their minor kids.

And don’t come at me with the “celebs knew what their were singing up for when they got into Hollywood”.

They’re human beings too, they deserve an ounce of privacy.”

“US politicians having no term limits.

Like dude, you’re 78 and you’ve been in Congress for over thirty years.

You’ve been in politics since the civil rights movement.

Now it’s your turn to sound off.

In the comments, tell us what you think is the absolute worst thing you can do that is still legal.