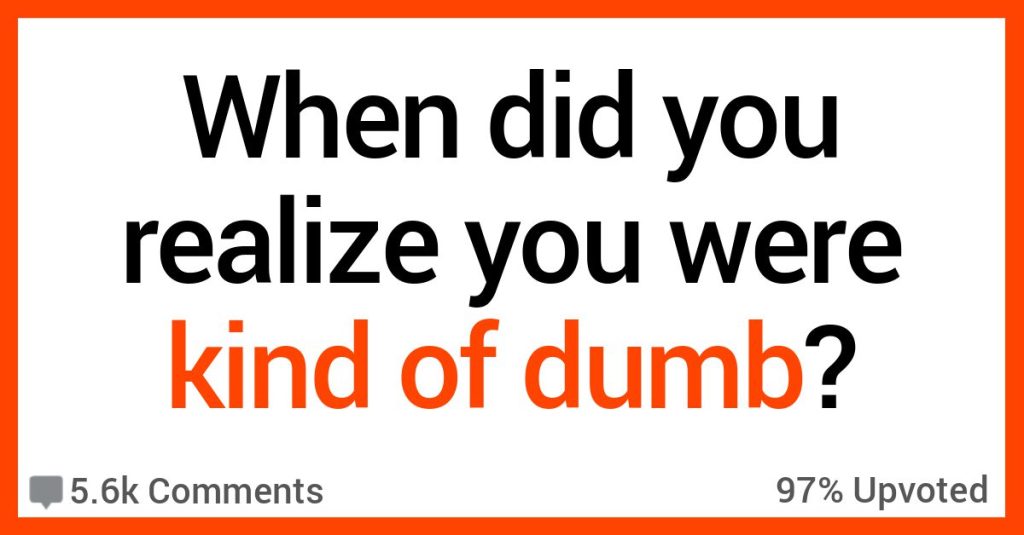 Do you ever do or say something that causes you to look in the mirror and say, “huh, I guess I’m really not that bright…”?

Of course, you do! We all do it at some point…I think.

Let’s get DUMB with some folks on AskReddit.

“I was out clothes shopping when I spotted someone I recognized.

We made eye contact and smiled at each other.

It was just then I realized I was walking towards a full length mirror.”

“I was at a young age (8ish) when I thought the Star Spangled Banner said “Jose, do you see”.

That was a moment.

“Was a bit distracted while unloading my shopping.

Accidentally put my novel in the freezer and ice cream on the shelf. Didn’t notice until the next day.

By that time the ice cream was spoiled and the book was mildly iced over.”

“I was shocked to learn that hearts and diamonds are always red cards and spade and clubs are always black in a deck of cards.

I was told last night and felt so dumb.

“Deployed, heard word of an unidentified drone flying relatively close to our area, so I’m just sitting there staring up at the night sky.

I really have never seen a drone during the night time, so I didn’t really know what altitude to expect them to be flying at, or if they had lights on, so I was pretty clueless. This dim light catches my eyes as I’m scanning the sky and I focus in on it.

The light seems to be getting bigger and bigger, and I couldn’t figure out what it was. So i ended up calling it up over the radio for the guys I was working with to come outside and take a look. They came outside, looked at the light in the sky I was pointing at, looked back at me, and then called me a dumb*ss.

It was clouds slowly drifting in front of the moon. So I think that one was a mix of my own stupidity and tiredness.”

Yes, I was completely sober.”

I bought a huge cage for him, some food, but when I went home, I realized, that I forgot to buy hamster.”

“I was peeing in a urinal, then I thought “I think I accidentally walked into the girls bathroom!”

I couldn’t leave because I was peeing, so I was just terrified some girl was going to walk in and see me.

I finished peeing, went to the sinks, and realized how stupid I was.”

“I found a spoon in my freezer and while thinking “hmm why is this spoon in the freezer?”

My tongue got stuck and I pulled the spoon fast off my tongue.

I then bled for a while after as I had torn my tongue in several spots.”

“I put my phone in the freezer to charge. I remember having the thought that it would actually work. Several hours later, I couldn’t find my phone.

When someone called me, my brain refused to put together that the reason why my fridge was playing music was that my phone was in it.

I just thought it was a feature I had missed.”

“I was friends with some twins. I said happy birthday to one of them.

The other asked “What about me?”

“Thats crazy y’all even have the same birth-oh d*mn, I am actually stupid.””

“I was in my late 30’s before I realized you can raise the lever on the toaster to lift up the toast and easily grip it… instead of playing Operation with your fingers and the toaster slots.”

“My BF was weighing our suitcases the night before a flight.

He did the classic, step on the scale and then step on the scale with the suitcase and do the math technique. One of the bags was a couple of kg over the limit so I reassured him that by morning he will have lost a bit of weight which might help get back under the limit.

Didn’t think that one through.”

“I spent a good 45 seconds trying to open a can of beans with a can opener and couldn’t for the life of me figure out what I was doing wrong.

I remember thinking it had been awhile since I’d opened a can but really?

Then I took a good, hard look at what I was doing and realized I was trying to open a can with a potato peeler.”

Her: “Did you check the fridge?”

And there they are just like the 100 other times I can’t find my glasses.

Why do I put them in the fridge?”

“My dad is a prankster.

When I was about 18 he tried to convince me that Kenny Rogers owned Kroger. And it was really convincing. It didn’t help that we called it Krogers with an “s” and not Kroger, which is correct.

He kept saying, “He even named it after himself! Kenny Rogers, K. Rogers, Krogers!” It made sense, but knowing my dad my bullsh*t detector was going off so I announce that I’ll find out once and for all and call the local Kroger and ask.

I called, asked for a manager. He gets on the phone and I ask if Kenny Rogers owns Krogers and relay the argument my dad gave. The dude laughs hard for a solid 2 minutes, thanks me for the best prank call he’s had and hung up on me.

25 years later my dad STILL asks if I found out if Kenny Rogers own Kroger yet.”

“This one time I was asked to ref a football match, was gonna flip a coin to decide which team would start.

I asked for a rep from each team, asked the first guy whether he was picking heads or tails. He picked heads.

I then asked the other guy what he was going to pick.”

“Found a lost smartphone when walking somewhere. It was the exact same model as my own phone.

Dropped it off at the nearest police station so they could contact the owner.

Found out later that I had dropped off my own phone instead of the one I found.”

“One particularly hazy morning I went to the cafe, paid for a cup of coffee, then promptly turned around and walked about a half mile down the block before realizing I never got my coffee.”

“I said out loud, “Wouldn’t it be crazy it Halloween fell on a Friday the 13th”?

It would be crazy because that’s not how dates work.”

“I was talking on the phone with my mom. After a while I got frustrated because I couldn’t find my phone anywhere.

I told my mom about it and she replied: “wait a second, I’ll hang up and then call it so you can find it”. I figured out how dumb I was as I was staring the ringing phone in my hand.

We had a good laugh about it. But apple really doesn’t fall far from the tree.”

“I’m from the South and dated a girl when I was younger.

First time meeting her mom, in a heavy New York accent, she asked me, “you like dogs?” I said, “no thanks, I’m not hungry.”

It took me way too long to realize she was talking about the two giant pets they had, which were literally in between us, and not hot dogs.”

“Asked a friend what year he graduated from high school…. at our reunion.”

“During a dental appointment, my dentist asked me to bite down on this little strip of like sand paper?

Not sure what it’s called exactly, but she says okay now “tap, tap, tap” but while she said it, she motioned with her hands like this:??

What she meant was tap my teeth down on the sand paper a few times…I took it as okay I’ll tap my fingers together – and just mimicked her gesture.

She was trying so hard not to laugh at me when I realized what I had done.”

“In my kitchen I have one cabinet for bowls and plates and another one for cups. This hasn’t changed since moving into the house four years ago.

About 75% of the time, I open the wrong cabinet to get what I need. Even when I try really hard to focus on opening the right cabinet, I still regularly get it wrong.

That was the final straw that validated my stupidity.”

“When someone told me they had the same name as me.

I said “Really? What’s your name?”

Sitting across from my ex-wife in a Mexican restaurant in late 2019 after our thousandth argument, I very calmly, but firmly, said “we’re the stupidest people on the planet.”

A couple days later she moved out.”

“In the army I was learning how Humvees worked. You have to lock the doors from the inside by slamming down a bar.

It’s called combat locking the door, then you put a padlock on the driver door to secure the Humvee. My squad leader taught me a trick to reach through the window and slam down the bar instead of having to crawl through and reach the bar for each door.

Then you just push the window up and you are done. I thought I was high speed when I learned this so the next day when I was showing off my new trick, I locked all 4 Humvee doors faster than anyone! What I forgot was that you are not supposed to combat lock the driver door…. this meant the Humvee was completely combat locked and could only be unlocked from the inside.

I had to disassemble an armored Humvee door which took hours and was roasted the entire time by everyone around.”

Sorry to do this to you…

But now we want to hear your dummy stories!

In the comments, tell us about the times when you thought you weren’t too bright! We can’t wait to hear from you!