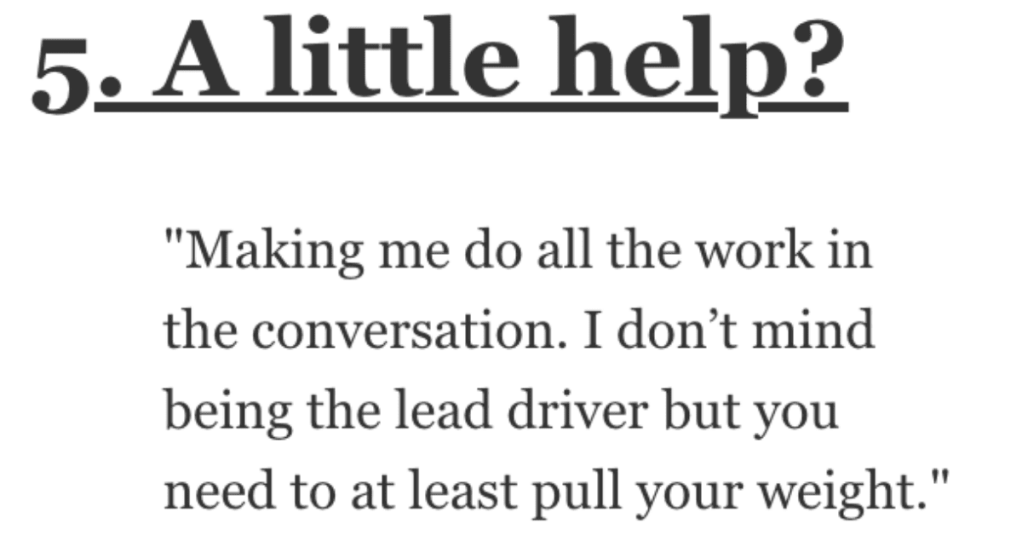 Are y’all ready to hear about some dealbreakers?

And the things mentioned in this Reddit thread DEFINITELY would be.

What first date behavior is a dealbreaker? from AskReddit

What horrors should tell you to not schedule a second date?

Once, I was talking to this girl online, and things were going pretty well, so we decided to go for dinner.

I showed up to the place five minutes early, so I waited. And kept waiting.

Texted her 15 mins after we were scheduled to meet, but didn’t get a response.

Waited for another 45 mins then left.

She messaged me later saying that she wasn’t there because she lives in Indonesia.

I live in New Jersey.

Finding out that the reason why they asked you out is because they wanted to make their ex jealous.

To make it worse, she had her friend invite the ex-boyfriend as well….

3. You got somewhere to be?

Ordering your food to go and quietly watching me eat while you wait to leave.

Showed up late “getting all done up” (told via text) but was in a ratty hoodie, and her clothes smelled… Musty.

UNTIL THE MOVIE STARTED.

Then she wouldn’t shut the f**k up, kept staring at me, and asking the dumbest questions like “how’d you get so tall?”, “Do you like movies?”

Making me do all the work in the conversation.

I don’t mind being the lead driver but you need to at least pull your weight.

I’ve been on some dates that felt more like interviews.

I went to see a movie with a girl who I’d been talking to for a few weeks. We went to see a movie and she starts sucking her thumb like a baby while watching the movie. I’m thinking “weird tick I guess but okay”. Halfway through the movie she gets really emotional, drops to the floor and starts rolling around like a toddler. After about 10 minutes she gets up and acts like nothing happened, I don’t know what to say at this point.

At one point during the day she’s telling me about another date she went on where she saw her friend halfway through and was speaking to her and the guy just walked off without saying bye or anything. As she’s telling me this we bump into a girl she knows, they’re talking for a bit and I try to introduce myself but she cuts me off to talk about something different.

They’re both acting like I’m not even there, this goes on for f**king 30 minutes. Half an hour of me just standing there like a d**khead as if I’m I don’t know either of them while it seems like they’re both actively ignoring me. I try to say goodbye but it’s literally like I’m completely invisible. I figure at that point either she didn’t like me and somehow planned this intervention from her friend to save blatant turning me down or she’s just a rude person so I just walk away.

I get on the bus to go home and I get a message “hey why did you walk away?”

I was 17 at the time and it’s the strangest date I’ve ever been on to this day.

Asking me to suck his d**k before even having a real conversation.

To this day, I still don’t know how to say his name or where is he from.

When I ask someone out on a date, especially a first date, I expect that I will pay for the date.

If it’s a restaurant I don’t make a big deal about me paying and I don’t care if she makes any offer to pay or not. It’s okay if I pay, or she pays, or we split, but I’ll assume I’m paying and at least sincerely try if she’s okay with it.

But it is a deal breaker when I think she’s assumed I will be paying and orders extra expensive stuff because she thinks it will be free to her.

My buddy went on a date, and the woman ordered two entrees, so she could take one home for later. Brazen about it.

Going on a dinner (or lunch, breakfast, etc) date and ordering nothing because you ate before you came or aren’t hungry.

It’s incredibly awkward to be the person on the other side of that since you showed up hungry and now you’re supposed to just eat in front of the other person like that’s not weird?

If I’m ever single again and this happens again I’m just going to go home ?

Well on one first date I had, the dude told me he used to be in a gang and killed 6 people, drove us into oncoming traffic, told me that there were 3 loaded guns in the car (this ride lasted at least 45 minutes there and back), and told me he was bipolar and was not taking any medication for it.

Crossing a simple boundary I placed.

Had a first date where a guy held my hand while I was driving and I said “I’m not really much of a hand holder” and put my hand back on the wheel.

He took my hand back and said “thank you for your sacrifice.” This dance went on for the rest of the date.

This guy also lifted his sweatshirt to reveal a t-shirt that had Jesus on it which said “I never said that” and asked what I thought of his shirt. Felt like a weird test.

Forgetting to take off your wedding ring.

I think when they don’t even ask you about yourself, maybe that sounds weird, but I had a date that would be constantly talking about her life and friends and what not, I would ask her questions to but she never once asked me about anything…

Went on a first date a few years ago. He took me to an exclusive members-only club, bought the most expensive bottles of wine, handed me his wallet to pay for the wine, then excused himself to go to the bathroom, all so I could see how much money he had. (He had well over £2000 in there).

I thought that was weird, but chalked it up to him trying to impress me in a weird way. I wasn’t.

After that, he took me to a strip club where the bar staff knew him by name. I was incredibly uncomfortable, but it got even worse when 2 of his friends just “coincidentally” bumped into him at the club, sat with us, then hired strippers to sit on their laps. I stayed 5mins, then excused myself to the bathroom. The plan was to come up with an excuse to leave as soon as I got back. I returned, took another sip of my champagne (which I’d stupidly left unprotected before heading to the bathroom), stayed another 5mins, then said I had to leave. They tried everything they could to get me to stay, but I refused.

As soon as I stood up, I felt lightheaded, and finally understood why: My drink had been spiked!

I panicked and walked off, with my date following me desperately begging me to stay a little longer. He then offered to get in the taxi with me and escort me home. I refuse. I got to the taxi rank, got into a taxi, and we had a heated conversation with him offering to escort me home and me responding with “I’m a big girl and can take care of myself.”

Taxi driver must have sense something was off any intervened telling him I’d said no, and that was that. He drove off, asked for my address, got me home safe and sound. By then I was passed out in the back of the taxi. I don’t remember how I got indoors, but I remember waking up on the bathroom floor the next morning feeling perfectly fine. No sign of a hangover, or anything which solidified my belief I was never drunk to begin with and was definitely spiked.

In the voice of Comic Book Guy: Worst. First date. Ever.

Immediately starting with the “I love you” attitude…

Showing up late and not texting ahead of time.

You’re not “playing it cool” if you’re 20 minutes late without saying anything.

Taking me to a multi-level marketing seminar. (actually happened).

Smelly, greasy hair, and no effort in appearance.

If the first date isn’t important enough for you to even shower, then how important will the relationship be to you

Starting the date by saying that you’ve cleared your entire weekend, just in case this date works out and I’m free.

Too handsy right out the gate.

You’re still basically a stranger, I need to get to know you first.

Constantly being on your cellphone.

Showing up absolutely hammered and passing out within an hour.

Keeping talking about herself and the same subject… All evening.

Went on a blind date once and this girl kept talking about a single trip she made 5 months prior and her d**n bunny. It’s all cute and stuff but when I tried to say something about my pets or travel experience it would always go back to her. Also when I tried to steer the conversation away from anything but those two subjects she’d return after 4 minutes somehow.

On my first date with a guy he proceeded to tell me he’d had s** with 16 women and I could be lucky number 17, and then told me he generously rated me a 6/10. Solid move dude, solid move.

Edit: omg I just remembered he also told me literally while we were still hanging out that he just f**ked some other girl earlier that day…like wow is that supposed to be a good thing?

I went on a date once with a guy who seemed lovely. Funny, interesting and charming.

We had dinner and ordered a bottle of wine. About 45mins in I went to pour my second small glass of the evening. He picked up my glass, downed it in one and said ‘one glass is enough for a woman. I need you sober for what I’m going to do to you later’.

There was not a second date.

They’re supposed to be on their best behavior at this time, so it’s a major red flag if they’re not trying to be.

Having it be only about them irks me.

They’ll answer your questions with long stories about themselves and rarely ask anything in return. If they do, you’ll get about 1 sentence in and they’ll interrupt you with another one of their stories.

They somehow always feel like the date went great and they had a great time, and are surprised you are not equally as excited.

If this is how you act with someone you’ve just met, how would a relationship with you be?

They won’t stop talking about their ex.

What other first date deal breakers can you think of?