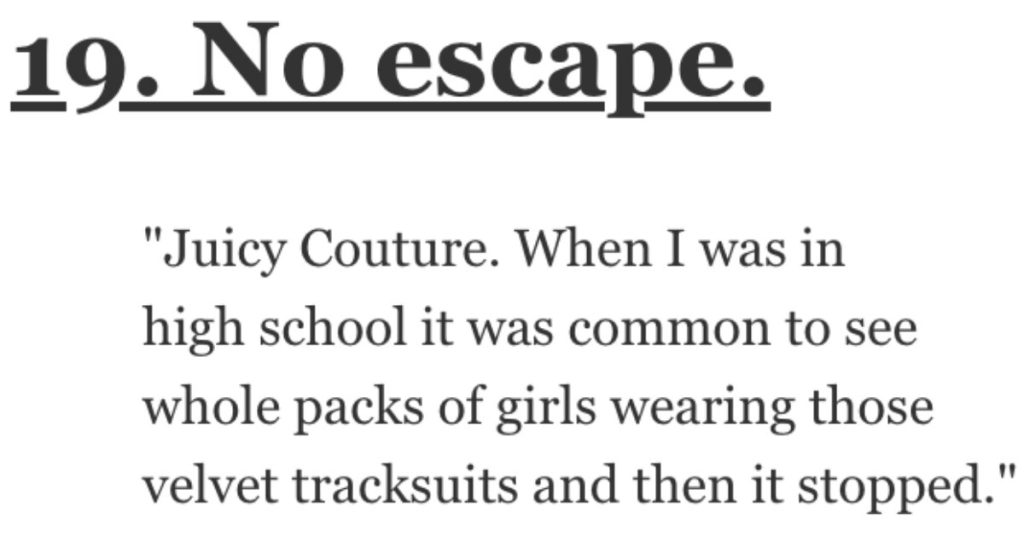 29 People Talk About Big Trends That Are Now Mostly Forgotten

Trends come and go so quickly that it can be hard to remember what was popular even mere months ago.

Do you remember when the Macarena dance was all the rage?

“Remember in the early 2000s when everyone was getting their tongue split?

I wonder where those people are now.”

EVERYONE was wearing gladiator sandals for like a year in 2014ish and then they all just vanished without a trace.

Oh also the green puffer jackets of 2017. That trend was so strangely specific.”

One kid held out his pencil, an end in each hand. His opponent would hit it with his own pencil. They take turns till one pencil breaks.

Those pencils with a bit of elasticity, like a certain faber castle were good for that game. One day, a kid brought in one of those jumbo pencils and destroyed us all.”

There was this one insane trend for awhile where you could buy anything in a bacon themed or even flavoured variety. T-shirts, toothpaste, yoghurt, energy drinks, gummy bears, and band aids just to name a few.

It was ridiculous, you couldn’t go anywhere without being battered by a blistering bu**ake of bacon.”

If you are a millennial then the Macarena is synonymous with every single birthday party when you were a kid.”

They changed colors when wet.”

“I had coworkers who said in all seriousness, we collect Beanie Babies, it’s our retirement plan.

And then the bottom dropped out of the tulip frenzy and people started to use them to insulate the walls in the laundry room.”

8. All kinds of good stuff.

There was a time when you literally couldn’t walk on the trail because of them taking up the entire sidewalk. Can’t remember the last time I saw one.

Oh and adults on the non motorized scooters.”

Like when was the last time you saw someone dabbing?”

As a middle schooler, I rememeber being shocked at how expensive JNCO jeans were.

They couldn’t have been more than $60.00 but for a 7th grader that was so much money then. And JNCO + Plastic Vinyl airwalk skate shoes was my 1997.”

12. Hopefully it never comes back.

“I’m always surprised there hasn’t been any nostalgia for Limp Bizkit and that whole genre (rap metal?).

Coffee shops having a bike on the wall

“That thing from Malcolm in the Middle where you make a circle with your thumb and finger and hold it down low, and then if someone else looks at it, you get to punch them.”

“There was that really weird time in the ’90s when grown men were wearing Tweety bird and Taz shirts.”

“Mustaches on everything from upper lips to t-shirts to finger tattoos.

That was such an odd trend.”

My mom almost ran a dumb kid over.

It was 10 p.m. in a dark movie theater parking lot away from the street lights.”

And every business and organization making their own version.”

When I was in high school it was common to see whole packs of girls wearing those velvet tracksuits and then it stopped.”

“In New Zealand we had this company release a chocolate milk.

People went f**king bonkers. It was in the news every day, people lined up outside grocery stores to get it, mass shortages everywhere. About 2 weeks in it just……..stopped.

The milks still there, people just gave up on the craze seemingly overnight. It was weird.

The milk is good, as good as chocolate milk can be I guess. But yeah…”

“That weird period in like 2013 where everything was bacon flavored.

In my mind this is the beginning of a series of ostentatious clothing evolving over time. Ed Hardy -> Affliction -> some brand I can’t remember -> American Fighter.”

My coworker has been trying to get us onboard to do the Harlem Shake during our awards ceremony.

I’m so glad that plan didn’t go through.”

“In the US, there was a fad in the 1950s of trying to cram as many people as possible into telephone booths for some reason.”

And pretty much every subsequent challenge that tried to take off. At least a lot of good came from the Ice Bucket Challenge.

I don’t recall any of the others faring well.”

“No one ever remembers this when I bring it up but vests got HUGE seemingly overnight in like 2000/01 and literally everyone was wearing them.

It came and went in a matter of months but I’m talking those vests like Marty McFly wore in Back to the Future, it always stood out to me and no one seems to recall it.”

It was huge…made billions of dollars and then just faded away. The only actor still working (seemingly) is Zoe Saldana. The male lead (Worthington?) has completely disappeared.

“”Big Johnson’s S** Wax” t-shirts. They were these t-shirts advertising some sort of surfboard wax.

All the high school “bada***es” would wear them until the teachers confiscated them.

Them, and Hypercolor t-shirts were all the rage for like a month.

Then everyone moved on to the “No Fear” t-shirts.”

“Cupcake bakeries popping up everywhere about 15 years ago.

“Tattoo” chokers in the 90’s and then they were popular again about 7 years ago.

Diamond grills on your teeth.

Scaring your cat with a cucumber and recording it.”

Tell us about more trends that used to be popular that are now mostly forgotten.