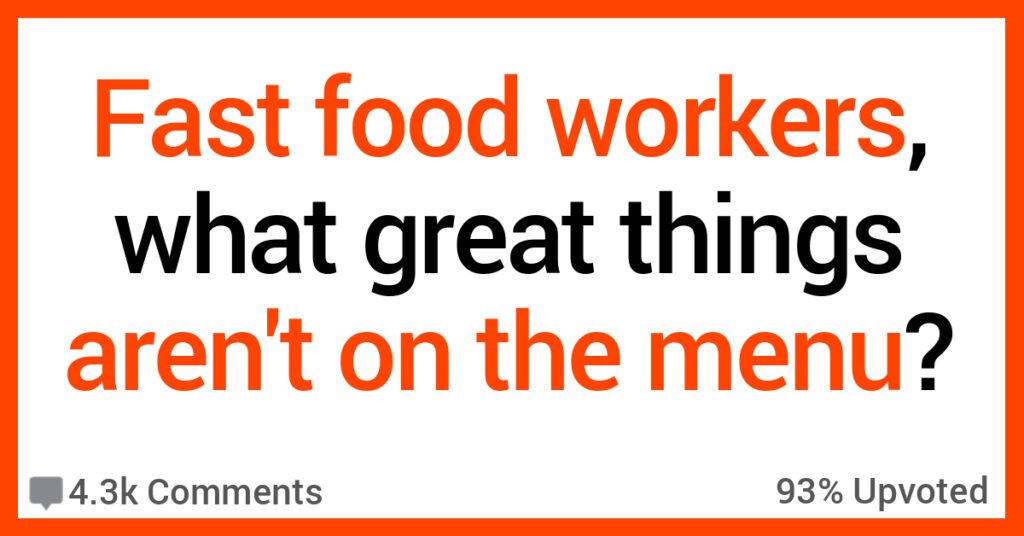 For a lot of people, fast food is a part of their lives.

They stay busy, running from place to place, or maybe the idea of fixing dinner for everyone again just to hear them say it’s gross is enough to send you running to the nearest McDonald’s.

Whatever the reason, most of us find ourselves in a drive-thru now and again.

If you’re tired of your old staples and looking for something new, these employees have come up with some pretty amazing offerings that you won’t find on the menu.

1. All Blizzards are worthy.

I worked at Dairy Queen one summer when I was a teenager. Somehow, we ended up making a mint Reese’s peanut butter cup blizzard that tasted amazing. (A Blizzard is an ice cream concoction with candy mixed throughout.)

I haven’t tried it in years. Not sure I’d still think it was that tasty. I mean, it’s technically available to customers but I never once had someone order it!

I worked at a mexican fast food place in the mall when I was 15. They served taco salads, so they had the deep fried shells. It is such a good base for anything, you could make any meal you wanted and hide it under a little lettuce, and it would just look like a taco salad.

Mostly, I just used it to get around employee meal option limits.

Worked at a cheap movie theater in high school that didn’t have anything fancier than nachos available.

You haven’t lived until you fill up a cup with popcorn and mix in nacho cheese sauce to make the devil’s cheese ball.

4. You can actually order it!

Domino’s. I take a small pizza dough, some Alfredo sauce, a whole bunch of cheddar cheese, some pasta, and some bacon. Mix those together and put them on the small dough. Raise the edges of the dough up like a bowl and run it through the pizza oven.

When it’s done top it off with garlic oil and just a little mango habanero sauce, and you have one of the best Mac and cheese bread bowls I’ve ever eaten.

If anyone wants to know how to actually order this:

-Build Your Own Pasta

You could legit call them right now or go through the online system and get this.

It’s not super unique, but we used to make fried pickles and quesadillas back when I worked at Chick-fil-A.

When I was at Pizza Hut we’d regularly stuff garlic knots with pepperoni or other meats. I also enjoyed the meaty marinara pasta with a number of veggies on top.

We once made a keto pizza for a customer. Just threw the meats and cheeses for a meat lover’s pizza into a greased pasta pan and ran it through the oven. That looked incredible and I wish I made one for myself.

7. The best thing you’ll ever order at Subway.

Worked at Subway in high school and my favorite was stuffed peppers.

I’d cut the top off and gut the pepper, fill it with cheese, steak, and chipotle sauce, and then bake it in the oven.

I worked at McDonalds last summer

Put a snack wrap on the grill and made a quesadilla

9. You need a little crunch.

I worked at a Jersey Mike’s for longer than I care to say, best “employees only secret menu” thing we had was as follows;

Toast the roll on the grill and put chipotle mayo on the top of the bun and ranch dressing on the bottom.

I was a teenager when I last tried it, but I remember it being absolutely delicious and was usually my go to meal at work.

10. Bacon and cheese is always a winner.

Worked at Culvers for a year.

I’d fill a soda cup 95% Mountain Dew and the rest with raspberry juice from the sundae bar.

Back in my college days, I worked at Domino’s. We had pre-made, refrigerated deep dish crusts.

One day, I decided to slather one of those crusts in butter sauce and pile on some cheese. It was amazing, and I made them all the time after that. Sort of like a more dense, crispier cheesy bread, and I can’t really explain why it was so much better than the cheesy bread that used regular dough.

Sadly, I’ll never have it again. Since those days, they’ve killed the deep dish and replaced it with the pan pizza, which uses dough.

KFC in Australia has these on a menu (it’s seasonal so like once a year) they’re called mashies. They potato &gravy breaded and deep-fried.

13. Any corndog is a good corndog in my book.

My first real job was at a Der Weinerschnitzel. This was… uh… 35 years ago, when I was 16. I used to make this amazing corndog thing for my lunch breaks:

Take a corn dog, slice it down one side and extract the hot dog + stick from the cornbread crust

Wrap a slice of american cheese around the hotdog

I will say, I think DW is one of the better fast-food chains out there. Or, at least, the one I worked at was. Family owned, they made some darn good food considering what they had to work with. I haven’t lived near one in ages, but I’ll always stop in and grab a chili-cheese dog if I spot one.

On the down side, the uniforms at the time were brown-polyester-everything. Ugly AF, and always wreaked of stale fryer grease. Don’t miss that.

I used to work at McDonalds.

One of the things people would order was grilled cheese sandwiches. Basically a slice of cheese between two upside down buns that was put on the grill for a bit.

15. I’m definitely going to try this at home.

Worked at KFC and the biscuits come frozen. We would put them in the fryer instead of the oven and they were the most delicious, dense buttermilk donuts.

Drizzle on some honey and they are awesome!

Made some pretty interesting blizzards at DQ. However a customer ordered the most bizarre item by far. A Chili cheese shake. He came in asking if we could do it as his friend bet him nobody would make one, but if he could get a place to make it, he would eat it.

Ordered a large which was 32 oz. I had the pleasure of making it. However we didn’t get to see the guy eat it. I bet it was gross.

I used to work at Wendy’s. We poured this special strawberry flavoring that was supposed to be used for a fruity drink into a vanilla frosty.

Stirred it up, it tasted amazing.

When I worked at Wendy’s 2013 , my favorite lil stoner snacks were a Vanilla frosty Mixed with two pumps of the vanilla syrup for the iced coffee – tased like a Birthday cake milkshake, my

Wendy’s also had breakfast so I would take the premade burritos and fry the contents on the grill – toss out the nasty tortilla on it – add it to the artesian breakfast bun we had – added the hollandaise sauce.

For lunch it would be something along the lines of a bacon cheeseburger with the cheese sauce mayo ketchup & grilled onions. With cheese fries add jalapeños of course. And if I wanted to add any more carbs to my day. I could finish it off with the fish fillet sandwich made extra crispy – chopped up & put over some well done French fries.

The strawberry lemonade – add in some fresh strawberries & blueberries from the salad bar . Literally we would just try and do anything new to switch it up.

Used to work in a concession stand at a movie theater. One of my coworkers would make chicken tenders and mozzarella sticks, stick them in a hot dog bun and slather it in marinara to make a chicken parm sandwich.

21. He should have patted them on the back!

Not exactly unique but I left a tray of wings in the oven for too long, not burnt but clearly overcooked. Made up a “new trial product” for extra crispy styled wings.

Went great until someone came back the next day and asked my manager if we had more extra crispy wings in stock.

Also used to work in concessions at a theater

Someone cooked a pizza in the oven just enough to melt the cheese & then deep fried the crust in the fryer by holding it with the funnel cake spatula. It was pretty damn good

At Taco Bell we had a LARGE secret menu.

Mastodon – Chalupa shell with hard shell instead, coated in nacho cheese. Made like a Gordita crunch.

Mastodon Supreme – See above with an extra shell, loaded with sour cream, lettuce, tomato, the works.

Churro Special – Back when the soft churros were a thing, we used to make dessert burritos with them. Breaking an apple pie, two churros, grilled.

Everything Nachos – Which was literally everything on the line. Meats, cheese, and all the toppings. Right when the XXXL Nachos released we started doing this.

We would make these for drive through people who knew what they were if they wanted them. I miss that place man. Night shifts were great shifts, and we came up with quite a few more before I ended up moving.

24. They should sell this for sure.

When I worked at Pizza Hut we would make the stuffed crust minus the pizza. It would just be a giant ring of cheese and dough.

25. I hope the passengers were the drunks…

Night shift at taco bell was awesome. I always worked drive through cause I was the only one who spoke drunk well enough.

I worked at a Pizza Hut.

Instead of shaking the cheese powder on the breadsticks, I’d used the cinnamon sugar normally used on the pretzels on them, which tasted amazing fresh out of the oven and worked well the “butter” that you’d swipe on.

The “butter” added the right amount of salt to make the sugar stand out.

27. How are these people not dead?

Similar to your Everything Nachos, at our taco bell we once created the “Rapture” burrito.

Which included every single thing on the line inside 2 12 inch tortillas, and grilled.

And by everything, I mean everything. Including stuff like empanadas and nachos.

When I used to work at a Pizza Hut they had the Hershey’s Dunkers and I thought they were alright, bit too chocolatey for my taste.

29. People would for sure buy these.

Used to work at KFC.

Took scoops of potato and made balls out of them, breaded in the crispy flour/batter and cooked them through on a crispy strip cycle before pouring a little gravy over the top and eating them.

Like big potato gems/ tater tots/ potato meatballs -> depending on where you’re from.

30. I feel like he pitched this idea and got turned down.

I used to be the assistant manager of a Pizza Hut before I had to move. I’d take a medium hand tossed dough, toss it like you aren’t supposed to (lol), and then add teriyaki wingstreet sauce as the base, cheese, chicken, green peppers, and onion.

As soon as it came out on cut table, I’d put the garlic butter on the crust and it would be a stir fry pizza with egg roll tasting crust. It was absolutely amazing and would totally make it again if I could

These sound a little hit or miss to me, but I’d be willing to try at least some of them.

If you work at a fast food or chain restaurant, share your own favorite original item in the comments!