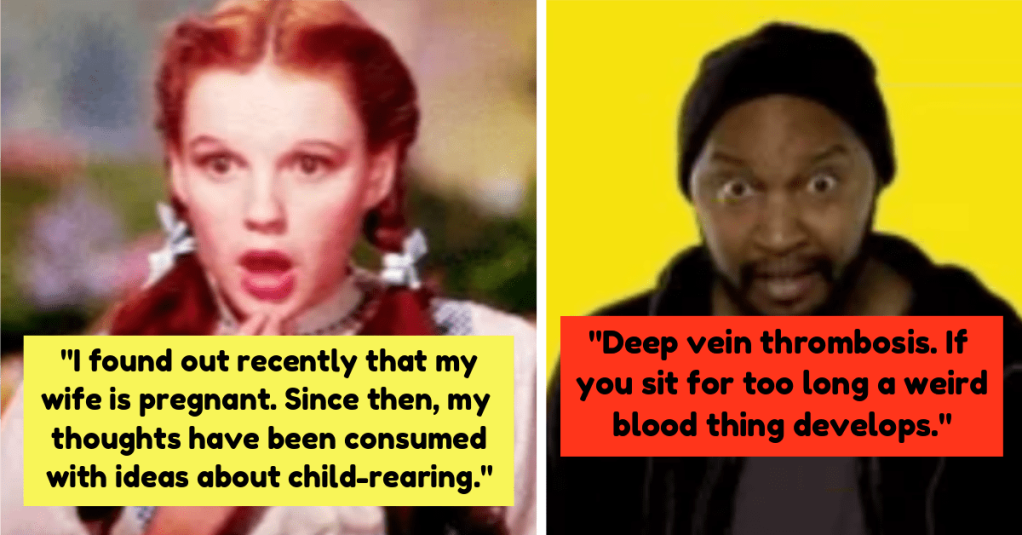 30 Overthinkers Talk About What They’re Fixated on Lately

What do you overthink about…?

If I had a dollar for every minute of my life that I’d spent sitting around obsessing over things I can’t control, I’d be so rich that I’d probably sit around worrying about what to do with all that money.

Cause that’s just how my brain do – and it’s not alone.

Overthinkers of reddit, What was it today? from AskReddit

Here are a few things the overthinkers of Reddit just can’t let go of.

I found out recently that my wife is pregnant with a little girl. Since then, my thoughts have been consumed with ideas about child-rearing.

“Omg how are we going to make sure she acquires language”

“Omg how are we going to childproof the house”

I bought a chocolate bar at the shop last night. Found it was sliced open so I had to return it.

Had to play through the discussion. Then… disaster! It got melted on the way back. Shopkeeper was convinced that the open pack was due to heat.

Changed the entire discussion. He swapped it for a good one.

I went to my former co-worker’s parent’s house to watch the dogs, cat and horses like I’ve done at least 5x and it makes me paranoid because sometimes I watch the brother’s dog and cat and sometimes I don’t…

I just don’t want the dog to starve, the cat is outside. I always have to clarify and I feel like they think I’m dumb but look, I just want to make sure.

Also this time there were no written directions specifically for me and new meds and only one type of hay for the horses.

I AM ANXIOUS ABOUT ASKING FOR CLARIFICATION EVEN THOUGH I JUST WANT THE ANIMALS TO GET PROPERLY FED AND MEDICATED. IT’S DUMB.

My boyfriend literally told me he wants to marry me. My thoughts:

“Maybe he feels rushed into it?”

“Have I talked so much about marriage that he feels obligated to propose?”

“Does he really love me?”

“why would anybody want to marry me????”

Today, it’s still the guy who ghosted me two days ago, and how he managed to make me feel completely safe with him, while most guys can’t show interest without scaring me off.

It’s interesting how that works and I’m not sure myself what I react to and not, as much of it is quite subtle.

I spent 8 hours changing the introduction text to an RPG I’m developing .

This is the 6th time I’ve went back to edit it. I’m 40% done with the game and I still have no idea how to start the game.

Ironically, I have now started using Reddit to kill my overthinking. This is my first day around here, and I am enjoying every moment of it.

Also, I was one of the popular Indian Quora writer before I stopped writing regularly there. I like Reddit more because of the anon feature and people here are very supportive.

Hope I contribute more around here and stop with the overthinking that kills me every night ?

To think that even what would be considered a small population of 100k people is nearly impossible to visualize yet it’s only .001% of the world’s population. It’s insane.

This always pops in my head every few months or so

Should I have put those comments on Reddit because I was bored, no one will read them, if they do will they be taken the right way, why did I even comment anyway.

Might I have got a speeding ticket on the way home from the dentist?

I was going 40mph on a dual carriageway and there was no sign but I saw a flash and my satnav said speed 30mph but it’s also out of date so now I have to agonize over whether I got a speeding flash or not and if so how bad it’ll be.

Literally going to overthink this for the next fortnight

I’ve really been thinking of how many moments of my life i forget, even though I don’t want to.

This morning my perfectly healthy dog was struggling to get out of bed, doing that thing that dogs with non-working back legs do. My brain went into overdrive.

Is this it? Cancer? Am I gonna lose my first ever dog?

Turns out her leg had fallen asleep. The little turd is totally fine!

I overanalyze most interactions and feel weird most of the time, so really what wasn’t it today is a better question.

I’m in the tub worrying about everything

I was a b**ch to somebody yesterday and I did not mean to be but it happened.

Now I am trying to decide if I feel worse about Being a b**ch or about people Thinking that I am a b**ch!!!

I’ve been overthinking that my friends f**king h**e me and how I’m really annoying and whatnot.

Then I wanted to reach out n be like hi have I been annoying or anything recently but I’m instead overthinking  about how that’ll just be annoying and make me sound clingy as f**k.

the feeling of stop existing is something that I still can’t process and the thought of the d**th every person that I know haunts me it’s like: me, in mi 90’s, where every friend has already d**d, and there is me, alone, in that moment that I thought it will never arrive, everyone thinks that d**th will never come, you have no one.

And the meaning of life: it has no meaning, I only live to not d**, only living the present.

If my luggage will be within my allocated weight limit, despite weighing it twice and having 3kg allowance, for a trip that is in two weeks.

Deep vein thrombosis. The idea that if you sit for too long a weird blood thing develops and you stand up and it goes to your head and you straight up d**?? No thanks.

Am I at risk at all? No. Does that stop me from panicking whenever my leg aches slightly? Also no.

Had a friend over for dinner the other night and I cannot stop obsessing about how I put too much pasta in the stroganoff and threw off the overall pasta to sauce ratio. Everything was delicious and nobody likely noticed that I meant to withhold 1/4 of the box but me.

It’s been 2 days I need to let it go and stop composing my apology email.

How can this be:

My ex and my son. How are they? Is she working? Is he healthy? Is her husband working? Are they enjoying life?

She has a terminal illness, it’s unlikely that she’ll live to see her 50’s. How far has that progressed? What happens when she passes, if she goes before me?

Is her husband still an alcoholic? Is this savings account going to be big enough/necessary for my son when he’s ready to take his first steps into the adult world?

Will he even know my name?

Saw a guy at the supermarket and he looked extremely familiar.

Spent two to five minutes staring into the void (aka the Kinder Surprise stand) while trying to figure out where I could have met him before and how different genes’ combinations may result in the expression of a same phenotype.

It implies that things have reached a steady state. Things have become stable. And it’s going to stay that way.

The heat d**th of the universe isn’t going to come about because everything is going to stay the same. Everything has to change to reach that ultimate state of equilibrium. Constant change. Constant flux.

We marvel at Kings who ruled for a long time, because stability is fleeting. It’s hard to keep control of things for so long because change keeps happening. Change is the natural state of the universe. Culture, technology, evolution, all just a series of responses to the inevitably changing universe.

I worry about making mistakes at work and how it’ll be the worst thing ever and it’ll f**k everything up, so I usually end up asking my coworkers too many questions.

Need to learn to make my own decisions and buckle up for the outcome.

What does that mean? Does it mean what was, like, cool that day? Is that a common expression?

Am I just underdeveloped in internet phrases? Or is it like, what happened today, like, “oh man, what was it today?”

On the concept that everyone has at least one bad experience a day?

I tried to be responsible and go to bed at 11pm last night.

I woke at 4 and spent the next 3 hours thinking about how I’ve been doing leg lifts wrong for the last couple of years, and how many other exercises I’ve been messing up and what I need to do to fix them.

My SO hasn’t replied to my msgs since morning so i ofc ran every simulation from smthn bad may have happened to her, to how she probably h**es me now (overthinking makes no sense) but i can’t bring myself to call cus i don’t wanna seem clingy

28. The psychology of it all

Yesterday I was talking to a colleague about ambiguities of s**ual origin (psychologist here) and we talked about a lesbian girl who is a fan of Yaoi (love between men in the manga/anime).

29. Also I dislike my knees

My boyfriend’s birthday is coming up and he has a large family of men. I’m gonna be meeting his family for the first time during this birthday bash or whatever you wanna call it.

I’ve just been thinking what the odds would be that I had went to school with one of his family members.

What stories would they remember?? How would they have viewed me given I was both the awkward shy girl but the girl a lot of ppl had assumptions about going around??

Also I dislike my knees lol

I overthink about a lot of things that are usual of things of life. But something really bothered me this time and it’s been messing with me this whole day.

I had a dream where I was using a pair of socks, pasta noodles, and wooden clips as a cellphone.

Now, I’ve had a lot of absurd dreams, being a writer, but this has puzzled me greatly. Like, how was I talking to another human being with this odd combination of items? How could they hear me? How could I hear them? How did I even dial or hang up the phone? How….?

What have you been overthinking lately?