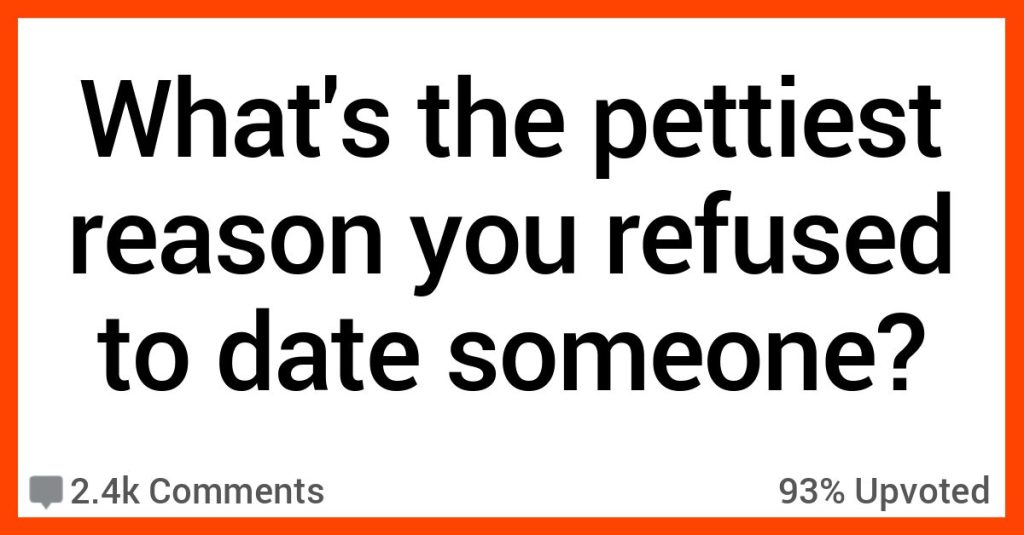 When I look back on my dating life, one of the strangest things that stands out to me is a girl I went out with a couple times…

There was nothing wrong with her. She was great. And yet for some reason, I couldn’t put my finger on…there was just nothing there.

I was bored. That’s all I could muster by way of explanation to myself. I almost wish I’d had a story like this that had more of something to grasp onto, even if it was silly.

What was the pettiest reason you refused to date someone? from AskReddit

Here are some very odd little reasons that Redditors ultimately decided to cut ties with women.

He wore a Bluetooth piece in his ear.

The constant blue light blinking from the side of his head was too much for me.

Another guy would text “dame” instead of “d**n”. It wasn’t a typo either, it was every time.

He was wearing a hideous brown fake leather jacket, it was so old that the ‘leather’ had started to flake off and parts were just now canvas.

He kept stopping to look at himself in windows and saying ‘oh god I look so hot today’ ‘I just can’t believe how hot I look’ smoothing down his manky jacket, side eyeing me, expecting me to agree with him.

I left so he could be alone with his jacket.

All The Words In Every Text He Sent Were Capitalised.

Trust Me, It Got ANNOYING.

My mom stopped dating a guy because he unfastened and refastened the velcro on his shoes throughout an entire movie.

Edit- at the movie theater.

I was the receiver of the petty reason, not the giver. When I was in college, a girl wouldn’t go on a second date with me because my dorm room was too clean.

(edit to add: what I got told by a mutual friend was that because my room was clean, it had to mean that I was gay so she wouldn’t date me)

Had the same first name as my brother and father.

Not me, but someone I worked with refused to date this very handsome, successful and kind man because “he has too many things in his pockets”

His laugh. It was the weirdest sounding laugh I’ve ever heard.

The first time I heard it I was like “Nope, can’t deal with that for the rest of my life”.

He tried to say what I was saying… as in at the same time. He started mouthing it and then slowly including more and more voice.

I would stop talking and start again…. he mimicked the whole time

He was awful in a trivia game we were playing.

I mean, really bad, like it was his first day pretending to be a human on Earth and the aliens hadn’t briefed him sufficiently.

He stared at me blankly when I said the word “republican” when describing one of my family members.

I followed up and sure enough, he literally had no idea what the word republican meant and didn’t know about our largely two-party system.

He didn’t re-rack his weights.

I will never, for the life of me, understand why people don’t return/re-rack their weights

Went on a first date to the movies. This f**king guy…instead of picking up his drink and lifting the straw to his mouth, he would put his hands on his knees, keeping his eyes on the screen, and lean over to the drink and ‘hunt’ for the straw with his face and his mouth contorted sideways trying to land on the straw.

I went out on a few dates with a guy that I had been really into for months. I was starting to realize he wasn’t the brightest bulb in the room.

Then one day he said he liked watching commercials on TV and that was that.

15. The Better Angles of Our Nature

He would call me his “beautiful angle”. He really didn’t know how to spell angel so for 5 months I put up with being an angle.

Also dated a guy who wanted to put a single-wide trailer on his parent’s front lawn and thought I was unreasonable for not wanting to move in with him once he did so.

She was a volunteer at the Zoo and when kids asked her questions she didn’t know the answer to, she would make something up and lie.

Growing up on ZooBooks and Steve Irwin, I take animal facts very seriously.

A very attractive, fun, smart woman asked me if I wanted to go get ice cream with her.

I turned her down but I guess in a way that she felt was flirty, so she kept asking.

And finally I had to tell her I was turning her down because she had both my mother’s first and last name.

She laughed a lot and agreed we couldn’t date.

She was super hot, but she smelled. I dunno if she didn’t shower or use deodorant, but she just smelled funky.

I couldn’t do it.

My best girl friend at the time was like, “just tell her”.

How do you tell a girl you’ve known for a few weeks that she smells bad?!?! So I just stopped talking to her. Brilliant.

She didn’t know that foxes were real animals.

She thought they were mythical and just in movies.

She had the same name as my mom.

Her complete inability to follow the plot of a movie.

A guy on a dating app said he wouldn’t date me because I didn’t like oysters.

She would insist on a job interview level of formality whenever we talked. […]

The first time I asked her to my place went like this:

Me: So do you want to take this back to my place?

Her: Is this an invitation for intercourse?

She called someone “a pompous”.

Nope, she didn’t say he was acting pompous or that he was a pompous a**.

He was a pompous.

Been married twice. Both were named Kim.

I don’t even talk to Kim’s now.

She kept using the word “Redonkulous” in normal conversation.

I felt my soul dying every time I heard it.

Everything was going great, thought she was an amazing girl and we’d been seeing each other for two months.

Go to her house for the first time and it was a little messy, but nothing to write home about.

From then on, the only thing I could think about when talking or being with her was that disgusting toilet seat.

Strangest bit was, she didn’t smell like that whatsoever.

Also, when I broke it off, the egg smelling stopped. So IDK.

She once wanted a burger without chips.

I wanted one with chips.

She ate all of my chips.

Her reason was that because I wasn’t eating my chips because I didn’t want them.

I asked her if I didn’t want then why did I order them?

Ladies, if you want food, PLEASE just order it. We’re very hungry. We got those fries for a reason, dang it.

What’s the pettiest or strangest reason you’ve broken it off with someone?