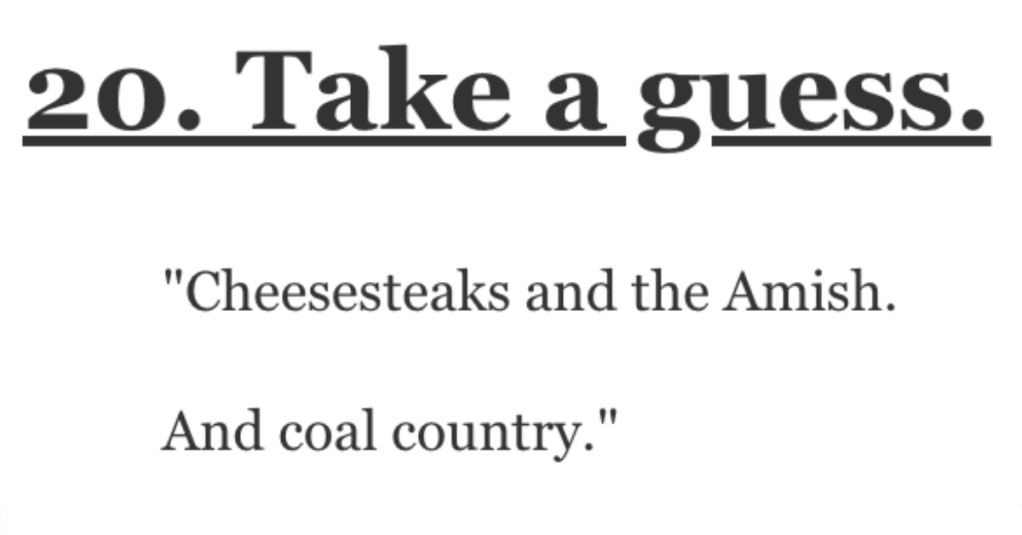 Does that sound like the beginning of a fun game, or what?

How would you describe where you’re from without actually saying it?

Check it out what AskReddit users had to say.

“We supply nearly 70% of the world’s cannabis exports, yet it’s completely illegal here.”

I’ll give you one guess…”

“I love how there’s this weird West Coast surfer vibe. I love how Old Bay is basically a culture. I love the bizarre mix of accents.

My family moved down there 11 years ago and I’m seriously hoping they stay because I want to retire there.”

“We told the NFL we don’t want a stadium or team named after our city because it’ll make the city less tourist friendly.

Yes, that really was said…”

“I would say it used to be known as a pretty hot state and it mix of Americanized Mexican food but know its most likely known for that one event in February.”

“A juxtaposition of land and sea, mountains and deserts, wildfires and earthquakes, the glamorous and the gutter.”

“Despite sky high cost of living and population density, all we’re known for is a hockey team and proximity to other more famous cities.”

“One of the most dangerous cities in America.

We also have the arch…”

We literally have some of the most breathtakingly beautiful landscapes but we’re known for Mormons.”

And Gritty the mascot!

And for k**ling a hitchhiking robot.

And throwing snowballs at Santa.”

“People locked up in basements

“Rare to get heavy snow here but when there was some knee deep snow teenagers broke into a supermarket and it turned into someone stealing a JBC digger from next door and ripping the roof off then digging out the safe with 350k the police had to make it on foot and got there when he had his hand in the safe.”

“A statue of a slave owner getting thrown into the harbour, street art and Drum and Bass/Trip Hop.

We have the same name for our people, our national bird, and national fruit.

Lord of the Rings.”

He lives in a tree and appears to only be visible to intoxicated individuals.”

“Cheesesteaks and the Amish.

If you are from the city, you’ll understand, but outsiders probably have no idea about the level it is at.”

And camping, lots of camping around here.”

They have a big motorcycle event on the beach every year.”

“I’m not actually sure what we’re known for.

“Samba, soccer and the beach.

That’s an easy one, right?”

“Being home to some of the most stupid, entitled, and all-around sh**ty human beings the world has to offer.”

“Tea, lots and lots of tea.

“Alligators, lightening, and a man who does some pretty stupid s**t and makes headlines.”

“The variety of ecosystems I guess.

To the north is mountains, to the south east is beach, in the middle is rivers and a few large lakes and a national swamp.”

The residents in our area were so in love with the sauce that after the restaurant closed a local resident wrote the news paper to get the recipe. After some detective work the secret recipe was shared publicly.

Now most of the local Chinese food places here carry the pink sauce. It’s has a tangy sweet flavor, and I’ve never seen it served outside of our area.”

Now you do the same!

And do it in the comments!

And do it NOW!