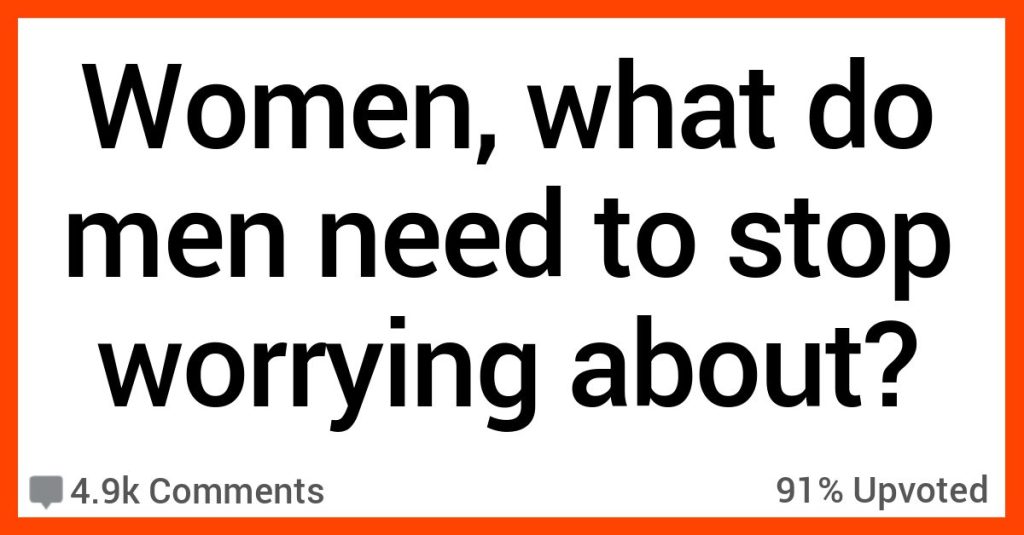 30 Women Discuss What Guys Need to Stop Worrying About

What’s up with them our bodies?

We’ve all got ’em and we all pretty much don’t like ours.

This goes just as much for straight men as it does anyone else. But maybe we can chill? So saith Reddit?

Women of Reddit, what common insecurities do men have about their bodies that women don’t actually care about? from AskReddit

Let’s see if we can ease some fears.

Dont worry about coming off as nerdy or brainy- ffs plz think for yourself and ENJOY your hobbies.

We actually dig someone with passion and honestly being able to hold conversation with depth is delicious.

Being awkward sometimes or doing something embarrassing.

I somehow find this more appealing than guys who never seem embarrassed or are extremely confident.

There are plenty of hot men that are bald.

Honestly the same ones as women most of the times.

Such as stretch marks and scars. I couldn’t care less. I have em also.

Oatmeal cream pies have stretch marks and no one turns them down!

Turns out a lot of guys can’t even cry, because at a young age males are told “boys don’t cry” “man up”

My ex h**ed his voice, he thought it was too high.

I don’t even notice voice pitches. But he let it put a fake divide between us which is why we broke up.

Of course, we are not talking about the final stage of obesity, when the weight prevents the guy from functioning normally, but 10-15 kg (sorry, I can not correctly translate into pounds).

Big men with excess weight seem to me like big bears, behind which you want to hide and snuggle tightly.

Being treated like a lady =/= being treated like a person: it is always a pleasant surprise to be spoken to by men as an equal and not have a barrier up where you’re scared th- to be teased/bantered, to not be afraid to mention bodily functions – by all means avoid farting in the same room as me for the first few dates but I’ve met a lot of men who kinda act like being yourself will put me off?

Often feel like I’m being treated like women are a seperate species and my Fiancé did not do that which did a lot to put me at ease. Date 2, I was sat on the edge of his bed admiring his sword collection and arguing about which faction is the best on World of Warcraft, none of this opening my car door and kissing my hand BS lol

I h**e when a guy, who’s clearly broke to the bone wants to take me out to dinner or buy me something to impress me.

I once went out with I guy and I could see in eyes that he was doing mental math… needlessly to say, I took the cheapest everything and ended our suffering.

Guys, it is okay if you don’t have money atm, as long as you are working/studying and is a hardworking individual with a good personality.

STOP trying to impress. Let’s just buy a bag of cheetos, sit on the sofa and watch a stupid movie. It’ll be okay.

My husband is thin and thinks it makes him look unattractive but I love it. I don’t like the body type that is super muscle bound because it makes me think some guys are smuggling water balloons under their skin.

I much prefer the very slender form where the different parts of the body flow organically and smoothly into each other. Each person is going to have a different preference so don’t be self conscious if you don’t look like a bodybuilder. There are women and lgbtq guys that like everything across the spectrum.

To me it seems like in general, straight guys just have no idea what is physically attractive in men to women, or just how varied that can be.

They just see whatever celebrity is currently all over the media and assume that’s what women want.

But we don’t all find the same exact guys hot or have the same ideals, and sometimes we even disagree strongly about it.

My point is, if you’re not a certain “type” it probably doesn’t matter, you’re still someone’s type. And also personality really really does count for a lot.

Being the best. Smartest, toughest, funniest.

It’s better to be individual with your niche interests, looks, sense of humour rather than try to be the brightest.

Also, it’s more attractive to acknowledge the success of your friends than to talk about their shortcomings.

15. Doesn’t matter who finishes first, as long as you both finish

Men always apologize if they c*m early on while having s**, but it’s really not a problem so long as they bring the woman to completion in some way afterwards.

Ain’t nothing wrong with a second round or some selfless hard work.

Getting sweaty during s*x.

I had a bf that always felt so bad if any sweat dripped onto me and I was always like ????? I literally don’t care keep going

If we’re at the point of being naked, I like the person.

I like that person enough to take the gamble that their body looks like a normal body, and there’s plenty of s*xy/adorable parts of it.

There’s definitely also going to be neutral and unattractive parts of any body, because it’s a body. I honestly have no idea what would cause me to change my mind of not liking a person based on the way they look, short of some hygiene issue.

My limited experience has included a variety of body shapes, heights, etc, and it’s all been super fun, because s*x is fun.

Please stop worrying about your d*ck or you hair or your weight or your muscle definition or your whatever else and know that for most people, we’re just happy to be there.

My 32 year old husband is currently freaking out because he has “so many” (it’s not that many), gray hairs.

I know it’s been said repeatedly already: but penis size.

Below average dude was the first man I slept with, but I didn’t care at all about the size because he was so focused on making sure I was enjoying myself every step of the way.

Largest dude was second, and he wasn’t bad at s*x or anything, but he was very focused on his own pleasure.

Current boyfriend? Like I said, average size, but that doesn’t matter at all. He’s all about making sure that we both enjoy ourselves, even if that means we need to use s*x toys to finish the job or enhance the experience.

We frequently talk about any kinks or positions or whatever that we want to try out, and that openness is the s*xiest thing about him.

I like healthy teeth, but years ago I long-term dated a guy with crooked front teeth that to me made him cuter really, especially when he laughed.

I ended up marrying a guy with a gap in his front teeth. Again, great with a good laugh.

I’ve seen a few guys try to act like they have money to burn in order to impress their dates (me included) but then not be able to pay the bills at the end of the month.

Honestly, I’ll take stability and honesty over a fancy dinner any day.

My husband is way too worried about how big his biceps are.

He was a really skinny kid (our son is the same way) so I think he always just wanted to be the big tough guy. Well now he’s got muscles and he’s constantly asking me what I think off them. I mean dude I’m into you no matter what size your biceps.

Like contractually obligated for the past fifteen years I’m not going anywhere even if you can’t lift heavy things.

Being flabby and soft.

That’s fine with me, let’s be flabby and soft together lol.

Height and d size, of course some do have strong preferences for these but I feel like a majority can agree that it doesn’t matter much in the long run.

it doesn’t mean you aren’t perfect, it means you went through a sh*t-fest and survived.

and im proud of you for that.

It’s a f*cking turn on. I mean, obviously not all people are up for that, but talk about your preferences and what you’d like to try. That goes for men and women.

Not being “ripped.” Truthfully, after 15 year together, if how you feel depends on how your partner looks, call it quits now.

It’s only going to get saggier and wrinklier from here guys.

I truly don’t care about acne.

My boyfriend is really insecure about it but I don’t mind it and he looks pretty cute with it.

Honestly the only thing that bothers me at all is a man that’s never clean. Like it’s cool to be dirty and work in the yard or go camping, but also you gotta bathe and brush your teeth at least semi-regularly most of the time. Other than that, all else is fine.

Short or tall, chubby, fat, or thin, hairy or not, skin issues, and everything else everyone else here has mentioned truly doesn’t matter. I’ve sincerely dated guys that meet all of those and more of the typically feared physical flaws. I appreciate a guy that’s just himself and let’s me be me with my perceived flaws too. I’m more turned off by someone trying to be something they aren’t or hiding who they are then I am by any physical stuff.

Seems fair enough to me!

What would you add to this list for men, women, or anyone?