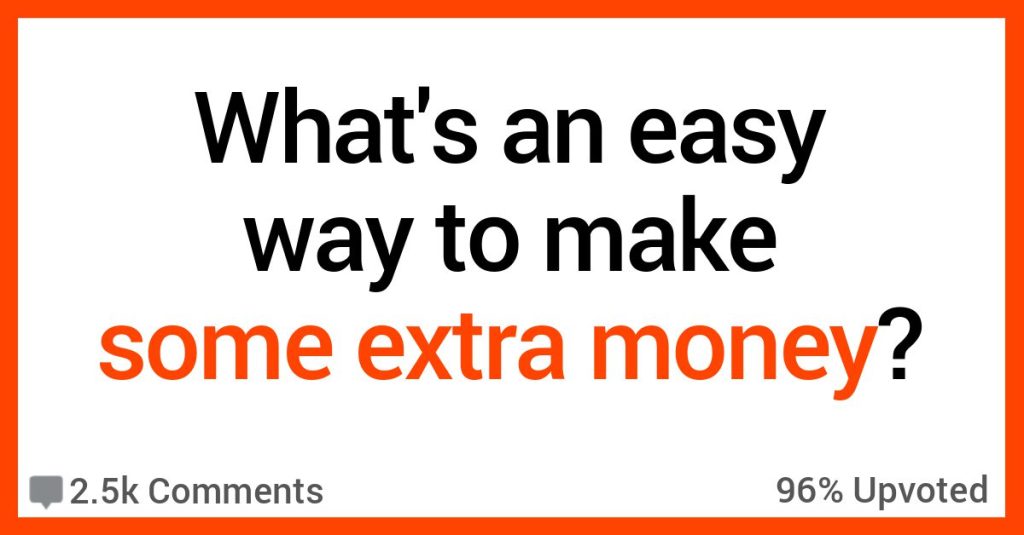 Most of us are looking for ways to make some extra cash these days (or any day, honestly), but it can be hard to think of ways to bring in some money without forking over a ton of money and time to get there.

These people have some pretty great suggestions that you might not have heard of before, so give them a look!

Be at the top of the pyramid in a MLM, and when you get enough money disappear without leaving any traces.

And don’t forget to use a fake European name life Stefan, or Joerg and say you are Swedish.

Not necessarily really easy, but I’ve done well for myself by being willing to work off hours in jobs that do not expect me to keep busy during downtimes.

Can be stressful when it is busy since you are the only one there, but that is also great for building relationships. People will go to bat for you if you saved someone’s a** at midnight when their computer crashed or whatever.

A lot of people can’t help needing to work regular hours but if you don’t, you can write your own ticket in some industries. My supervisor is more stressed that a mistake is going to make me quit than I am it will get me fired since my shift is hard to fill.

Just baking bread. Find a good enough recipe, and people will beg you for it. Almost like a different thing. I mean, I did give them the first few loaves free.

4. They make it sound so simple.

Literally ask for a raise. so many people dont because of pride or fear, and they’re seriously missing out.

Save money by getting your food for free.

The elites don’t want you to know this but the ducks at the park are free. You can take them home.

Small stuff but recycling cans/plastic bottles is 10 cents for one where I live.

I make about $20/month doing it; not much but still ok.

When you want to buy something nonessential, sit with it for a week or two.

Not sure about “getting” money but you can use coupons and codes to save money on purchases.

Don’t pay full retail on something unless you need to. Make your money go farther.

9. This is actually a thing.

Selling pictures of your feet to strangers.

I’m so glad you asked.

Honey, the free browser extension that searches the entire web to find you coupons so you can save as much money as possible.

Medical experiments are EASY money. Look for final round ones that have already been tested on humans. You probably don’t wanna be first cab off the rank with some of these…

Hell I saw one a while back for $1k for testing combined nurofen and panadol.

I got $4k for a wound hearing one. Left some fun little scars on my legs but after tax got a nice laptop out of it. No overnights.

Ones with extended overnight periods pay more but they also feed you.

You’ll have to be a non smoker and have no detectable drugs in your system.

Websites like usertesting.com have panels of millions of average people for companies to test their software on.

It pays something like $20 for a 10-15 minute usability session.

As long as you give it your best shot and provide quality feedback, it doesn’t matter if you’re tech savvy. It’s all on your own too, not live sessions.

There are some different work at home jobs you can get.

Transcription for one. You get an audiophile and transcribe it into text, sort out who is saying what and when in the system they provide you with and get paid around 75$ for every 30 minutes transcribed.

If you have low morals there are chat operator work. You work on a platform, writing to old men from fake female profiles and they pay 1.5€ per message they send, you receive anything from 0,10-0,20€ per message you send. This is actually a big market with sophisticated systems, but highly immoral of course.

The men agree to it by agreeing to the sites rules yada yada, so the info about the girls being fake is printed and usually pretty easy to find in the agreement but they just don’t read it.

If you write fast and have a dirty mind you can easily produce 100 messages an hour.

Not very nice to the old men though.

14. Good advice if you live on the coasts.

Being an extra on TV shows.

Everyone acts as if this is some secret hard thing to do, but anyone can do it. Hell, some shows find extras via Facebook pages.

You show up, you film for a couple hours and you get 100 bucks for hanging out with people plus free meals.

However, don’t do high budget ones. Learned the hard way Amazon has money and they aren’t afraid to use it to keep you on set with insane overtime, which is good for money but you’re gonna end up with long days.

How has nobody said donating plasma? $60-$100 a week (AT LEAST) for donating twice a week, plus there are usually promotions. Right now at my local one new clients can make $700 the first month by donating 8 times. The 8 sessions would on average here take about 10 hours.

Takes 2-3 hours your first time depending on how busy your local center is (as you have to meet with the doctor and get a physical), and after that it takes like 50 minutes each session plus wait time (again depends on your local center but usually 15-45 minutes)

Obviously people can abuse this since the majority doesn’t require proof, but it is pretty crazy how many class actions affect the majority of the general public.

Bought Roundup in the last 5 years? Get some money here.

Bought 2 Towns Cider in the last 4 years? Get some money here.

Be sure to read the rules.

Taking advantage of an employer match on a retirement plan.

19. I’ve never even thought about it.

Oh!! I have a ton of photos, mostly from vacations, that I post to Pixabay. Also some digital vectors that I made while learning illustrator. They can be downloaded for free, but people have the option to donate. I make about $40/month from an account I haven’t updated in at least 2 years.

most of that is paid in euros or British pounds, but also USD as well. It’s hooked up to my PayPal so I can convert the currencies easily to CAD. My most popular photographs are of the northern lights, and marijuana leaves, and rattlesnakes. Using reverse image searches, I have found them on Icelandic tourism webpages, book covers (lots of these!), mousepads, blog articles, and as YouTube backgrounds. It’s kind of cool.

If you’re into graphic design, websites like Redbubble. A good thing about the website is that they don’t close your account due to inactivity so if your designs were a hit then it’s like you’re just taking in free money every month.

I have a friend who did work as a Standardized Patient. Basically, you get money so that medical students can examine you as practice for when they go do medical stuff for real. It’s not much, but it’s honest work.

If you’re reading this, you probably live in a country where selling your kidney is illegal — but as far as it goes in the medical field, everybody already knows about selling parts of your body (especially plasma, in the US, which is well-saturated with broke college students and the truly desperate). Being a Standardized Patient isn’t quite as common.

Read more about it on the Johns Hopkins website. It’s not typically a full-time gig, but Johns Hopkins advertises $20 an hour for literally just pretending to be sick / injured. Rates may vary; check with your nearby medical schools.

When you go to Whole Foods, load up your bowl in the buffet area, sit down and eat it, then go and check out and say you had one buffet. They’ll be so confused that they’ll just ask you to leave.

Life modeling for art classes. Ridiculously easy money and they sometimes have clothed sessions as well as nude.

You get paid, you get tea and biscuits, you get complimented on your body, and you get some cool art done of yourself.

In Australia it’s definitely working in the construction industry like some shifts you work can be up to $100 and hour for 12 hours. It’s hard but it brings in the cash

25. Just be smart with your money.

Sometimes it’s as simple as not spending the money you have. My friend is a veteran, and apparently Target is doing 10% off for veterans. His wife is super excited about this and wants to go to Target.

Selling myself and saving lives. It feels good getting cash for selling my juices.

27. You have to be prepared to call their bluff.

Call up your cell phone, internet, cable, whatever company.

28. Don’t turn yourself into a lab rat, though.

Just look up free studies, there’s bound to be a couple results. Sometimes universities will pay you do things like answer questions.

The one I did was a zoom of the person asking me questions about my perceptions of some gender based game. I got a $25 Amazon gift card for about 30 to 45 minutes of my time.

Fiverr.com — like reading? People need beta readers and will pay you ~80bucks to read their (probably sh%tty) novel and write up your feedback. Good at proofreading / editing? That’s more.

That’s a small slice of the things you can advertise / do there (music, programming, graphic design, etc etc), but freelance work isn’t always hard or even hard to find.

By rotating purchases depending on bonus categories by card, I get thousands of dollars in free money a year for things I need to purchase anyhow.

As long as you pay your balances off in full every month it’s literally free money.

Some years back, an acquaintance of mine got out of significant credit card debt with dumpster diving.

They hit places like Staples and Best buy, would get last year’s SAT prep software/antivirus/tax prep when the new stuff came out… sell it on ebay.

Eventually staples started locking their dumpster, but by that time they’d moved on to rich neighborhoods, where people would just throw out nice furniture or filing cabinets or one time a nice computer that just had a bad power supply.

My brother has done it for profit and food (he’s fine, he was fine at the time, long story) — you return an expensive specialty pillow to walmart, they can’t resell it for hygienic reasons, it ends up in the dumpster, he grabs it, he sells it on craigslist. Dented space heater, same thing. New-look boxes of cereal come out, old boxes end up in the trash, breakfast for weeks.

I could definitely use the money, so might have to look into these!

Do you have something you could add to this list? Tell us what it is in the comments!