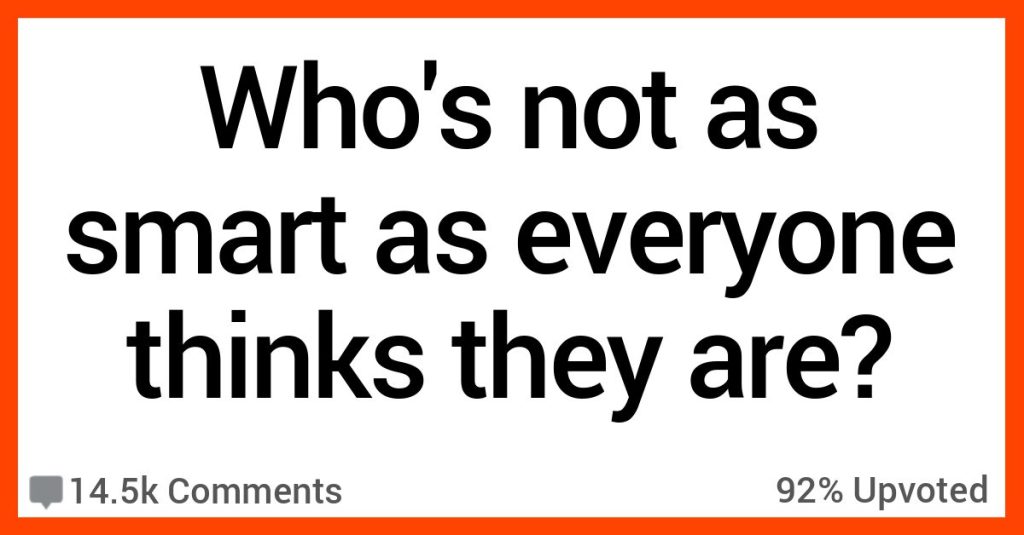 Way longer than the opposite, which would be people who are totally smart even though we think that they’re not.

That said, it could be pretty interesting to read and find out if a, we agree on who people think are smart and b, whether or not they’re smart at all.

These folks have some pretty interesting nominations, so check them out and see what you think!

People who can solve Rubik’s cubes.

We’re not smart, we just want people to think we are.

People think I’m so smart when I just memorized a process off of a YouTube video. It remains surprisingly hard to convince them otherwise though, since said process is somewhat complicated.

Kanye West is neither as smart or as dumb as people think.

The neighbor’s child my mother keeps comparing me to.

David? Alison’s son? Oh he is a darling boy, you know he’s captain of the Football team and tutors blind children for college credit right? Always helps his Mom with groceries.

You know you are just as smart as him, if you applied yourself and stopped playing those Halo of Duty games, you could do that.

Me. I can’t believe the schools, career positions, and opportunities I’ve gotten just because i am very confident, well spoken, and can crush an interview.

Just because i have a large vocabulary and use “big” words, people constantly waayyy over estimate my actual intelligence. I could be the literal poster child for “fake it til ya make it”

When I was a boy of 14, my father was so ignorant I could hardly stand to have the old man around. But when I got to be 21, I was astonished at how much the old man had learned in seven years. -Mark Twain

People who upload small Video Fragments of themselves on Youtube with a extremly simple message ala “You need to be wearing pants to a Job interview” with heroic movie music in the background.

All under the title “life changing, get the job of your Dreams”.

8. It’s all about the parents.

‘Gifted or Smart kids’ I used to be one of these and as things get more challenging, there’s just more pressure from peers and parents.

I remember we did one of those “what do you want to be when you grow up?” kind of projects in like 3rd or 4th grade. I said a chemist. Of course, every kid picks whatever lofty goal sounds cool in their head, and I obviously had no idea what really goes into that or what they actually do in the day-to-day, but my dad latched on to that idea for years.

But, as it turns out, I hate school. It would have been a waste of money for me to go to college where I was at in my teens and 20s. No way I could have handled the pressure. Yet so many people take it as this big insult that I prefer to live a more average, lower-stress lifestyle than some advanced technical job just because I have a good memory and decent reasoning skills.

Being “smart” doesn’t really mean anything on its own in life. Do what makes you happy. Live free. Be an idiot if you want. All that matters in the end is that you’re satisfied.

It’s so funny that my mom is the “advice sage” amongst her friends, and she’ll spend hours on the phone with someone detailing how they can get their lives together and succeed.

Meanwhile, her life is falling apart and she’s more concerned about advising other people’s lives than fixing her own.

I’ve since moved out, and this behavior has only gotten worse.

I had an absolutely brilliant roommate in college who was there on a full scholarship and always aced his classes.

However, he was a complete ditz when it came to “real life.”

You’d walk out and find a half-made sandwich with all the condiment containers and lunch meat packages around it. The kid was just long gone because something popped into his mind and he completely forgot about his lunch. Or something similar.

Stock Traders or other Investors.

Exactly. Sal the Stockbroker from the Howard Stern Show. I can’t believe he managed people’s money at one time.

12. No one can be good at everything.

Programmers. I am a programmer and i spend 10 hours on a misspelled word.

Any television doctor, but a special shout out to Dr. Oz – who peddles homeopathic bulls*%t weight loss medicine that is legit dangerous for people.

Literally everybody is stupid in some way, because we can’t simultaneously be generalists and experts.

We can either divide our time equally into all lifes various subjects and be a generalist, or we can focus a lot of our time on a small amount of things and become experts.

I remember he had a particularly messed up guest. She was introducing herself and her whole litany of challenges; at the end, she meekly said, “I might be the hardest client you’ve had,” with a nervous chuckle. She was clearly trying to lighten the mood.

Dr Phil proceeded to lay into her. Yelled at her like, “I AM AN EXPERIENCED PSYCHOLOGIST I’VE DEALT WITH WORSE THAN YOU! GET OFF YOUR HIGH HORSE!!!!”

And then he just lays into each of her problems with zero empathy. Like Freud on steroids.

I’m pretty messed up myself at times due to childhood abuse and when I saw a new therapist, I kind of said the same thing. It’s just a nervous response to being put open on the table like that.

Parents – you grow up thinking they have it all figured out and know everything. Then you become one and you realize that it’s all a facade you put on for your kids so they feel safe and secure.

And there is something wholesome about that.

She loves to flaunt she’s a neuroscientist but hasn’t done any research in years. And she’s out there hocking a useless supplement called Prevagen that’s literal garbage.

Plus she went down an anti-vax wormhole for years.

She’s out of it now, but that was weird. For someone who says she had a background in science, she seemed to reject any scientific objectivity to vaccines.

Engineers. I am one, I work with a lot of them, most are some of the most inept humans I’ve ever had the misfortune to know.

My dad is an engineer and the thing that I say about him is “he is the smartest man I know but he’s so dumb”.

He is so smart yet he also accidentally drank laundry detergent.

Engineers are a certain breed of people for sure.

I feel like most YouTubers that people worship aren’t smart, just smarter than their viewers which isn’t saying much.

They have their followers and tell them what they want to hear.

That’s their bottom line and it’s a business.

Wonder when people will start to catch on.

People always overestimate their own intelligence and it’s annoying!

He did build the restaurant from the ground up and is always getting over on plankton.

While he’s an expert in his field, he has a tendency to over-extend himself and comment on areas in which he is not an expert.

Over a decade ago, I saw him speak at my college, and I was stunned at how many things he said that were factually inaccurate. Being an astrophysicist does not make you an expert in, say, biology, and he said several things that were wrong or misinformed. And he said them with total confidence.

I don’t remember the specifics, but I went there as a young biology major and I remember the next day in my embryology class, everyone was like, “Hey, why did Neil Degrasse Tyson say a bunch of blatantly wrong stuff about biology and evolution? Did we misinterpret it somehow or did he just seem to not know what the hell he was talking about?”

In years since, he’s said things on Twitter that were later disproven, and he never seems to have the humility to say, “That’s outside my field of expertise and I can’t comment on it, let me refer to another expert.”

Part of being smart is knowing that you don’t know everything, and I find Neil Degrasse Tyson to be insufferably arrogant.

He didn’t really do much besides just tell smart people to bring his ideas to fruition.

I can’t remember which comedian does a bit on it but its spot on.

He also never showered and died prematurely because he thought fruit could cure cancer.

My middle school teachers. I grew to find them on social media sharing fake news, conspiracy theories, and religious and political memes laced with typos.

It was a rude awakening.

There is a book called The Everything Store. He tells this story about when they first started Amazon in a garage.

“I didn’t have packing tables,”. “I said to one of the software engineers who was packing alongside me, ‘You know what we should do? We should get knee pads.’ And he looked at me like I was the dumbest guy he had ever seen in his life, and he said ‘Jeff, we should get packing tables.'”

He was successful pre Amazon and even when they were a billion dollar company, he knew the chance of failure was still high, this is something a lot of entrepreneurs ignore. Everyone has flaws, he’s very aware of his.

Criminal Masterminds are not as smart as many people think. Majority of the hardcore criminals did one stupid thing that got them caught.

Timothy Mcveigh, drove without a license plate after the Oklahoma city bombing, and admitted that he had a loaded gun, and was arrested for that, and that’s how Timothy Mcveigh was caught.

One of the 1993 wtc attackers, Mohammed Salameh, rented a truck using his own name, and tried to get a $400 deposit back after claiming that his truck was stolen(Being too much of a cheapskate lol), but the Fbi had found the axle of the truck after the bombing, and it was registered in Mohammeds name. When Mohammed went to the Ryder store to get the deposit, the denied him and he was arrested on the spot.

Shoe Bomber Richard Reid failed to ignite his shoe, because of perspiration and sweat from wearing it for so long.

Times square bomber Fasial Shazhad, incorrectly wired the bomb, so instead of exploding, it didn’t explode but instead smoke came out of it. He almost got away, but the FBI found his getaway car with a loaded weapon in it, and the car registered to him, and the flight had to taxi back to the gate and he was arrested.

Albert Bailey, called a bank ahead of time to demand 100k. Was arrested the next day.

Ted Bundy was pulled over for erratic driving, and police found out that the car was stolen, and was arrested and then they found out that he was the one killing women.

One man tried to carjack someone, but couldn’t drive stick shift.

Criminals are some of the dumbest people alive.

Most celebrities since they have the Halo bias going for them.

I feel like he should be the mascot for the “iamverysmart” subreddit.

She’s wrong about almost everything and everyone.

I mean, some of these are no-brainers. Others really made me think, though.

Who would you nominate to this list? Drop your names in the comments!