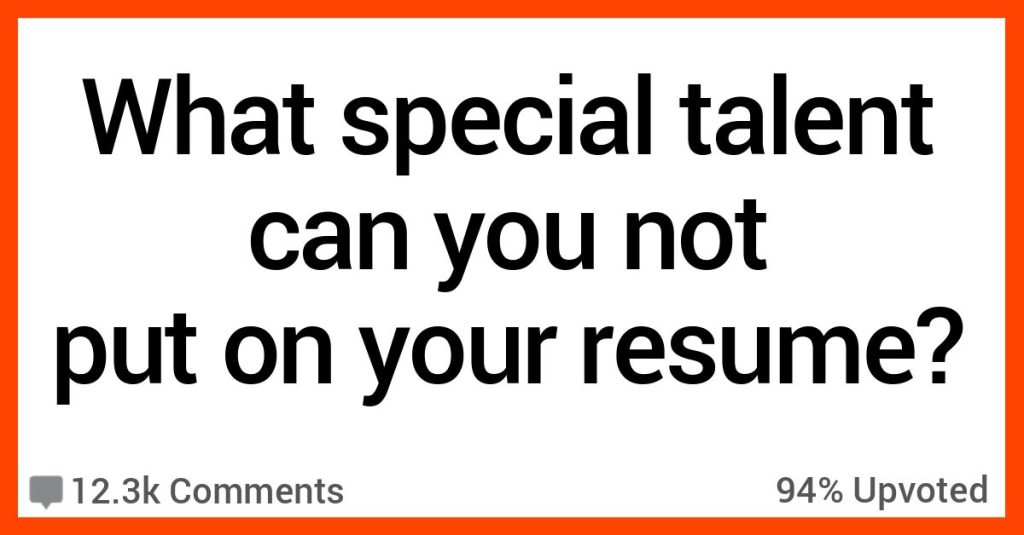 All of us have our special talents. The little things we’re good at, that make us feel good about ourselves or are fun to trot out at parties, but you know.

They’re not exactly going to land us that dream job or our next big promotion, you know?

These 17 people do, and they’re sharing those obscure but amazing talents with all of us.

1. I’m sure this would impress some people.

Wrote and ran a D&D campaign with a group of friends for about 3 years. We met every week, only missing a few sessions if people were too busy or sick or something. It was some of the most fun we ever had

We started at level 3, and ended at level 20 with a TPK. It was glorious. The best part was that the end of the campaign involved the party going back in time to stop an evil pantheon of gods from destroying another pantheon and causing the world to plunge into ruin.

So their deaths ultimately ensured that the timeline was maintained, thus preventing any paradoxes.

2. The reward is in your heart.

It could sound stupid, but I saved a lot of stray animals. Not only saved, but also found them safe homes and loving families as well. Doing it on my own, not as part of organisation or shelter.

It takes a lot of nerves, time, money…and a lot of tears, because some of them I find a little too late..

But at the end, knowing that some innocent souls got a better life thanks to me, is the best reward possible, although it’s not something to be put in a resume.

3. So you have to eat that second slice of pie, for your instrument!

I can play drums on my belly.

I am proud of myself.. but no idea how to put that on my resume though.

5. Depends on where you’re interviewing, I guess.

I was a meth addict for ten years and stopped cold-turkey because I hated the person I had become. One month later my dad was killed and eventhough my brain screamed for me to stop the heartache with dope, I didn’t and I have been clean for almost 11 years.

I am now almost done with graduate school and I would never put this on my CV or resume, but everyday I am proud of myself and what I have accomplished.

Update: I also wanted to say to anyone out there struggling with addiction; I know life seems overwhelming and horrible and it doesn’t seem like you can escape. You can it will be difficult, but I promise you that a difficult life clean is much better. Keep trying and keep your head up. You can do it I believe in you.

That i successfully made a souffle at 13.

Probably something common with a lot of people, but i learned how to speak / read / spell english only by playing video games since i was a kid.

Never had any classes or anything.

Even if it’s a kind of “Informal English” , i still think it’s a pretty good and self rewarding accomplishment…

Saved a drunk woman from choking on her own vomit.

Survived meningococcal meningitis at 18. They told my poor mother it was up to me whether I made it through the night.

Got through a mental breakdown at 30.

Proud to be a fighter.

I once killed two ogres with one cantrip. Minor Illusion is really good if you use it right.

13. Everyone is better off.

Working evenings and weekends, I turned the dumping area behind my school into a outdoor classroom, nature area and thriving pond.

I’ve lost a good bit of weight recently and now my d*ck is visibly bigger.

I keep catching sight of it in the mirror as I pass and then realising that it’s mine.

I have no refractory period.

I had a baby at 17, left home to give her a better future then my moms drunken, high life.

She turned 18 a few months ago, is going to university and graduated high school with honors.

She doesn’t smoke, or drink, or do drugs!! I did that changed my families legacy

17. This is actually a huge accomplishment.

Surviving five years of prison without a single incident report.

I can blow bubbles off the tip of my tongue using my own saliva.

19. That deserves a fist bump.

I kicked a serious methamphetamine habit with willpower alone.

Stopped a major international incident when I was in Iraq with the Army as a private.

Our unit was charged with security of a couple of towns, and went weekly to meet with the Mayor and the Iraqi Army. Usually it was attended by our Captain, with about 2 platoons worth of guys (about 20 people total). The Captain was out of country for his leave, but we’d had no problems with the meetings, so he sent a brand new Lieutenant to get some experience in dealing with the Iraqis.

At the meeting, the Mayor begins complaining because the citizens had protested him over the weekend for being corrupt (he was), and taking money that was meant for them (he was). He said he told the Iraqi Army Captain to shoot the protestors, but the Captain refused. Our Lieutenant, who almost certainly couldn’t understand our interpreter because of his very thick accent, just nodded his head and said he agreed with the Mayor.

This was of course a huge insult to the Iraqi Army Captain, who turned incredibly red and began making furtive orders to his men, some of who began casually getting up and shifting their positions in the room. The Lieutenant was oblivious to everything, and had no clue what was going on.

I knew what was about to go down, so I got on the radio and ordered all of our SAW gunners (soldiers with machine guns) to get off the trucks and take up positions through the building immediately. I also ordered our guys who had been standing outside the meeting room to come in, and ordered the gunners in the trucks to be up and ready. The Iraqi Army Captain heard me on the radio, saw the guys come in, and stared at me. I just shook my head no, and he seemed to realize it wasn’t going to go down the way he wanted.

After the meeting wrapped, I snatched the interpreter, got 2 SAW gunners and a grenadier, and followed the Iraqi Army Captain to his office. I’d met with him several times before, so he knew me a little bit. I told him essentially that our Lieutenant was new, had no clue what he was doing, and that we were very grateful that he didn’t shoot citizens because they were protesting. He calmed down immediately and said he was sorry and just got mad that he had been insulted in front of the Mayor. I told him it was water under the bridge, but to never ever try that again. He said he wouldn’t, and that he was embarrassed he’d taken the actions he did. We drank some tea, shot the shit for a couple of minutes, and left. Every meeting after that went smoothly.

So yeah, we could have gotten into a shootout inside an Iraqi Army base, which would have killed one of their officers and a bunch of their men, plus the Mayor, as well as a whole bunch of our guys.

My experience as a black belt in Shito-Ryu. It’s a traditional Japanese style martial art.

In 2005, I was ranked 11th in the world in my age division, a three time National champion, a Junior Olympic champion, and invited to join the US International team (equivalent to the US Olympic team in other sports).

I’m an Electrical Engineer, so it doesn’t really apply to my resume and it was also fifteen years ago, but it’s my proudest accomplishment.

22. Depends on your family, I suppose.

I come from a family of cons, so it’s not a small thing.

And for the most part, I have little interest in drugs.

Tried shrooms a few times for my migraines and I love an occasional beer, but the addiction gene may have skipped me.

23. Way to advocate for yourself, dear.

At the age of 15, two years ago, I was denied approval on a Single Case Agreement for mental health treatment coverage by my insurance, and wrote a letter of appeal entirely by myself, which I then mailed with my parents help.

Shortly after, they overturned their decision and approved 100% coverage for my treatment, and told me that my letter was the primary reason they changed their minds.

25. The world could use more of that.

I pick up a lot of trash and i’m pretty good at convincing others to help me.

Not trash, but my grandfather had a cabin on Lake Michigan.

Every time my father and his family went up, they started the evening picking sticks up off the beach, so frequently that my father would get excited to do it.

How did my grandfather convince his son this was meaningful work? But calling the job-title “collecting debris.”

Added a whole new twist on picking up sticks.

I was hospitalized for suicidal ideation 4 years ago and had to basically start my life over due to choices before then.

I just got pre approved for a mortgage today.

I overcame a 5 year long drug addiction no one knew I had.

Had an accountant’s resume which highlighted his experience as a professional clown.

Tried to help him by changing the title but nope.

6km swim without a break.

32. Yeah you can’t brag about that in an interview.

I once made a three stage glass bong with percolators and a cooling chamber out of glass. I used 99 peaches bottles that I cut by scoring with a glass drill bit and dunked in boiling water then ice cold water to get a clean break and sever the bottom to stack them.

The stem was a glass tube/funnel combination courtesy of the chem lab. I Epoxy’d it together and it truly was an engineering marvel.

I can put both feet behind my head, and I can almost always predict what marriages are going to last.

What’s the talent that you just couldn’t share with potential employers? Tell us in the comments!