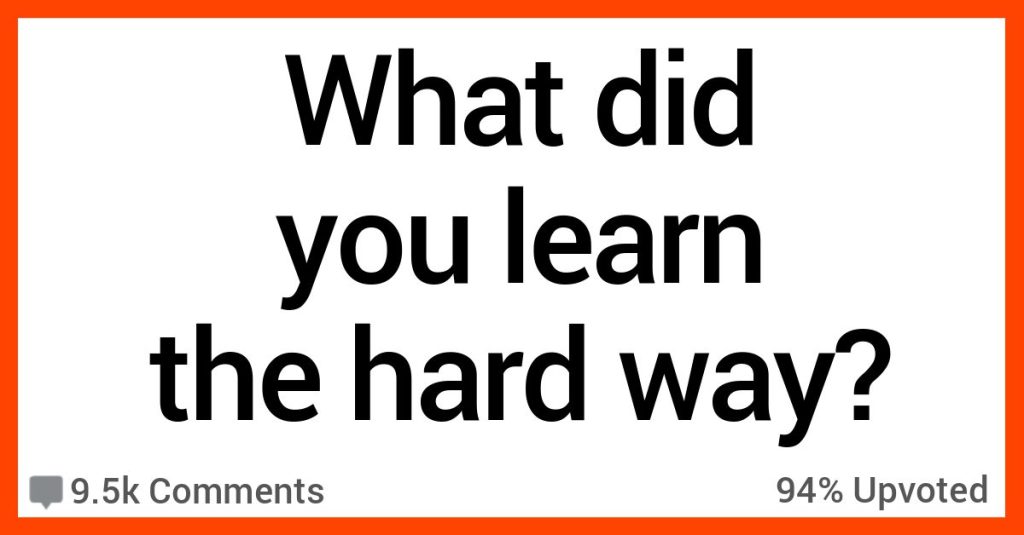 Been there, done that, right…?

We want to believe we know better, but these people are here to say there are times they sure wish they had been willing to listen instead of insisting on experiencing everything for themselves.

Always keep your mouth closed when cleaning the toilet with the toilet brush.

Wear a mask. Closing your mouth won’t stop toilet juice from splashing on your lips.

Stress impacts not only your mental health, but your physical health too.

Every time finals week rolls around the acne flares up, back pain gets bad, and my bowels go crazy.

3. You never know until it happens to you.

Sometimes you can’t fight back when someone harms you, nor scream or even move. Apparently, freezing is very common and it f**king sucks.

never thought i’d freeze if something were to ever happen to me until it did. it took me a long time to forgive myself for freezing.

4. Don’t feel guilty about it, either.

Set your boundaries early and clearly.

Just because someone hasn’t broken up with you, or clings to the relationship, doesn’t mean they really want to be with you. Sometimes you have to break your own heart to get out of an unpleasant situation.

I feel like some people can want to not hurt your feelings. But by doing so they just make it worse because they can’t be honest and say they aren’t happy.

Never combine bleach and ammonia, sure everyone knows that.

But as a kid, I just made a mental note to not combine flasks labeled “bleach” and “ammonia” when hanging out in a lab.

Skip to young adult years: I’m working in a vet clinic and what do I spray in to a litter box with tom cat p**s in it? Well it was extra stinky so I skipped the chlorohex and went for the bleach spray of course! I was also in a tiny little room with a tub but no ventilation.

It was like breathing in gas that ignited in my throat. Lesson learned.

7. It will change things.

Money doesn’t mix with friends or family. Never give someone money that you aren’t willing to burn.

Okay, maybe it can mix, but don’t make it a loan, make it a gift.

If the other person seems hesitant at the idea of a gift rather than a loan, say, “I know you would do the same thing for me.”

Not everyone has family or even parents who love them. People always assume everyone does.

Sending virtual hugs to everyone who knows the pain of being without loving parents Since I can’t say everything I want to say, I’ll just say this: PLEASE please deal with the trauma of this issue. It’s hard and it stays with you forever but it can be dealt with.

A book I highly recommend is COMPLEX-PTSD by PETE WALKER. Get it now. It’s amazing, insightful, and is helping me heal myself slowly. If you are struggling I think it will be a wonderful read! **Remember that even though is not an excuse or a justification, our “parents” were once children who were probably hurt as well. “Hurt people, hurt people.”

Let’s all be better than them and not carry on abusive cycles. Hope everyone is having a great day!!

Being lonely can make you think and act in ways that will only perpetuate the problem, if not make it worse.

Be friendly and open, don’t expect people to approach you but don’t come on strong or expect relationships to build and solidify quickly, let people get to know you in their own time.

The best way to stop being lonely is to act like someone who isn’t lonely.

This is the real fake-it-til-you-make-it. Sadly, nothing is a bigger social repellant than loneliness. People don’t want to take on your emotional baggage when they barely know you. And people don’t want to feel like they are interesting to you purely based on the fact that they are better than nothing. So you need to get out there and meet people, but as if you already have a basically completely full life and are willing to make some space for them. And when people are friendly to you and make overtures, say yes, but don’t overdo it. These overtures likely mean they are somewhat interested in getting to know you better, not in interviewing you to immediately to be their new best friend or love of their life. Remind yourself to take things slow.

Join a writing workshop, take a language class, learn how to throw a pot, learn how to tap dance. If you have time be lonely, you likely have a lot of time on your hands, use it! Activities doing what you love are good for the soul, keep you busy and with a full life, and you will meet people with common interests this way. It also makes you way more interesting when you meet other new people.

Initiate plans with the friends you already have.

Don’t feel bad about always being the initiator with people. Most people are pretty self-centered and kind of glide through life reacting to stuff, rather than being “pro-active.” When your friends don’t call you, it’s not because they don’t care, it’s likely because they aren’t thinking as far ahead as you are, and aren’t thinking about that much other than themselves or maybe their immediate nuclear family. And don’t look down on being the initiator, it’s a great characteristic to have and develop.

Initiators are why relationships last. Also, having plans with existing friends makes it easier to make new ones because inviting new people along is flattering to them and takes the pressure off the social interaction.

“It’s not what you know, it’s who you know” is not just a trite saying.

Very much this. If you have no solid connections, you’re not necessarily totally screwed but at a severe disadvantage.

Hypothermia really isn’t a bad way to go. I tipped a canoe in Northern Minnesota during late spring, and spent 45 minutes in 40° water.

After a while, you stop feeling cold. The shivering and terror are replaced by a nice, warm, peaceful calm.

I managed to get to shore and pull myself out of the water, but that was all the strength I had.

Miraculously, my screams for help were heard from over half a mile away. When I heard the boat, I could barely lift my arm to show them where I was. It was 80°F and sunny, but I was lying there dying.

The term “fireproof” is always relative. Nothing tragic or anything, let’s just say if you’re getting into metalwork don’t cheap out on your ppe.

Aluminum will run like water, and just like water if it pours on you it will find all the gaps and holes in your clothes. Luckily it’s so hot that it doesn’t hurt until it starts to heal.

13. Relationships are complicated. But not really.

You cannot love someone into loving you.

Likewise, your jealousy won’t keep someone from cheating if they really want to.

When you get hungry, sometimes you’re not actually hungry.

Our brains don’t know the difference between thirst and hunger so many of the times you get thirsty your brain will send signs of hunger when you actually just need some water.

Never co-sign for a friend.

I’ve co-signed for two things in my life: one for a friend and one for my dad. I had to pay for both in the end.

If they can’t decide if they want to date you or someone else, take yourself out of the equation.

Disclosing any mental health issues to your employer can and will be used against you.

I hope everyone that’s replied who’s had or having issues with their employer finds somewhere they’re safe and accepted.

It’s illegal to ship food from Australia to South Korea. Thankfully the post office worker made sure to check what I was shipping, or I could have ended up in serious trouble.

Fun fact: You are also not allowed to keep non-native invert/reptile species in Australia and NZ. Which is extremely fun, Australian native species tend to be much more spicy (read much more venomous) than other species around the world.

Want a ‚beginner‘ species that won‘t send you to the hospital with a bite/sting in Australia? Good luck.

Having a kid with special needs requires a very patient and prepared parent. My brother has special needs and my parents have been worn down because of it. They are both borderline alcoholics partly due to the stress involved of it and many arguments are created because of parenting disagreements.

Basically it can really complicate family dynamics. I tend to keep to myself to avoid the arguing and constant conflict.

note: I love my brother and I am not trying to sound insensitive here. Just trying to shed some light on a perspective not touched on often.

21. This goes for pretty much everything.

Ever gotten headbutt in the thigh by a goat? It’s all fun in games when you are “wrestling” until it pulls one of those on you hahaha

That even the worst food does not taste like s**t.

I grew up on a farm. There are a lot of instances one can find out what s**t tastes like in that context, and because it’s the internet, I need to note that all of those instances are purely by accident in my experience.

I don’t judge what someone else wants to eat, but in my life, this has not been intentional. LMAO

You can do everything right and still not make some people happy; only almost happy.

It’s designed like a dangling carrot juuuust outside of your reach. With just one more push, you may be able to grasp it, but you won’t because it’s impossible.

If you stop trying to grab the carrot, you will upset them. That’s a price worth paying.

24. This one comes for everyone eventually.

I am not as smart as I thought I was as a teenager.

The older I get, the smarter I used to be.

25. Not everyone can be pleased.

I work i heating and cooling sector. Best you can get is 95% of people happy. 5% will always complain (too hot or too cold).

To be fair, with that mindset you might want to join the porridge industry. Only having 5% too hot/too cold is exceptional, usually only 1/3 are just right.

Never assume u have lot of time.

27. Believe people when they tell you who they are.

Don’t make excuses for someone else, or forgive them repeatedly, people are perfectly aware of what they are doing, and by forgiving them you let them take advantage of you.

28. Know what you’re dealing with.

It doesn’t matter how much you give to a narcissist; they’ll always expect more.

Holding on to anger only poisons you.

When you’re hurt and backed into a corner suddenly everyone becomes an enemy.

30. I definitely don’t want to learn this firsthand.

Falling into an ice fishing hole is very cold.

31. You can’t make other people do anything.

Never make someone your “everything.”

Because when they leave, you’ll have nothing.

I think everyone older than 25 has a list of these things, right?

What’s on yours? Tell us about it in the comments!