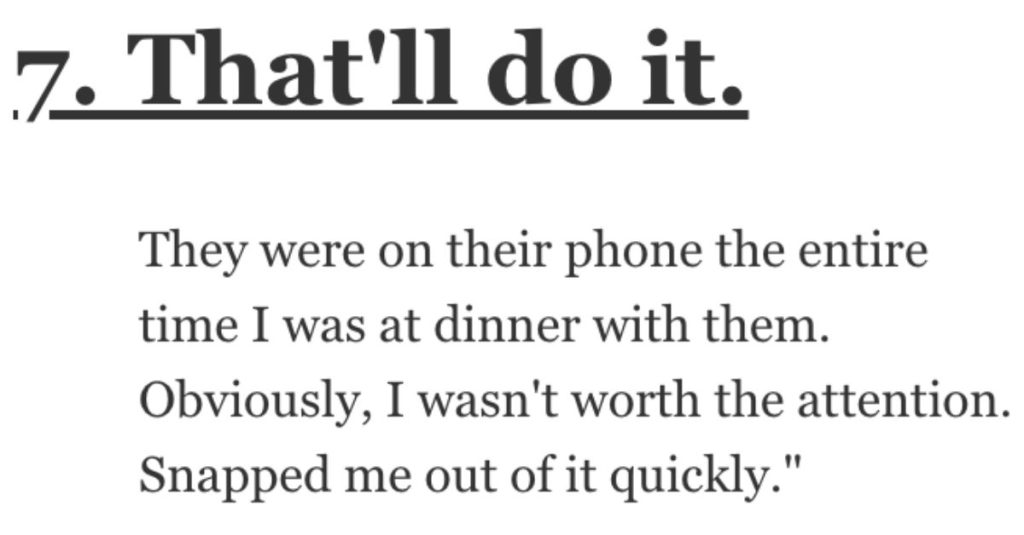 33 People Admit How They Instantly Lost Interest in Their Crushes

Finding people you like to begin with is really hard, and those first days and weeks, when no one is super invested, are always tricky.

One little thing can be enough to tip the scales in your favor – or not – and these people found they just couldn’t go on after the rose-colored glasses came off.

Talked sh%t about their children.

I’m not a kid person, but hearing a dad say his kid sucked, really made me disinterested quick.

Actually threw a plastic chair at someone.

I couldn’t stand for that.

Told me verbatim “our genetics are optimal for mating.”

He told me he got fired from his job for reasons that were 100% his fault, then bragged about leaving fake bad reviews on the company’s website.

He was also 3 years older than me. I just saw this as really immature, petty and lame.

Stopped talking to him after that.

Super rude to a waitress.

I have no time for people who can’t respect service industry folks!

They were on their phone the entire time I was at dinner with them.

Obviously, I wasn’t worth the attention.

Snapped me out of it quickly.”

8. This will make you want to murder them a few years in.

Chewing with their mouth open.

Drove way the f*ck too fast with me in the passenger seat begging him to slow down.

For real thought I was about to die.

When he said that I didn’t know what I was talking about, when I said that Autism Spectrum Disorder (ASD) is genetic, not a result of vaccines, and that the “study” that supposedly proved that it was caused by the MMR vaccine had been redacted from the medical journal it was originally published in.

Keep in mind, as someone with an Asperger’s Syndrome diagnosis, I have a high-functioning form of ASD. I had all of my vaccines on time, including the MMR vaccine, and wasn’t diagnosed with Asperger’s until I was nine.

His only “evidence” that ASD is caused by vaccines, is the study that was redacted, and the fact that scientists haven’t been able to pinpoint which genes are affected in people on the spectrum, vs people who aren’t on the spectrum.

Recently had an experience with a woman being racist.

She all but laughed at me for having slept with a black woman.

Which she brought up and asked me about.

One of many red flags I didn’t take seriously enough.

On our second date he made a joke about me giving him a bl**job by the dumpsters at the restaurant we were eating at.

I mean, if it had been by the picnic tables, but the dumpsters?

Crushed bags of chips at the store.

Had been seeing each other for a few months… we’re going to make dinner at my place that night, went to the grocery store to pick up a few things and he randomly starts grabbing bags of chips from the bottom and crushing them.

Tells me him and his kids do this every time they go grocery shopping. Wtf?!

Told me she’d had her rifles confiscated by the police because she had threatened her last boyfriend with them via text.

I mean, I give her points for honesty, but I stopped sticking my d*ck in that crazy.

When I was a teacher, I had a guy say, “I think you’re a teacher because you don’t think you can do anything else.”

Not only insulting and disrespectful to me, but to all teachers who give so much of themselves to their students.

I told him as much and he said I was being too sensitive.

Ex-GF who had a key to my place, mainly so she could let herself into the building. I live in a condo and the building is locked 24×7. Really no reason for her to be at my place when I’m not there, she lives about 20 minutes away. Purely for convenience.

Everything is going well, we like spending time together, the sex is good, just generally a comfortable relationship. We had been dating about 4 months.

I went out of town for 3 days for a business trip. The day after I got back (Thursday) she asked if she could come over after work. I assumed she wanted to spend the night even though we typically just did sleepovers on the weekend.

She went through every single drawer in my condo while I was gone, looking for evidence that I was cheating on her. I wasn’t.

She had some really weak evidence like a birthday card from 4 years ago that a chick gave me and had signed, Love, Stacey. Had 1 condom (expiration date was in 2 months) that she dug out from the bathroom cabinet. Ummm, yeah. I have dated other people in the past and I use condoms. Apparently there was one left that I didn’t know about… it’s almost fucking expired so obviously it’s old AF. A couple of other really picky things that were just ridiculous.

Then I asked her why she looked through my place obviously with a fine tooth comb. Seriously, what is going on? She said she thought I was “distant” sometimes and a couple of times when she called me, it took over an hour for me to call her back. Two of her friends told her I might be seeing someone else….red flag.

I told her that she let her friends screw up a perfectly good thing. Told her I wanted my key back. She tried to justify what she did but I was just done. Told her that I was sorry it had to end this way, but I just didn’t feel comfortable having my space invaded like that especially when she did it while I was out of town and then put me on trial when I wasn’t expecting it at all. Creepy.

She cried a little. Still tried to justify it and finally said she was sorry. I walked over to the door and held it open. She walked out and we haven’t spoken since.

I’m a veterinarian and specialize in surgery. The guy I was seeing said I’m not a “real” doctor and that veterinarians are only after money. Yeah.

When I asked him what he meant he said “you know. The really smart type” ummm. Okay. Fourteen years of advanced training, a graduate degree, and working with human surgeons researching regenerative medicine isn’t smart I guess?

Sent me a snap chat of them on the shi**er.

Then said “what? you dont like my poop selfies?”

I had only matched with them on tinder like 5 days before.

They asked me to take credit for a car accident they caused. I was sitting in the backseat, with another friend of mine, and she turned around to talk to the friend, while putting her foot on the gas; she rear-ended the car in front of her.

I was the only other person in the car with a license and she panicked. She asked me to quickly get in the drivers seat so the woman whose car got hit would think I hit her. I didn’t hate her for it or anything, but something like that really kills feelings.

Spit on the ground at the pool. Ain’t nobody got time to step in swimmer goop.

Told me to get my toes “fixed”. Two toes on each foot are HALF webbed. I like them at think they make me look cool and different without being weird or gross.

I was gonna give the guy a bj after we went swimming but sitting by the pool and hearing his opinion of my toes absolutely killed anything I felt. I just told him to leave & that was the end of it.

Kept squirming his tongue randomly like he was licking something.

Wore a mesh mask at a place where masks were mandatory.

I don’t like masks either but either suck it up or don’t go places where they’re required.

Would drift while I was in the car because he knew it scared me. He also made me feel like a complete idiot all the time.

Different guy: laughed when I told him how I had been stalked in middle school. Instant nope from me. (He, somewhat unsurprisingly, proceeded to stalk me.)

Guy #3: I heard and saw the way he talked to/treated his mom. If he can’t show the woman who birthed him basic respect, I doubted he would have much for me down the road.

I could keep going, but I think that’s enough for now.

One of my ex boyfriends yelled at the waitress because she brought out our food and his entree was touching the side dish on his plate.

I was already thinking about ending things, but that accelerated our breakup and I dumped him that same night.

Said, without knowing it applied to me, that people like me deserved to be rounded up and killed.

First was a guy I dated who was great until I heard him make jokes about disabled people and also say the n-word (he’s very white).

Second was a girl who told me that she and her friends go to restaurants and stores and try to be as loud, annoying, rude, and disruptive as they can until they get kicked out. They apparently literally go to the mall and try to get kicked out of as many stores as possible. I don’t have time for people who needlessly bother and disrespect workers like that.

We talked some politics.

He said, “Trump loves America and pu*sy, so how could I not love him too?”

Went into the work fridge, shook up a random soda can and laughed uncontrollably for a few seconds and said whoops.

This very handsome guy I worked with had slept with someone else we worked with. She wasn’t well liked, so I guess he didn’t want people to know about it, but she told everyone (and showed me texts between them, so I knew she was telling the truth), so he would talk s**t about her constantly. He would say some truly awful things about her and it turned me off of him so bad that i just tried to avoid him.

If you’re gonna sleep with someone you work with, you should be on the same page as far as telling other people. And if you don’t make that clear with the other person, don’t try to cover your a$s by being a disgusting jerk.

in my early 20s, dated a girl for a couple of months. One day we were walking around a mall and I mentioned there was something I liked. A little while later she “presented” me with a present.

It was a silver bracelet (the item I was admiring)… asked her when she bought it and she replied “I didn’t, I stole it”. I looked at her and asked “for real”? She said “yep”, I told her to take it back and that I didn’t want to see her anymore.

Too bad, she was a cute girl.

Found out she had a boyfriend. Gave up because I’m not an a**hole and her bf was my friend.

I’m so glad dating is not my thing anymore.

Now I just have to live with the consequences of my own choices. Easy enough.