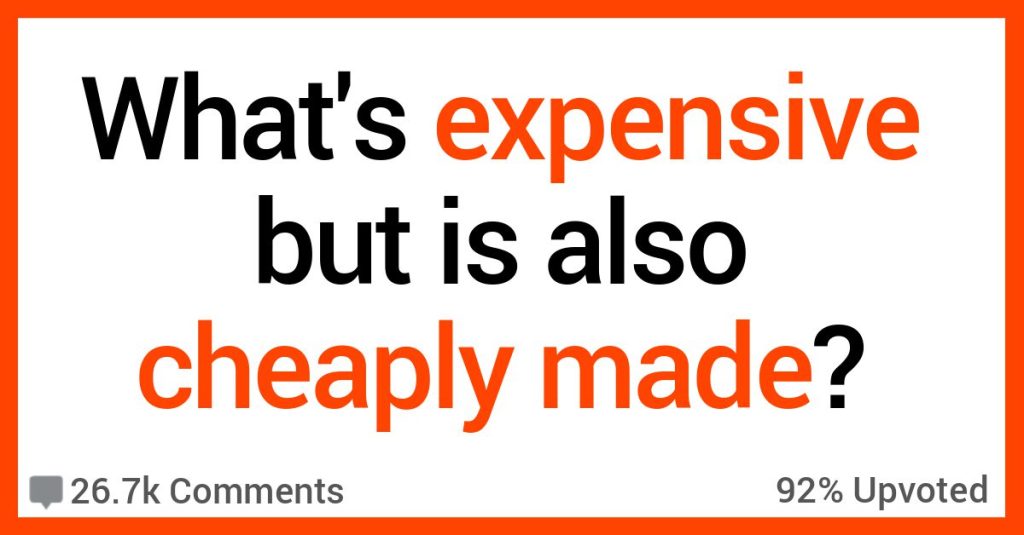 36 People Share That Are Expensive Despite Being Cheaply Made

There are a few ways things can go down when buying and selling products.

You can get a great deal on something that’s expensive to make but sold at a reasonable price (the rarest), you can get something cheap for a cheap price, and it breaks soon after, you can buy something expensive and well-made, and have it for a long while (the second-best option), or you can pay a lot for something that definitely doesn’t deserve the price tag.

If you’re wondering what some good examples are of the latter (so you can avoid them) these Redditors have your back.

1. This is pretty interesting.

When I worked at Vw, we had to constantly order ignition switches because either they are cheaply designed or cheaply made. So when we would place the order from Volkswagen North America, it gets shipped directly from the manufacturer (either Huf or Valeo). And they would include the invoice in the box.

Himalayan Salt – in Pakistan, we get that shit in like 0.20 cents but I’ve heard it being expensive in UK & US.

4. Someone is always looking to make a buck.

I would imagine it doesn’t take much to make 15 of them, and with the virus, they have jacked the price up.

6. We just want to have smooth skin!

They are produced at like 15 cents but are sold for 3$ per blade.

Popcorn at movie theaters is I think the most expensive commodity.

Costs manufacturers pennies to make, and the government makes the biggest cut.

9. You’re paying for the label.

Most luxury brands with huge obvious logos on them.

10. And they’re probably made by children.

Oh, and the 15 hundred dollar ones also cost about 20 bucks to make.

11. All prescription eyedrops are ridiculous.

Glaucoma eyedrops – about $379 for a tiny bottle of the prescription treatment.

There is nothing in it, no money used for clinical trials. Sold for around 7- 10 euros per box.

13. This should be illegal.

It’s criminal how much they charge compared to the manufacturing costs.

We make them often at home here in France. 250g of flour, two eggs some milk, maybe butter, you get 25 crepes for what, 4 euros of groceries. Some street foods in Paris or other big cities will sell them 4 or 5 euros sometimes. And they buy the ingredients in big bulks at cheaper prices so they make an even bigger margin.

They make 100 euros of crêpes for 3 euros of batter and add the toppings, let’s say 7 euros for a pot of nutella, sugar and lemon or whatever. 100 euros for 10 euros. Stonks.

It’s well known by people who work in restaurants in France that crêpes are highly profitable.

Both adopting and buying a baby on the black market takes serious money.

The biggest cost associated with a baby is the ongoing maintenance costs.

If you want a better suggestion , my skullcandy hesh 3’s sound 3x better than my old beats, at only $100. I have a fairly large head, and having the headphones be able to stretch to fit is very important, and these work perfectly for that.

New build houses in the UK!

Built by the lowest bidder, to the lowest standards possible. Crammed in so densely that two “detached” houses can be less than 18 inches apart.

The biggest scam is that the developers try to sell the house, but retain ownership of the land that it’s built on, then charge rent for the land.

Nestle is f**king soulless. They have argued that clean water is not a human right.

I’ll never forget learning that the movie theater I worked at paid $5 for a 24 pack of Dasani bottles.

Carbonated beverages and popcorn are what keep restaurants and movie theatres in business.

Any cable (usb, hdmi etc). They cost pennies to make.

Company I used to work for would give us cables at the price they purchased them for.

24. There is no difference.

Barrettes, hair clips and other bits of plastic that hold your hair in place.

I get these at dollar stores because the high-end pharmacies charge way too much.

Someone once said  ‘They asked the company why they were selling their product for $200 if it costs $10 to make it?”

And the company responded “because people buy them for $200”

26. Definitely bring your own.

Ibuprofen at a hospital.

“Yeah, we just went and got this bottle from the dollar store for $4.

Oh, that patient needs two of them? Sure, charge their bill $88.”

27. For something people actually need.

I watched a video on the sunglasses/glasses/eye-ware industry in middle school economics and we’ve been scammed this entire time!

Baby clothes are marked up by 1000% on average.

Buying clothes at Christmas for my niece, nephew, and stepson was flooring.

Now we have another one on the way. I’m hoping hand-me-downs will be like 90% of the clothing we have for it.

I was a certified optician and ran a lens lab for Pearle Vision in the early 2000’s.

The lenses, that’s a lot of markup. I started in a brand new store, and we had a brand new lab full of Essilor hardware. Latest and greatest at the time. Standard lenses, nothing special just the standard CR32 plastic in a typical prescription? They cost $2 or so and we charged $40 each. So a “basic” pair of glasses cost us $8 in materials and was sold for $130.

The worst markup was on the high end lenses. At Pearle (at that time) the top end were the MTPROA lenses. Micro-thin polycarbonate aspheric lenses with anti-scratch and anti-reflective coating.

Basically, if you have a strong prescription (+- ~3 or so) aspheric can make a much thinner and lighter lens that can give you the same vision a thicker traditional lens does. Add in anti-scratch ($) anti-reflective ($) and the cost of the lenses alone were around $400 for the customer. Pearle Vision’s cost for the lense blanks? $23.

The entire cost of the Essilor equipment in the lens lab at my location was only ~$250000, and we regularly sold $800+ glasses.

And, the part that I really hate, Mainecare (Maine medicare) at the time wouldn’t provide coverage for anti-scratch coating (it was technically an “upgrade”). We couldn’t buy lense blanks that didn’t have it. My instructions were to strip the anti-scratch coating when making lenses for Mainecare clients. I ran the lab. Guess what I never did.

Designer handbags, at least in recent years to meet the demand of the newly rich.

There’s a huge industry of Chinese immigrant workers in Tuscany, Italy, who manufacture the bags there, so that it can bear the coveted “Made in Italy” label

They are perhaps not that cheaply made but still not the value of the prices they command.

College textbooks on their 2nd to 100th edition.

What’s even worse it that on some editions, Pearson just gives u your textbook without binding. Just f**king paper, like the pages are in a loose paper pile. At least they give u punched out holes so u can put them in a binder, but for f**k’s sake, $130 for this s**t?? Cheap pricks.

Oh, and having to pay like $80 for online access, that only lasts for the SEMESTER, not permanent ownership. I hope they die out soon.

A lot of flipped houses. Be careful when looking at recently remodeled houses.

Most of these are cheap flips with nothing more than some new paint, flooring and appliances.

It becomes very apparent when you actually view the house in person and the doors don’t close right, the windows are old, and everything just feels cheap

33. And tested on poor animals.

Many mattresses, especially memory foam ones.

Sodium Chloride IV bags in hospitals in the United States.

It costs less than $1 to make but hospitals can charge over $200+ per bag.

Definitely won’t be purchasing any of these things anytime soon (I hope).

If you’ve got something in mind that would fit on this list, add it down in the comments!