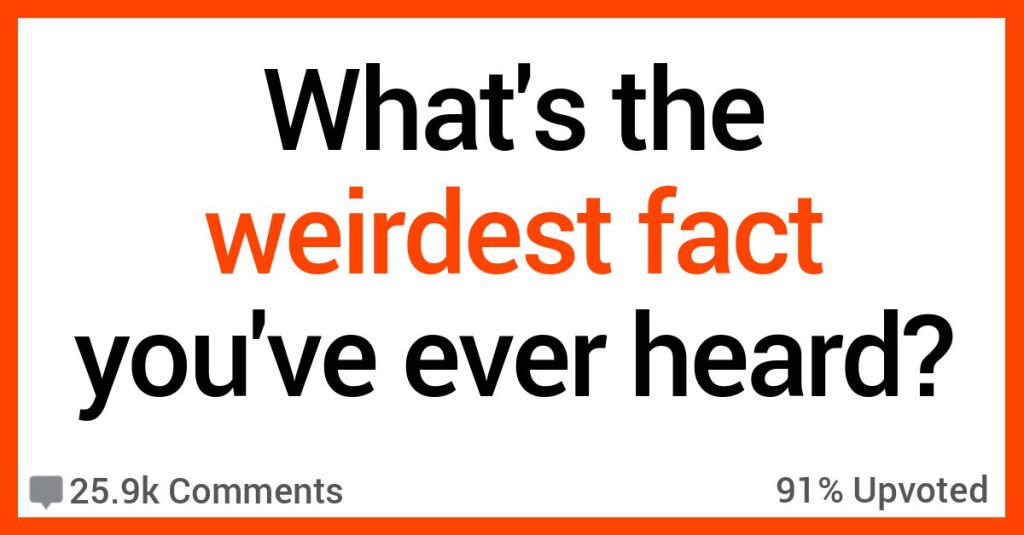 What’s the weirdest fact you know?

I’m talking about the most out-of-this world, bizarre fact that most human beings should have no business knowing?

Think about that while we dive into some oddness!

Let’s see what kind of weird facts AskReddit users have rattling around their brains.

“Squirrels need to fall 4800 miles to die because it gives them long enough to starve.

This is because they can survive their terminal velocity.”

“During a long FBI undercover sting operation to uncover corruption in the Cleveland PD, the FBI used a T-Shirt factory as a front for an illegal gambling operation, not only did they turn a profit with the T-shirt company but there are a few companies and bars walking around with T-shirts made by the FBI, including the Cleveland PD’s softball team.”

“In ancient Rome, having a large p*nis resulted in being ridiculed. It was thought the bigger the p*nis, the dumber and more brutish you were.

In other words, I would have been the smartest man in Rome.”

“Otters hold hands while they sleep so they don’t float away.”

“The Hawaiian state fish is called a “humuhumunukunukuapuaa”.

“Bees can vibrate their bodies super fast which produces a lot heat.

In order for a hive to defend themselves from intruders like wasps they will dog pile the wasp while vibrating and it will eventually cook the wasp alive.”

“Otters have a small pocket underneath their armpits where they like to hide their favorite rocks.”

9. Think they were ready for a kid?

“The youngest parents in the world had a combined age of 17.

“About 1 cup of ground apple seeds contains enough cyanide to kill a human. Smoothie anyone?”

“Killer whales and dolphins can learn to communicate with one another and form hunting parties together.”

“The release of the film JAWS had such an impact upon people’s view of the ocean that the professional association of diving instructors PADI reported that their numbers had dropped by somewhere around 60%.”

“Fidel Castro loved dairy so much that he invested in trying to breed a cow that could survive in the climate of Cuba and still produce a lot of milk.

He failed over and over for years until one day a cow that was exactly to his specifications. She produced obscene, record breaking amounts of milk even for a regular cow and could live in Cuba’s sweltering climate.

There were regular updates on her health in the Cuban national newspaper and he loved her so much that when she died he erected a huge marble statue of her in her honor.”

“Lice are the human equivalent of fleas, but unlike other species, humans have different types that are exclusive to different parts of the body- head lice, body lice and pubic lice.”

“A male giraffe will taste the urine of a female to know if she’s fertile.”

“Necropants are a pair of pants made from the skin of a dead man, which are believed in Icelandic witchcraft to be capable of producing an endless supply of money.”

“If you have a shrimp allergy you also can’t eat cicadas.”

“Before clocks were invented clockwise and counter clockwise were called deisul and widdershins.”

“Most dying people don’t just slow down breathing and stop silently like the movies. The agonal breathing they do the last few hours or minutes is often startlingly loud.

But it makes their CO2 so high that they are unconscious and not suffering, it’s just hard on the hearer.”

“Probably the most innocent fact here but- chickens (hens) have an egg song when they lay an egg.

“Male hedgehogs mast*rbate for pleasure and you have to be careful picking them up because sometimes they have semen on their feet.

It’s something you have to look out for when you’re a hedgehog owner like myself.”

“Urine is historically one of the biggest exports that Newcastle UK ever had.

It was used for a variety of purposes especially for making ammonia to make paint.”

“Dr Jekyll and Mr Hyde was a really popular novel, and was made into a stage play.

The actor playing the eponymous role(s) was so good at switching from the good doctor to the evil Hyde that people wrote to the police claiming that he absolutely had to be the real Jack the Ripper (who was thought likely to be a qualified doctor based on the way he dissected his victims).

They thought no normal person would be able to make such a transformation.”

“You can neutralize the smell of a rotting corpse by covering it with the ashes of a common camp fire!

Any wood ash should work, friends.”

“Licking marshmallows and sticking them on a car on a night below freezing will cause the marshmallows to adhere so strongly that if they are removed while still frozen they will take the car paint with them.”

“An important predator to the Canadian Moose is the Killer whale.

The Moose will swim over seastraits and get picked off by the killer whales.”

“That in WWII the United States designed “bat bombs”

The idea was that you drop them over a Japanese city, which were largely wood structures at the time. The bats roost in attics and so on, then after a certain amount of time they detonate.”

“It’s illegal to be intoxicated in a bar in Alaska.

I won a trivia game at work because I happened to know this obscure fact. The lady organizing it accused me of cheating because no one had ever known the answer to “in which state is it illegal to be drunk in a bar?”

I’ve known it for so long I don’t even remember where I learned it.”

“Rats constantly leave a trail of urine while dragging their tails. You can follow the trail with a UV light.”

“The farthest fall for a human being to survive without a parachute is 33,300 feet.”

“Many deaths in the Middle Ages resulted from pigs wandering into peasant homes and eating babies out of their cradles.”

“MLB umpires are required to wear black underwear in case their pants split during a game.”

You’re walking down the road, and you see a car crash. Someone gets out of a car, and you realize it’s someone you know, so you call their name. They turn, and crumple to the ground.

What happened? They dislocated a bone in their neck, and when they turned their neck, they fully snapped it. There’s a bunch of stories of this happening to people, which is very scary.”

In the comments, tell us the absolute weirdest fact that YOU know.