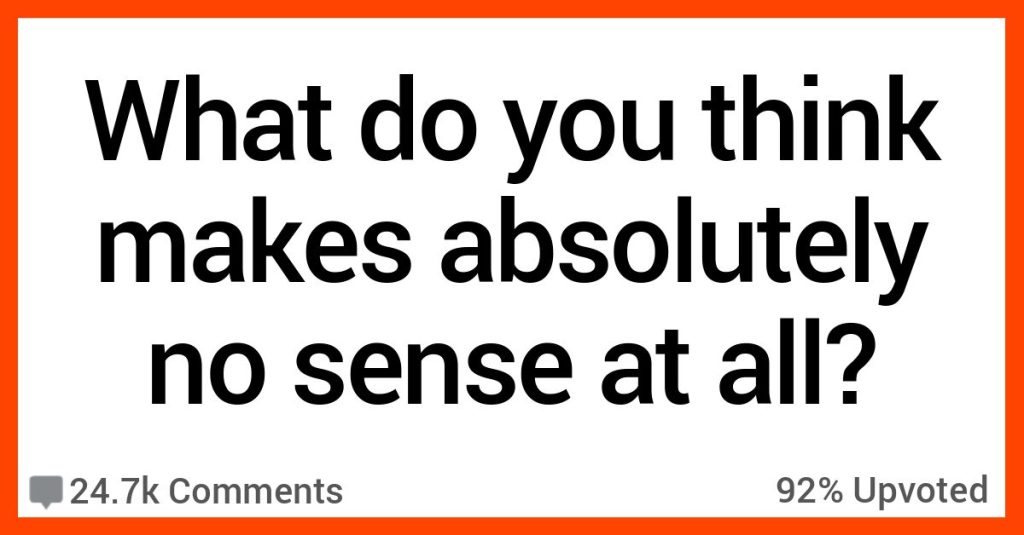 It usually seems like there’s order to the world, right?

That the things that happen were always supposed to happen, that there’s some kind of pattern to it all, or someone in charge that at least thinks they know what’s going on.

Other times, though, you stand back and look at something that’s happening, or something that exists, or a process that persists, and think nah.

These things definitely fall under that umbrella, if you ask me.

How Hawaii has an interstate.

How many people are famous even though they have absolutely no talent.

It’s not what you know, it’s who you know. That’s life in many places. Plenty of famous people have famous friends or are connected by family to other celebs.

You’re right though about how little sense it makes to have people being famous even though they have 0 talent.

The platypus looks like whoever created it decided to cut and paste various parts from other animals and call it done. In fact, it only gets weirder the more you learn about it.

The duck billed platypus is so strange looking that when the man who discovered it (for classification’s sake anyway) sent a taxidermied specimen back to the royal society in London, he was accused of sticking a bunch of different animals together to claim a new discovery.

The males have a venomous spur on their hind legs, which is capable of incapacitating a fully grown adult human.

The pain of platypus venom can last anywhere from a few days up to a few months. Keith Payne, a former member of the Australian army, was hit with a Platypus spur on his hand, and described the pain as “worse than shrapnel”. He still reported problems such as pain and stiffness with that hand 15 years later.

Toddlers! Wtf is going on in their little brains to make absolutely no sense?? Sorry just spent a ton of time trying to get my kid to do something he wanted to do until I told him to do it…

why customers continue to gripe at me, a lowly store employee who literally has NO part in what items the store stocks, about our store being out of stock of an item.

6. Someone has thought about this a lot.

That famous Life Cereal ad, where the kids are like “He likes it!” …but then they cryptically add “Hey Mikey!” for… some reason? Like they’re trying to get his attention after having interacted with him, rather than before…?

Maybe the child actors wouldn’t read their lines properly and they just had to go with it? It’s gibberish, like everyone involved in its production was retiring the next day and didn’t give a god damn, but there it is in the cultural consciousness regardless, and I choose to angrily dwell on it in some vain attempt to exert control over my reality.

7. I will never understand this.

There are trash cans literally everywhere, and people still fill the need to just throw their shit on the ground.

On top of that, now I’m seeing paper masks everywhere too. And as a Canadian, I legit expected more consideration.

8. If I understood this I’m sure I’d be agreeing.

Astronomer here! Dark energy. Basically if you look at all the mass in the universe, you would assume the universe is pretty close to constant expansion, no longer expanding, or maybe someday collapsing in on itself. In actuality, it turns out the universe is not only expanding, but also accelerating, which makes no sense. The only way to explain it is if 70% of the universe is made of some unknown form of energy that only really affects things on the very biggest scales.

The insane thing about dark energy is it’s such a tough problem to begin to understand that we first discovered it in the 1990s, and the first experiments to study it better are just really happening now. That is literally as long as some careers, just trying to think of how we might begin to study it! And I honestly would not be at all surprised if we don’t learn the answer in my lifetime to what dark energy is. It’s just that hard to begin to figure out how to make sense of it.

Like what would even happen if, hypothetically speaking, there was some massive pandemic and people started simultaneously losing their jobs and therefore health insurance due to an unprecedented market downturn?

That would be the worst!

The fact that the government knows exactly how much tax you owe but doesn’t tell you unless you under-pay.

11. References for teenagers are a joke.

Dust. Something sits there and does nothing and it gets dirty.

How universities are charging full price to learn from home!

My friend had to pay for a mandatory transit pass as part of her college fees. To take college courses from home.

Also there are bullsh%t fees like the “campus fee” people are still paying. What campus? Your house?

Clouds. Literal tonnes of water just hanging there in the air.

that famous/rich people get a lot of things for free, while they are the ones that can afford everything

You can shatter a bone and it will heal itself but if you get a tiny cavity you gotta get that filled.

18. That goes double when it’s a young child.

Forcing an apology. They don’t mean it and only said it to appease whoever told them to apologize. They’ll do it again most likely.

I never figured it out and went to another dentist surgery.

How good people who do everything right can just get f*cked over and their lives destroyed in a split second.

the physics and science in tv shows, especially superheroes shows…

How someone can be a flat earther. im convinced now its a free “told u so” trip into space.

You can drink a drink but you can’t food a food.

How certain people still have a large following after doing something unforgivable.

That hypnosis is an actual, documented, proven thing.

OJ Simpson, one of the nicest men I’ve ever met. He was nice to me, nice to my friends. The conversation was filled with warmth and humor, even wisdom.

We talked for 90 minutes and then The Juice said, ‘You know what, I’ve got to be going, thank you for your hospitality.’ And we said, ‘Good night,’ and he just walked out the room.

And as soon as the door closed, we all looked at each other like, that motherf*cker did that shit.

Influencers, why the f*ck do they have followers.

In America, you’re in a weird limbo stage between the ages of 18-21.

You are able to vote, join the military, take on tons of debt, get the death penalty/life sentence.

Yet you can’t drink, smoke or gamble.

You have the responsibilities of an adult, but not the freedoms.

mankind, why do we not learn from history and do better?

That you need credit to establish credit.

That someone can go to jail for 12+ years for distribution of Marijuana but a drunk driver who kills 2 people only goes to jail for 3.

Working 40 years or more of your life just to maybe have enough money to last you until you die.

No one wants bullshit : everyone is bullshit.

34. Hahahaha I never really thought about it.

Cartoon suns being drawn wearing sunglasses. Like what exactly are they protecting their eyes from?

Most of humanity’s social norms and customs. If you ever step back and take an impartial look they make almost no sense at all. Many we do because that’s what we’ve always done.

When you have a quirk that isn’t “socially acceptable” and anyone you finally confide in are just like “bro just do it, own it”. That’s the point, I can’t, because society will look at me differently.

38. Why would anyone want to do that?

Putting a ‘skip intro’ button on The Simpsons.

Why do these things exist? Why are humans?

If you’ve got answers to either of those questions, hit me with ’em in the comments!