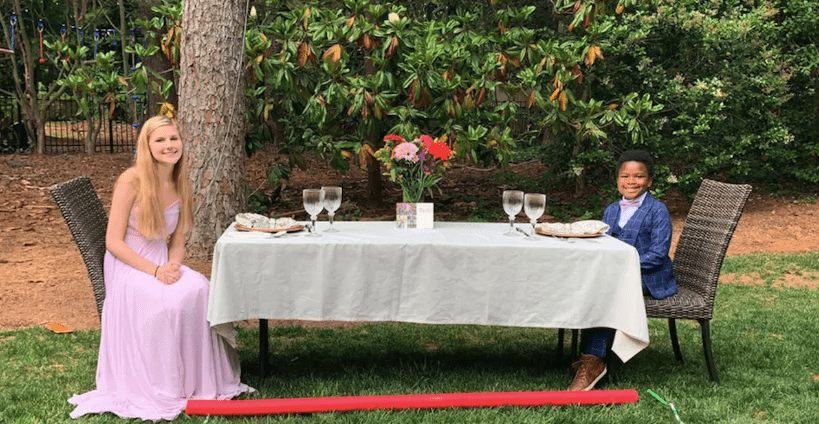 7-Year-Old Holds the Sweetest Backyard Prom for His Babysitter

When 7 year old Curtis Rodgers heard his babysitter, high school senior Rachel Chapman, wouldn’t be able to go to prom this year because of stay-home mandates, he decided to do something about it.

Rachel had been babysitting Curtis for more than a year and they’d developed a close relationship. He knew how disappointed she was to have to miss such a milestone in her last year of high school.

Keeping social-distancing in mind, he, along with his mom Elissa, carefully planned a prom for Rachel in his backyard. There was food, music and dancing–just like a real prom except much more adorable.

Rachel’s mom, Becky photo-documented the special event and shared the images on Facebook. Everyone involved was surprised when the pics went viral. So far, a whopping 31,000 people reacted to the sweet post and there were more than 3,000 comments. An additional 42,000 shares solidified this prom was officially famous and the best one ever.

Becky described the magical evening with Grown and Flown:

Curtis had the menu all planned — they would start with apple slices and peanut butter — their usual afternoon snack. He remembered her favorite drink — Diet Dr. Pepper — and that she likes to mix the ketchup and mayo to dip her fries. So sweet. They had tropical smoothies for dessert.

Then they danced. He made a play list. Oh, and his mom used a 6 ft. pool noodle to help Curtis understand the distance they needed to keep. He walked with Rachel with the noodle between them.

Rachel’s dress, which she had planned to get hemmed before her high school prom, was a little long for her, but she and Curtis managed to dance to a few tunes.

It’s so sweet that Curtis planned such a nice prom for his friend Rachel. It will be an evening she’ll never forget.