When life gets in the way, it’s easy to forget about the people around us. This includes family, friends, and our neighbors. When we cut through the buzz of chaos, it becomes easier to give back to those we care about. When it comes to your community, a little bit can go a long way. After all it takes a village…

8. The soft side of police officers helping children in need

“Another side of police work. Last week, colleagues were notified in Woensel-Noord. The ambulance had just arrived there because a woman had gotten a hypo, she had low blood sugar. The woman was taken to the hospital for a check-up, but there were still 5 young children in the house.

7. A community of unity and solidarity in the name of freedom and democracy

People taking part in the #HongKongWay protest in Kwun Tong started singing classic protest song – Boundless Ocean, Vast Sky (海闊天空). One of the lines goes “forgive me for being wild and freedom-loving my whole life, how would I fear that I would fall down some day?” #HongKong pic.twitter.com/gtFGQ4YXse

A peaceful protest was started in Hong Kong by over 200,000 people, holding hands. It shows that this community is peaceful even when facing adversity.

Per the New York Times:

“Hong Kong residents on Friday night formed human chains across large parts of the city in a call for direct elections, a test of the continuing strength of the months long protest movement and a display that recalled a major anti-Soviet demonstration from 30 years ago.

Participants fanned out across three routes over densely populated sections of Hong Kong Island, Kowloon and the New Territories. Organizers said on Saturday that more than 210,000 people had participated, covering a total length of about 35 miles.”

17-year-old David Ledbetter registered people to vote as they waited in line at Popeyes for the new chicken sandwich https://t.co/byjouHqrQD

A seventeen year-old stepped up to prepare people for the upcoming elections.

“With the hype around Popeyes chicken sandwiches, a savvy teenager saw a chance to make a difference in his community. The long lines outside a Charlotte restaurant signaled a chance for him and a group of others to engage people and remind them to vote. David Ledbetter, 17, spent his Saturday walking up to people outside a local Popeyes and handing out sample ballots and voter registration forms.

“We were seeing how long the lines were [at Popeyes] and figured we would try to go get individuals to vote,” the high school senior told CNN. “I was just hoping that the individuals would register to vote.”

5. How judging a neighbor turned into giving back at a time of crisis

Randa Ragland received a note from neighbors about the poor condition of her yard.

She told CBS42, “I opened it and it was pretty much [the sender] shaming me for my yard,” Ragland said. The writer of that letter accused Ragland of not caring about her home. At one point, the sender wrote that “your eyesore is affecting the resale value of our homes,” and that Ragland needed to “do better.”

Ragland had been struggling with her 3 year-old son’s health while barely keeping her head above water. She posted the note on Facebook and received the love from the neighborhood. Many took lawn tools and mowers over to clean up her lawn. Their kindness went a long way.

4. Everyone deserves a friend

“I have to brag on my son. I told him that as a back to school gift, I will make him any shirt he would like. It could have anything- a basketball theme, football, etc. which are all his favorites. He thought a while and said, “will you please make me a shirt that says ‘I will be your friend” for all the kids who need a friend to know that I am here for them?”

Never underestimate your kid’s heart for others! I love my sweet Blake!
#stopbullying”

3. An incredible friendship filled with caring and love

I hope this little update will bring some sunshine to your rainy day here in La. We are reaching the 2 month mark since my neighbor Norma has come home from the hospital and I am so happy to share that she is continuing to prove the doctors and nurses wrong by continuing to THRIVE! To prolong the remaining funds to prevent her from having to be moved into a county facility, Norma and I have decided to move her into my apartment across the hall where she now has her own beautiful room and bathroom! She loves it! I do most of my work at home so I am here most of the time to care for her so it only made sense to the both of us. She is my adopted grandmother and I am her grandson she never had. 🙂 We will still have caregivers coming in to care for her as well as her weekly hospice visits from the nurses and doctors. I just wanted to let you all know Norma loves reading your comments and I seriously think all the support and love is keeping her healthy. Now who wants to come to dinner? ?#myneighbornorma… I mean #myroomatenorma ?

Chris Salvatore was 27 when he moved to West Hollywood next to his neighbor, 85 year-old Norma Cook. They became fast friends! Four years later, she began suffering complications from Leukemia. She had no family and could no longer care for herself, so he moved her into his apartment. Later, she was put into hospice care and passed away peacefully with Salvatore by her side.

“The last thing she did was put her arm around my neck — she was so weak, I don’t know how she did it — and pulled me in and kissed me and said, ‘I love you.’”

“She was a beautiful human She changed the world with her big heart and ability to speak with anyone, of any age.”

2. When a neighbor buys a home for an elderly woman 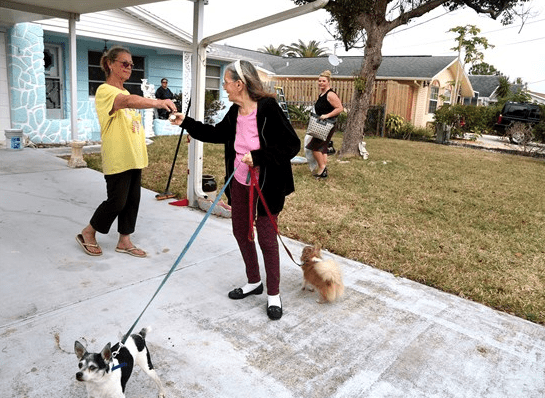 Angie Tyma lived in her home for 35 years. When her husband passed away, the house was bought by a friend of the family. Angie would then pay rent to the new home owner. Little did she know, that friend quit paying the mortgage and the house was foreclosed upon. Angie was forced to move to a motel. Her neighbor, Danielle Calder, stepped up and bought the home at auction for over $160,000. She couldn’t bear to see her lose her house.

“Quite honestly, I didn’t need another house,” Calder, 65, told TODAY. “But I needed her. I couldn’t see her living in a motel room… she’s been here so long. Everyone looks out for her.”

1. This neighbor saved a life

KSHB reported a story of a man who took care of his elderly neighbor reporting,

“John Connelly tries to lend a helping hand to his neighbors as often as possible. Most notably, he’ll shovel snow and melt ice for the elderly woman next door. He even brings her paper directly to her doorstep so she doesn’t have to walk to the sidewalk. However, he noticed Wednesday morning that the papers he was leaving on her doorstep were beginning to pile up.”

Connelly responded quickly by knocking on the door. To no answer he called the police. His sweet neighbor had fallen and couldn’t get to a phone. She’d been there three days but survived due to Connelly’s quick thinking and routine check ins.

These stories really raise the bar of kindness within communities. But it also just makes us all more aware of our surroundings and how to reach out a helping hand.

Which one was your favorite? Let us know in the comments!