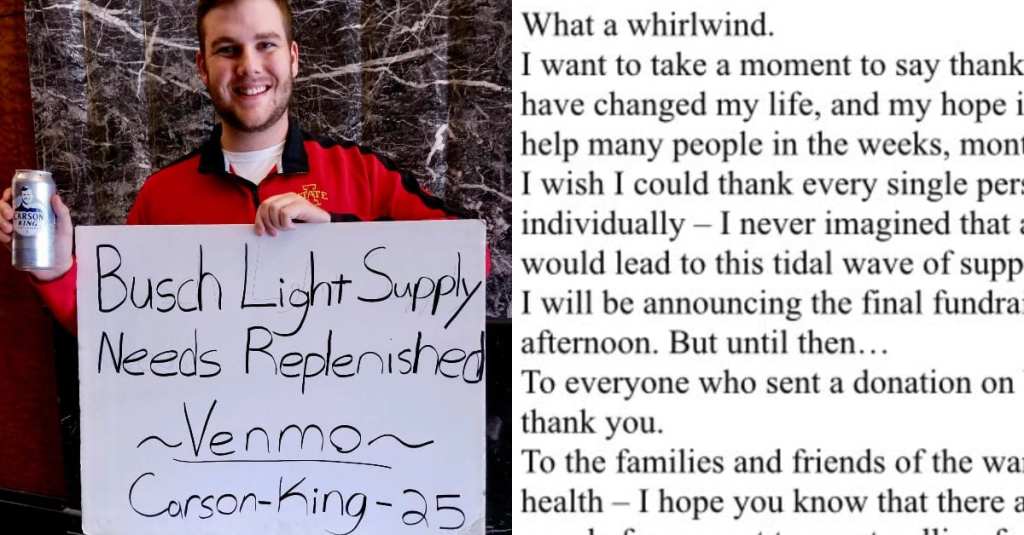 Carson King is a pretty smart cookie. Even if his mom did initially give him a hard time about the sign that made him a viral story. King is an alumnus of Iowa State University and he brought a sign to a Cyclones football game with a sign that read, “Busch Light needs replenished. Venmo Carson-King-25.”

King was shown on TV during a break in the football game and his Venmo account was flooded with cash. He quickly had $1,000 donated to him, so King asked his parents for advice about what to do with the money. They told their son they thought it would be a good idea to donate the funds to a children’s hospital.

Simply amazing. We’re overwhelmed by the generosity #ForTheKids, and we could not be more grateful. Gifts from across the country will now help us care for kids from all across the country! pic.twitter.com/sYvfi9dXjk

The story went viral and King set a fundraising goal: a whopping $2 million. He ended up hitting the mark three days early, on September 27.

The hospital King and his family decided to donate the money to is the University of Iowa Stead Family Children’s Hospital and King made a visit to the hospital to meet some of the kids.

King upped the ante even more and Busch Light matched donations and backed the final push to raise an incredible $3 million for the hospital.

We Did It! Thank you to all the Local Busch Light Distributors across the state for the final $41,000.00, making this last push possible! 3 Million Dollars for @UIchildrens! #ForTheKids pic.twitter.com/GvrsSPoahP

A pretty amazing story, to be sure.

And remember, if you have a good idea and it seems a little goofy at first, follow through with it because you never know where it will go and how you can impact the lives of others!