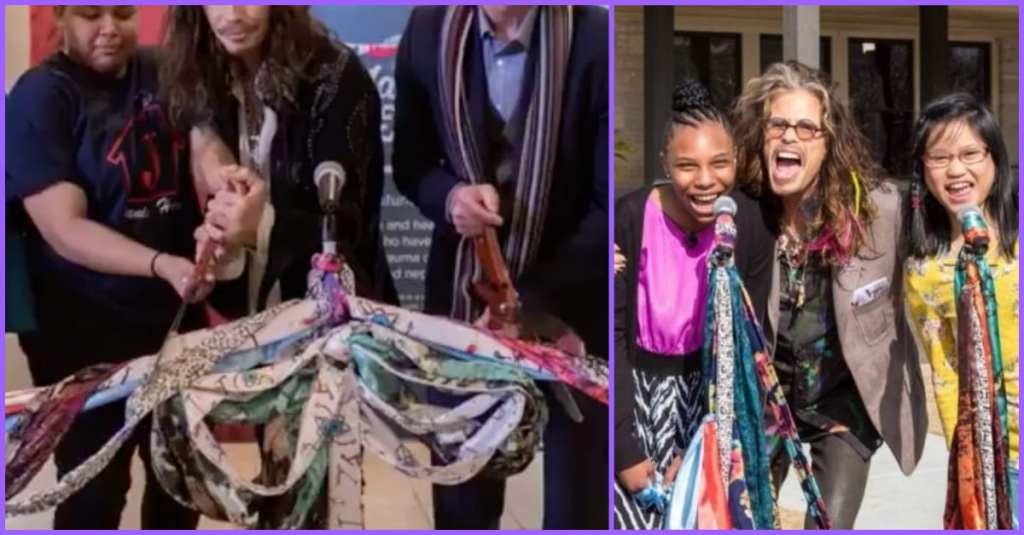 Inspired by the 1989 Aerosmith song, “Janie’s Got A Gun,” Steven Tyler is continuing to help abused and neglected girls through his Janie’s Fund foundation. This time it’s a second “Janie’s House” in Memphis, Tennessee. The first location is in Atlanta, Georgia.

WATCH: Steven Tyler just opened a home for abused girls named "Janie's House," which was inspired by the 1989 Aerosmith hit "Janie's Got A Gun" https://t.co/lI9n5QGCUU pic.twitter.com/duULoJEXvc

Tyler and company “cut the scarf” at the Memphis center’s launch recently, and he had this to say:

“This does my heart and my soul good. This is real – to help even just one girl through Janie’s House is a dream come true… just when the world feels over, you can turn into a butterfly.”

The center is more than 39,0000 square feet, has enough space to house 14 girls and can provide services for up to 30 girls annually. It was made possible by a $500,000 donation from Janie’s Fund.

Naturally, the response on social media was extremely positive…

Bravo to Steven Tyler,Awesome kindness with constructive philanthropy! Hearts together forward in progress!!!

Some wish this had been around when they were growing up…

I applaud all of @IamStevenT efforts in creating a warm & welcoming environment, to help all females, recover from abuse &/or neglect ❣️ I cannot imagine how different my life could have been, if @janiesFund was around in the late 70’s/early 80’s, but I’m a #Survivor & Steven

Ultimately, it comes down to helping those in need…

I love that you have done so much for these girls who have gone through some of the worse kinds of abuse at the hands of those who was supposed to love and protect them. To have a place not only to go where it's safe, but to receive the help that they need to help them feel safe.

Aside from the inspiration he drew from Aerosmith’s song, Tyler dreamed of opening the center during his time in rehab:

“While I was there, all the girls I met had been abused either physically, mentally, or verbally, or at least 90 percent of them all.

So when I got out of there, I laid it all on Janie. I said, what are you going to do?”

Some of the girls helped by Janie’s House were present for the ceremony and one 14-year-old shared her thoughts:

“The reason that I am at Janie’s House is because I experienced sexual abuse at the age of 3.

Through Janie’s House, I can learn a lot about my past and learn I was not the only one that had been through the same problems.”