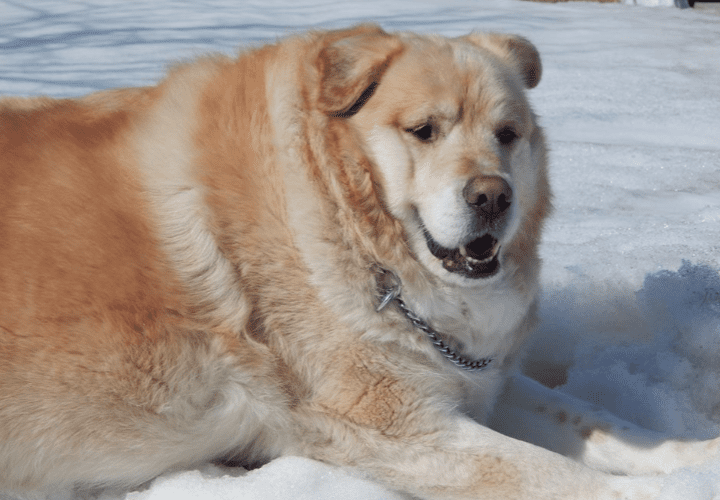 An Owner Demanded His Overweight Golden Retriever be Put to Sleep. A Vet Refused and Found Him a Loving Home.

Ready for a story that starts out really sad and depressing but has a very happy ending? Good, then you’re in luck!

It’s always sad to see an extremely overweight dog that struggles to simply take a walk or even to get from one part of a house to another. And, unfortunately, there are a lot of owners out there who let their dogs’ weight get completely out of hand.

This was the case with a sweet Golden Retriever named Kai whose owners decided that he had become too heavy and too much of a burden and wanted to have him put down.

The vet refused to euthanize Kai and called the Misfits of Alberta Animal Rescue in Canada to help Kai find a new home.

Kai eventually found a new owner named Pam Heggie, who was overwhelmed with how obese the dog had become.

“I could not believe my eyes. His size was staggering. The pictures don’t do justice to how huge he was, and how difficult even a few steps was for him.”

Kai weighed a whopping 173 pounds when Heggie became his new owner and he had to lose more than half his weight. Heggie knew it would be a tough road but she was determined that Kai would lose the weight and live a long, happy life.

“I do not know anything about Kai’s previous owners and quite honestly, I prefer it that way. I don’t believe in shaming people so I’m not sure blame is the right word. I do believe that as animal caretakers, our job is to help animals be as healthy as possible. We owe them that much. I believe educating people in how to care for their animals is more powerful than shaming or blaming.”

She started out slow, taking Kai on walks and having the dog do water therapy. Kai and Heggie kept progressing until the pooch was able to take long walks and even run in the park. Kai was 10-years-old when Heggie took him in and now the 11-year-old Retriever has lost 100 pounds and is healthy and happy.

“Kai exemplifies what we all find good in this world- an indelible spirit and unconditional love. He could have chosen to lament his past and give up but instead he chose to embrace the chance to be better. We all need to believe we can be better. He is a very grateful soul and I am extremely lucky to have him in my life. I am now his adopted mom and he will live out his life with me. I am the lucky one.”

Follow Kai’s adventures on Facebook and hats off to Pam Heggie for giving this beautiful dog a second chance at life.