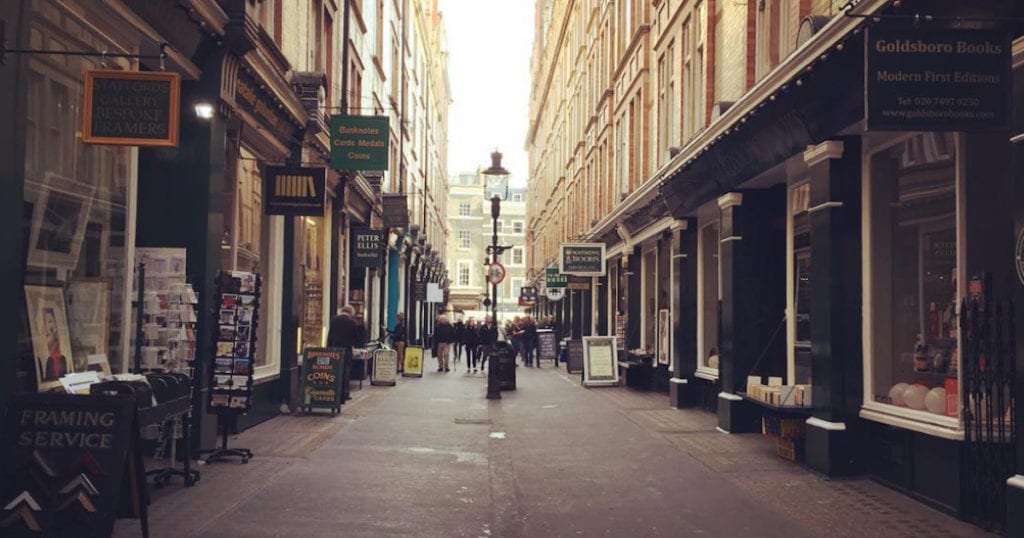 If you love books, you’ll want to plan a visit to a hidden alley in the center of London.

Cecil Court will steal your heart with its dozens of book shops and antique stores.

Find this quiet little lane near busy Leicester Square and prepare to fall in love.

Exploring Cecil Court is the thing bibliophiles' dreams are made of. Yeats was an early visitor of Watkins Books—the century old bookshop specializing in esoteric, rare titles—and we can’t help but wonder if any discoveries influenced his work.

Nothing in this alley has changed in one hundred years—it’s like a step back in time with its collections of old and rare books, stamps, coins, magic potions and wands.

It’s been said that Cecil Court was the inspiration behind Daigon Alley of Harry Potter fame.

I mean… who could it NOT be the inspiration?

Have you ever walked down the charming Cecil Court in Charing Cross with its Victorian shop fronts, traditional hanging signs and antiquarian bookshops? 🔹 Sat out in our sunny garden for lunch today and so ready for this amazing weather to stick around! 🔹 What’s one little thing you did for yourself today? 🔹 #prettycitylondon #londonadventures

Here’s something else very cool to know about Cecil Court: Wolfgang Amadeus Mozart lived here when he was eight years old and on tour. The Mozart family stayed with a barber named John Couzin and tickets for little Wolfgang’s London’s concerts were sold there. You can even find a blue commemorative plaque of this fascinating fact there. Londoners also like to say it’s where Mozart started composing .

Cecil Court was also part of London’s budding film industry when its first film company opened a shop there in 1897. For a while, it was nicknamed Flicker Alley because it became the center of film in the Britain.

Fellow booklovers, I'm sure you'll agree there are few places more thrilling than Cecil Court–it's a Diagon Alley of bookshops! I've just been into @goldsborobooks to sign copies of #thelakehouse; if you're looking for one, and unable to make it to a signing, the lovely people at Goldsboro can help. #cecilcourt #goldsborobooks #katemorton #diagonalley

So, whether you love old books, old cinema or Harry Potter type magic shops—or you love all three—follow your heart to Cecil Court just of Charing Cross Road.

It’s a trip that will remind you of all that’s good in our world.