Natalie Corona was considered a rising star in the Davis Police Department, according to The Washington Post.

Being a law enforcement officer was her lifelong dream. She wanted to follow in the footsteps of her father, a veteran of the Colusa County Sheriff’s Department. 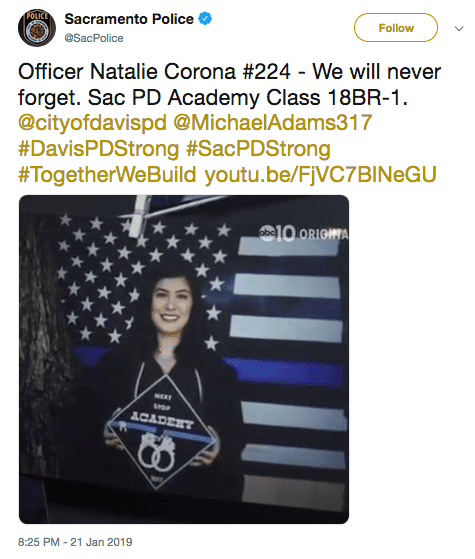 Her dream was tragically cut short, though, when she was killed during a routine traffic stop a mere five months after she was sworn in.

More than a thousand people gathered at her memorial service, and Dutch Bros Coffee was moved by her story. She was a regular customer at one of their locations near where she worked.

More than two dozen Dutch Bros locations decided to participated in a fundraiser, according to KCRA. For a period of time, they donated one dollar for every drink sold to her memorial fund, which was organized by the Davis Police Department. Over the course of the one-week fundraiser, the company donated $82,602 dollars, an incredible sum.

Corona was a person who consistently went above and beyond, delivering presents to victims of the California Camp Fire and more. Her death is a tragedy, but her legacy will live on and inspire us all to care for the people around us who are in need.