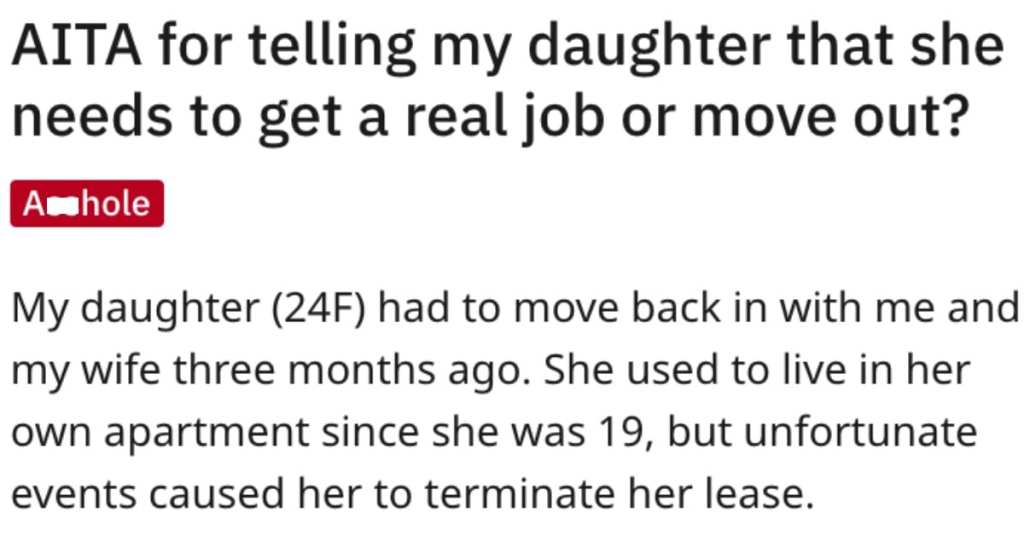 Dad Asks if He’s Wrong for Telling My Daughter to Get a Job or Move Out? Here’s What People Said.

Get a job or move out!

How many times have you heard about someone saying that to one of their kids?

It happens all the time…but this story from a father on Reddit’s “Am I the *sshole?” page is a little bit different.

Let’s see what happened in this situation.

AITA for telling my daughter that she needs to get a real job or move out?

“My daughter (24F) had to move back in with me and my wife three months ago. She used to live in her own apartment since she was 19, but unfortunate events caused her to terminate her lease.

Anyways, she’s studying at a close by university and working on her thesis. She’s also employed as an assistant. And they pay her on an hourly basis (so she has to document her hours). But they only give her her salary at the end of each semester, wich is basically a moderate lump sum.

But the fact that she’s not receiving a monthly income means that she’s not able to pay me rent in due time. I get that she’s still studying, and that she’s my daughter, but I can’t have a grown adult woman stay in my house rent free.

She started crying, and said that it is a real job, and that the lump sum will be just enough to cover her rent and her student loan debt. But I’m still not eager to sit and wait for her on her rent.

My wife overheard the conversation, and she’s really upset with me now. She said that I’m insensitive. My wife is usually at home, and she said that she can tell my daughter is overwhelmed. Apparently she’s working till early ours in the morning, and only been getting an average 4-5 hours of sleep since she moved in with us. She has to submit her thesis soon, which is a major deadline (a month from now).

My wife said “It’s not like she’s loafing or wasting her time doing nothing or playing video games.” My wife also told me that my daughters assistant work is a real job, and that she often works extra hours. Sometimes she’ll get called in for nonsensical reasons.

But that she never heard my daughter complain about it… but that her exhaustion is quite obvious. Well, apparently it’s not THAT obvious. If it was, why didn’t I pick up on it?

But my wife is ignoring me now, and I’m starting to wonder… AITA here?”

Hmmmm…let’s see what folks on AskReddit had to say about this.

This person said that YES, this dad is the *sshole in this situation, no doubt about it. 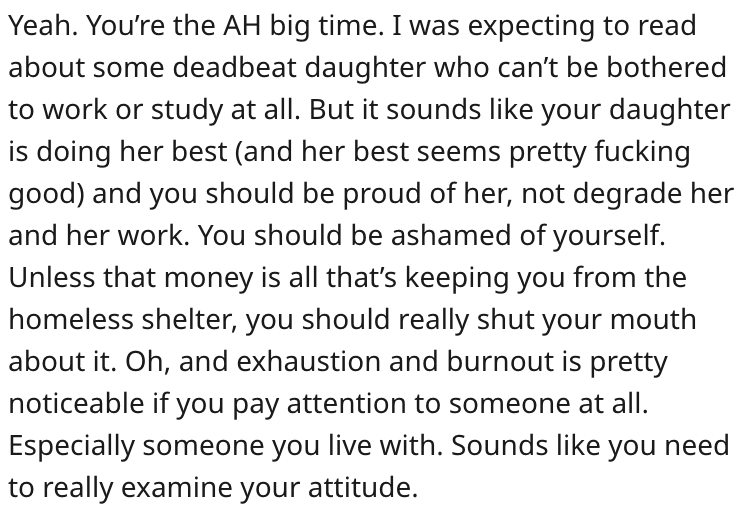 Another reader called the father a “buffoon” and said that he’s belittling his daughter. 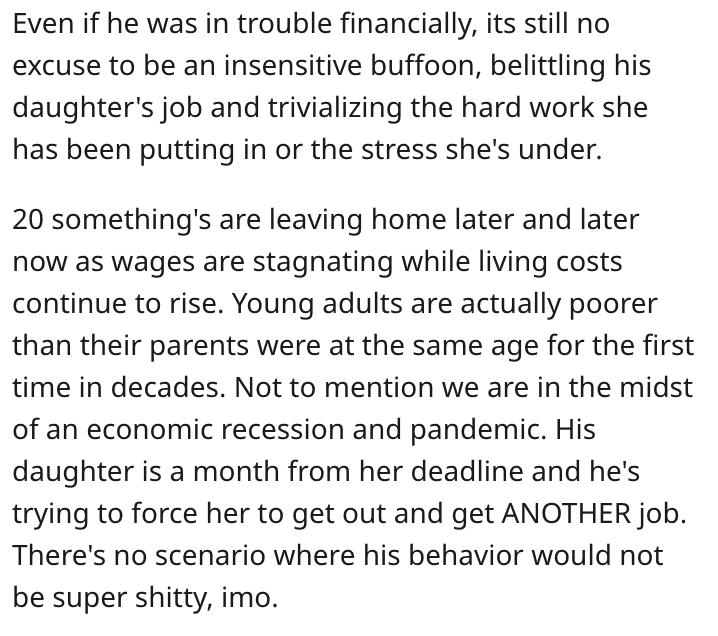 Another person said that they just don’t understand how parents can make their kids pay rent, especially when things are hard.

This person said the dad was definitely in the wrong here and he also doesn’t realize it because he’s insensitve.

Another Reddit user pointed out that working on a thesis is a TON of work and is just like having a job.

Finally, this individual said that the man’s daughter is working hard and the dad is being totally unreasonable.

What do you think about this dad’s actions?