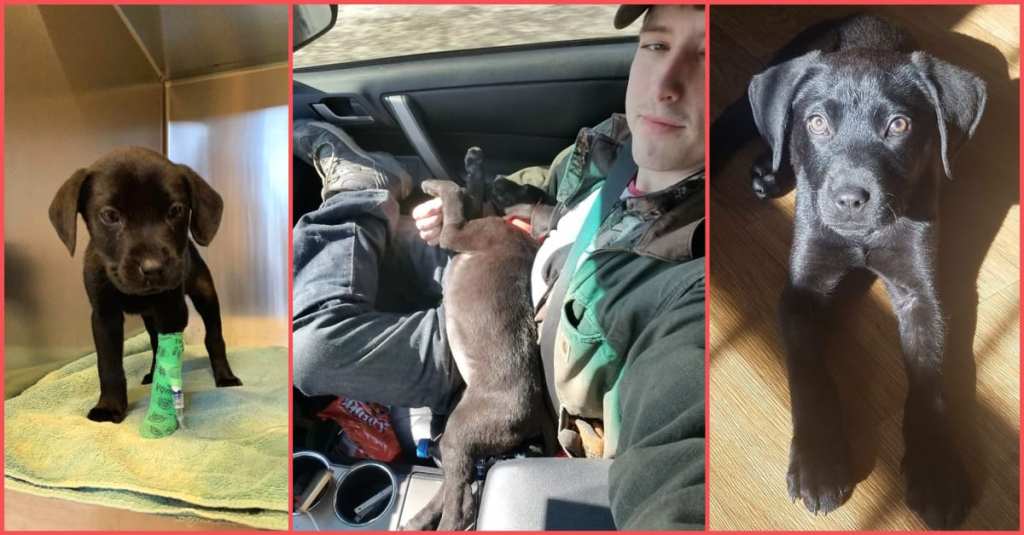 A black lab named Emerson was deemed sweet and adoptable by staff at the rescue organization NRF Maine. He was also deaf having contracted the canine parvovirus which caused seizures for him when he was a puppy.

“Once we got him home from the vet’s office from Florida, we realized he had hearing difficulties.

He doesn’t let it bother him at all, though he’s a typical puppy.”

One by one, all of Emerson’s brothers and sisters were adopted and Emerson still didn’t have a family.

But soon after his picture was posted on the group’s Facebook page, Powers received a letter from a deaf man named Nick who was interested in adopting a deaf pup with the hopes of establishing a special bond. “Right off the bat he said, ‘I’m deaf also and I feel like we’d have a good connection.’”

Powers processed the application that day.

Sure enough, Nick and Emerson hit it off immediately.

“When Nick and his Mom walked into the house to meet Emerson, Emerson made a direct line for Nick and sat at his feet.

That’s all it took.

I was sold that this was fate, and these 2 belonged to each other.”

Nick and Emerson are so happy together that Nick created an Instagram account called @nickandemerson to show off the special bond he’d always hoped for.

The duo has so far amassed more than 31,000 followers.

So proud of Emerson and how smart he is! He has done so well learning these tricks. He’s a food motivated boy ? . . . . . #nickandemerson #labsofinstagram #adoptdontshop #blacklabpuppy #blacklabsofinstagram #thatsahappydog #goodboy #deaflove #smartboy

Nick has even taught Emerson sign language for sit, lay down, and come. Videos of the pair’s sign language lessons and tricks are loaded to Instagram.