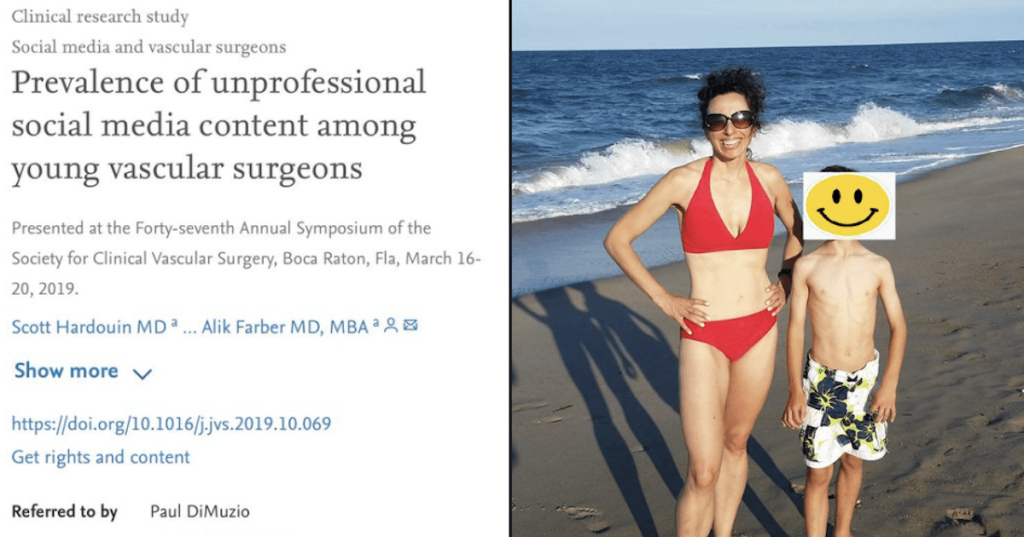 Misogyny is, unfortunately, still very much a part of our culture and pervades every industry, including medicine.

Yes, even highly-esteemed doctors and research publications make the mistake of judging women’s bodies. The Journal Of Vascular Surgery did just that when it published a piece on the behavior of younger vascular surgeons entitled “Prevalence Of Unprofessional Social Media Content Among Young Vascular Surgeons.” In the piece, it was women who were mostly called out.

In case you wanna know what’s happening in doctor twitter today: a “scientific” publication just announced that holding alcoholic drinks and wearing bikinis are unprofessional behaviors for a doctor.

What till they hear that med schools started letting women wear pants! pic.twitter.com/waoKfWW4qE

Doctors were scolded for “provocative posing in bikinis/swimwear” and “holding/consuming alcohol” on social media.

The Internet spoke—the hashtag #medbikini soon began to trend, as women in medicine posted pictures of themselves in swimwear to show that what they do in their off-hours has no bearing on their skills in medicine.

Last time I checked, I can wear whatever I want. #MedTwitter #medbikini pic.twitter.com/pij7HJGi0U

Some older doctors in the industry also let their voices be heard.

Ha! Found a selfie in a bikini. To the 28 year old “researcher” who says this is unprofessional for women doctors, I’m old enough to be your grandmother. #MedBikini pic.twitter.com/84CKW9nfhz

Surgeons chimed in, too.

Other professionals in the industry pointed out that the study was flawed at best and, at worst, had some serious ethical issues. For one thing, it’s been alleged that three doctors who conducted it used fake social media accounts to get the desired results. They are also all men in their mid-30s, and their implicit bias is evident.

So this study was published shaming physicians for being “unprofessional” by wearing bikinis or holding a beer in a photo? And the study was conducted by 3 men who created fake social media accounts to spy on applicants?

Some patients also felt it was a bit stalkerish.

2 Researchers sound CREEPY & CRAZY in this study. Very intrusive and sketchy. I’m not sure I want ’em as my docs

3 I’ll keep my smart & kind docs, who want to wear speedos/bikinis in their personal time

PS. How is the study even legal to do???

Others pointed out the obvious misogyny.

Misogyny is medieval. Do I have to wear my white coat at all times to deserve the title of "professional"?
Fun, sexy, smart & hard-working can exist in the same space. I can wear swimwear to the beach in my free time & be a competent & compassionate physician at work. #medbikini pic.twitter.com/bWC4tSEVTR

The outcry continued, and eventually, The Journal Of Vascular Surgery did the right thing, retracted the study, and apologized. However, the study did do some good by shining a spotlight on what is no longer acceptable in modern society.

Have you experienced misogyny in your workplace?

Because haven’t we all at one point or another?