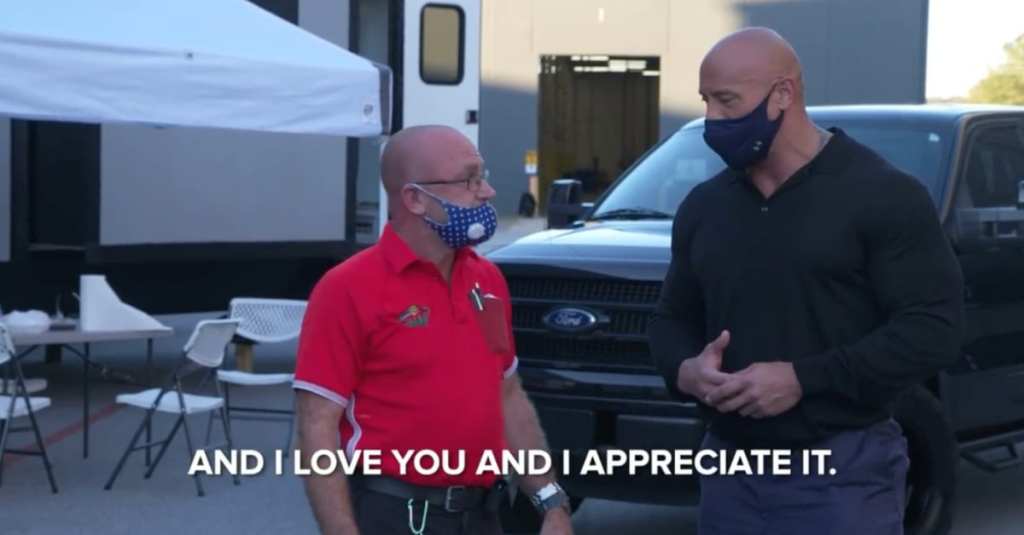 I think it’s safe to say that Dwayne “The Rock” Johnson is known as one of the good guys in Hollywood.

He’s had a long, tough journey from being a kid to a football player to a wrestler and now to a huge movie star.

But Johnson never forgot where he came from or the adversity he faced on his rise to stardom.

So when The Rock has a chance to give back to someone who helped him along the way, you know he’s going to do it.

And that’s exactly what happened when Johnson surprised an old friend and role model named Bruno.

Bruno took Johnson into his home when he was a homeless teenager in Nashville, Tennessee and he dreamed of being a professional football player.

“Bruno could’ve (and should’ve) said hell no, I’m not takin’ in some kid who I don’t know.

But he didn’t. He took this punk kid in and we became lifelong friends.”

Bruno took Johnson into his home again nine years later after Johnson’s football career stalled because of injuries…but this time he was determined to make it in professional wrestling.

So, to pay Bruno back for his kindness and generosity, Johnson bought his old friend a brand new pickup truck and surprised him with it. Take a look at this heartwarming video.

Hey, that’s what friends are for. You’re there for them when they need you the most, and vice versa.

Have you seen any feel-good stories on social media lately?

If so, please share them with us in the comments. Thanks!