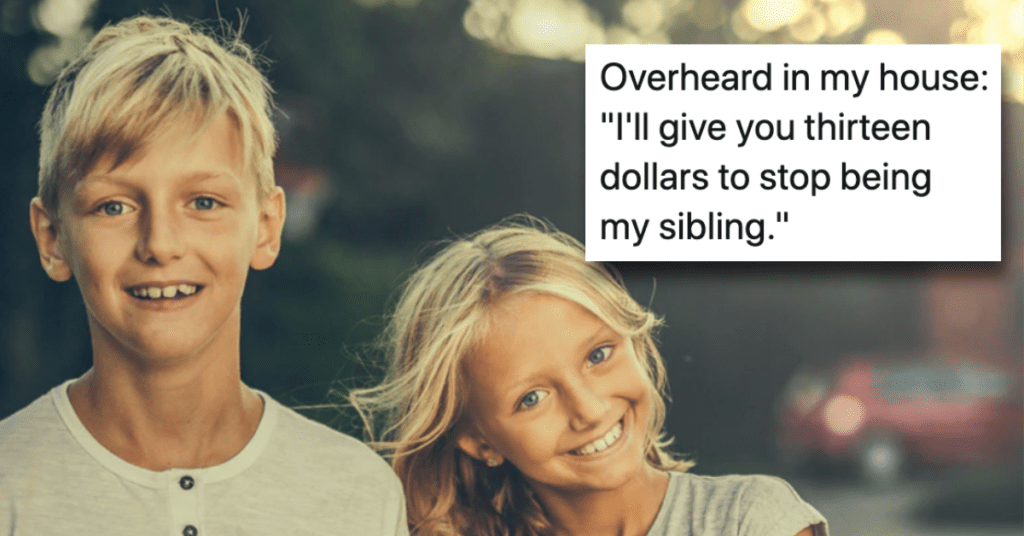 Enjoy These Hilarious Tweets About the Realities of Parenting Siblings

Oh, parents…we can only imagine the trials and tribulations that you’re experiencing right now.

Especially if you have MORE THAN ONE KIDDO to look after during these unprecedented and turbulent times.

You’re trapped in the house with no escape and, as you can probably guess, the kids are at each others’ throats…and then that spills over to the parents who then lose their minds and turn on each other, etc.

The whole thing is just a huge fiasco!

But, at least you can laugh with some of these funny tweets from parents who are parenting siblings…let’s take a look.

When a kid asks a sibling to play a game of tag, they're basically asking if their sibling wants to take a jog that ends in a fight.

We’ve all been there before.

No one is as obnoxiously well-behaved as a child whose sibling is getting yelled at.

Hell hath no fury like a child whose sibling touched the automatic door opener button before they did.

It’s a non-stop tug of war.

Stop before Mom gets here!

Nobody has a better bedside manner than a kid who’s trying to get their sibling they just punched to stop crying before their parents hear.

Overheard in my house: "I'll give you thirteen dollars to stop being my sibling."

8: I’m bored
Me: play with your brother or sister
8: don’t want to
Me: ok we spent thousands of pounds on fertility treatments to get them for you so you need to fucking play with them

What I said: "Don't kick your sister in the back"

What I meant: "Don't kick your sister"

What she heard: "Kick your sister someplace else"

And that’s not what I meant.

Asking your child to go get their sibling for dinner is just asking them to stand next to you and scream their sibling's name.

I'll have an order of a missing shoe, with a side of child crying because her sibling won't stop singing.

But let’s try to save time, okay?

If I could just go ahead and get a prescription for the toddler licking the floor that’d save me another trip here next week.
-Me at the doctors office with multiple kids.

"STOP TELLING YOUR BROTHER THAT HE DOESN'T HAVE RHINO POWERS!!" is something that I never knew I'd be yelling this often.

The dream is sleeping in on Sunday, the reality is the sibling rivalry cage match happening in the living room needs a referee.

Me: Hey bud, you want to read a book?

Me: Okay well I have to put your brother down for a nap. Just be quiet please.

3: [Leads a marching band through living room while on parade float]

How about you, moms and dads?

Are your kids driving you a little bit nuts right now?

Talk to us in the comments and tell us how it’s going!