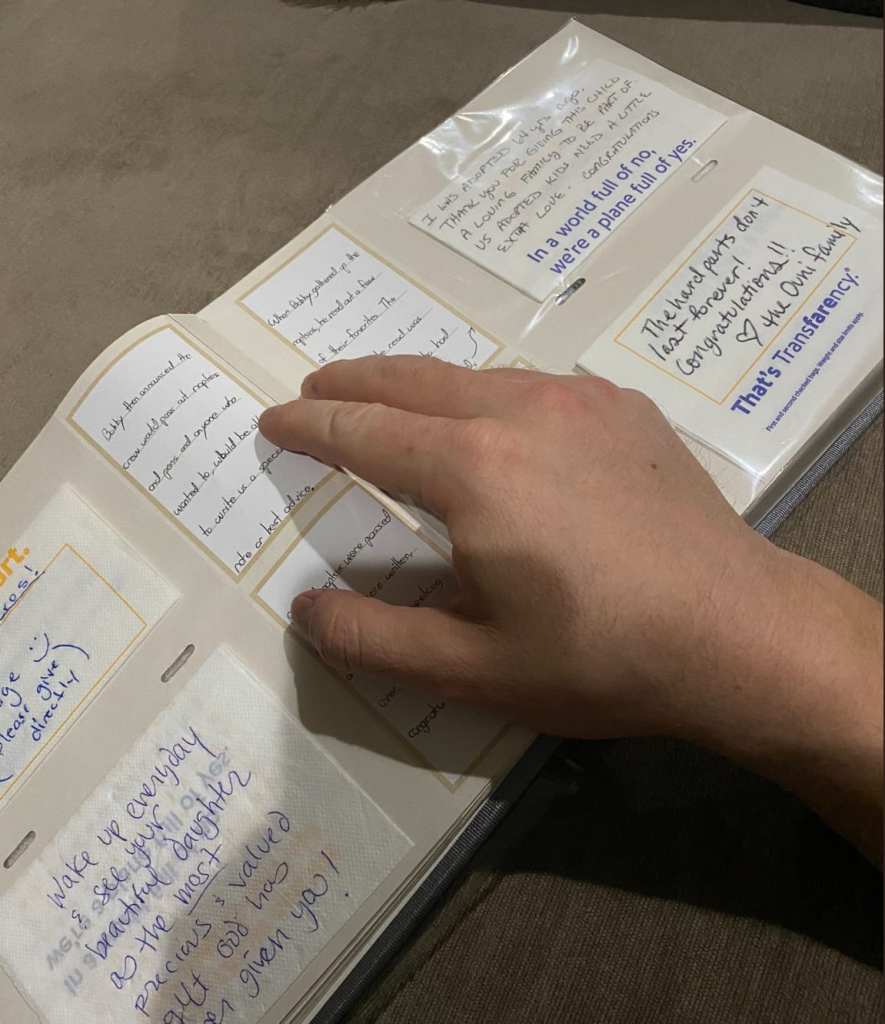 Becoming a parent opens up a whole new level of emotions. So much goes through the minds of new moms and dads. Joy. Anxiety. Then, come all the questions.

Will my baby be happy? Healthy? What does it take to be a good parent?

And, this flood of feelings and doubt start day one.

When Dustin and Caren Moore met their adopted infant daughter in Colorado, they were overjoyed to get to bring her home to California. But that meant an airplane ride only 8 days after her birth and a major anxiety increase in the already nervous Moores’.

Except the people on their flight made this once in a lifetime trip for the Moores’ even more special. Dustin took to Twitter to explain.

“It’s been a difficult week,” he posted. “But, rather than publicly air my grievances, I’d like to share w/ you the kindness strangers offered us the day we brought our daughter home. I hope our story uplifts  you and reminds you there is goodness to be had in this world.”

Not too long ago, my wife and I boarded a @SouthwestAir flight with our recently adopted infant daughter.

W/ clearance to return home to California, my wife carried our precious bundle, while I offered numerous apologies to passengers while maneuvering the aisle with 4 bags. /2

“Not too long ago, my wife and I boarded a @SouthwesternAir flight with our recently adopted infant daughter.

W/ clearance to return home to California, my wife carried our precious bundle, while I offered numerous apologies to passengers while maneuvering the aisle w/ 4 bags.”

Dustin said eventually his daughter needed a fresh diaper. One of the flight attendants showed him a clean space in the back of the plane and left him to change his baby.

When they returned to their row, the flight attendant named Jenny and another passenger offered their congratulations and asked why the little family had to travel with a newborn.

After a change, Jenny and another passenger complimented my beautiful daughter and politely asked what had prompted a flight with such a young infant.

I gave them the shortened adoption story, to which they hastily offered congratulations, and shared a few more kind remarks. /4

“I gave them the shortened adoption story, to which they hastily offered congratulations, and shared a few more kind remarks.”

Another flight attendant named Bobby also stopped by with congratulations. Then, to the couple’s surprise, Bobby made an announcement on the intercom that the Moores’ were bringing their new adopted daughter home. All the passengers applauded.

Then, we heard the intercom. The attendant Bobby came on and announced a special guest on the flight. Our daughter. “She’s just been adopted by her parents Caren and Dustin, and is making her way home.”

The entire cabin erupted in cheers and applause. /6

They were even more surprised when Bobby announced pens and napkins would be handed out so that if passengers wanted to they could write notes to the new mom and dad.

Dustin said he and his wife “sat in speechless gratitude” as the passengers around them offered more congratulations.

The crew gathered the napkins, then read a few of their favorites over the intercom.

“Rub each other’s feet, and rub the baby’s feet.”

“Always tell her you love her.”

“Enjoy every minute. It goes by sooo very fast.”

It seems as if Bobby and Jenny were once in a similar, but not quite the same, situation. As they gathered the notes to bring them to Dustin and Caren, they shared their own story.

Bobby and Jenny were married and during their honeymoon flight, attendants asked passengers to write them notes. It was a gesture they treasured and wanted to pass on whenever they had the opportunity.

When I had spoken w/ Jenny, she thought it was a perfect opportunity to pay forward the kind act they had been shown on their honeymoon.

Even as we disembarked, people kept approaching us and wishing us well, and complimenting our beautiful daughter. Our hearts were full. /10

This kind act and outpouring support from people they didn’t even know was beyond meaningful.

“What all of those perfect strangers and attendants did not know, was the emotionally tender state of two brand-new parents.

Parents who after 9 years of trying had been blessed with their first child. Parents who felt scared, but determined in their new role.”

The outpouring of love from that flight, brought on by the actions of two thoughtfully observant flight attendants… it exceeds my ability to describe what it meant to us. How much those wings and written notes uplifted two new parents determined to love their new daughter. /12

“I hope you’ll take time to share what is good. In a world of turmoil, don’t forget to showcase the Bobby’s and Jenny’s, the kind strangers out there.”

Thank you all for the love you've shown us ?. We only wish we could sit down with each of you, tell you the rest of the story, and hear yours. Maybe another time…

In a photo Dustin posted at the end of the thread, a photo album shows the sweet, funny notes passengers wrote to the new parents.

Just when they were feeling their most vulnerable, carrying their precious daughter halfway across the country, a plane-full of strangers gave them strength and the renewed hope that everything was going to work out fine.

If this doesn’t warm your heart, I don’t know what will!