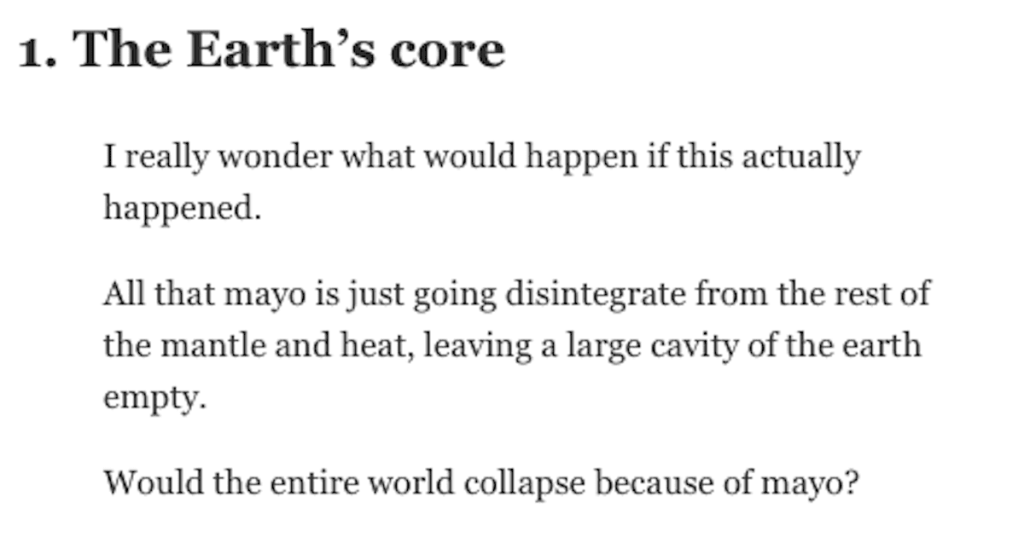 As popular as Marvel movies are, there’s one complaint that people keep having: the villains just aren’t interesting enough.

Now, I’m no superhero writer but I would like to humbly suggest the villain of Mayo Man.

His evil power? This:

You are allowed to replace any substance with mayo. What do you pick to cause the most chaos? from AskReddit

Here are some suggestions and reactions to how such a power could be best utilized to cause chaos, because, Reddit.

I really wonder what would happen if this actually happened.

All that mayo is just going disintegrate from the rest of the mantle and heat, leaving a large cavity of the earth empty.

Would the entire world collapse because of mayo?

Priests just slinging mayo in the face of patrons would be hilarious.

I feel like someone’s already running the beta on this now with Birds.

no more baked things or chocolate or ice cream… There would be riots immediately.

Dude, I need my fix of Hellman’s, where is it?

Mmmm, white creamy c**p in your c**arette will help me and millions of others quit.

A ton of skyscrapers and other buildings would just fall down.

It wouldn’t cause chaos, but I will gladly miss the point of this thread if it means that I can turn that b**ch into mayonnaise.

Fries with mayo and mayo?

It wouldn’t probably create lots of mayhem but the thought of it is slightly funny to me.

Hear me out, only transform the inside of the Marshmallow to Mayo.

A bit more of a surprise for people

13. All ink used to make the letter E

It would at least throw English-speaking countries into confusion, and create conspiracy theories and cults for decades to come.

14. Every radioactive substance in Chernobyl

Maybe the radiation will go down much faster there 2.

For a hot minute, people will think some dude just n**ted all over the place

Why stop there, turn all politicians to mayo

Imagine everyone walking around doin’ their thing and BAM!

Everyone’s naked and covered in mayo.

It would be…. interesting..

That tic-tock lady’s hair would be so moisturized.

Pedestrians on city sidewalks would be blessed by mayo descending from the heavens and every car would be a Jeep.

These days I bet that’s the most chaos per volume of replaced substance.

Every window, screen and windshield turned to Mayo in an instant.

Almost all electronics become unusable, concrete buildings falling to the ground, and the beaches, oh god the beaches.

Let alone the mayhem under the sea! It’s perfect!

Society would collapse within minutes.

There would be a tremendous GLOSH and many people would immediately drown and get banged around by building materials and furniture in the gloppy mayo madness.

I’m gonna puke just thinking of that. Everything everywhere would be so f**king greasy.

Imagine the snow, or Antarctica, the inuits would live inside mayo.

But only the blood that is outside of a body.

So, as soon as it leaves the body, it’s suddenly mayo. Imagine frantic scientists and doctors trying to explain that and ensuing panic of most people.

Somewhat unrelated, but dungeons and dragons has a magic item that can spawn various liquids.

Things like oil and acid, but for some inexplicable reason – Mayo.

I really want to hear the tales of all the heroes that saved the day with their never ending supply of Mayo.

All that peach fuzz just a thin layer of mayo slime.

Now would it be there permanently or could you wipe it off? Or would it ‘regrow’ in place of hairs.

The mass will be there, and assuming this replacement doesn’t get rid of all the stored thermal energy you’ll have enough energy to at least support hydrogen fusion in the core, however mayo consists of a lot of organic compounds.

These compounds would quickly break up in the core, and the hydrogen would likely able to fuse, but the carbon, oxygen, and nitrogen will all be inert.

This will significantly shorten the stars lifespan, as this extremely large core of inert materials will form a dead core and push the star into its dying phases.

Honestly, you can just replace all the Miracle Whip in the universe with nothing cause that stuff has gotta go.

What would you do with this superpower?