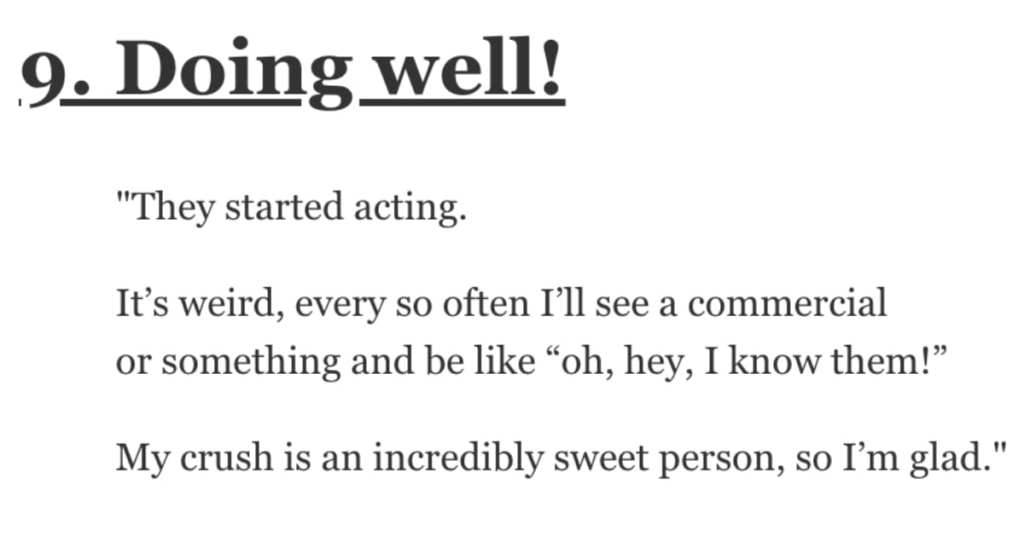 How Did Your High School Crush Turn Out as an Adult? Here’s What People Said.

Oh, to travel back in time to high school with the knowledge I’d have now so I could impress my crush…

Actually, come to think of it, I’d still probably blow it and she’d ignore me.

What happened to your high school crush?

“I remember walking up to her and asking if we could talk in private, and she said you can say what you need in front of everyone (her group of friends were all around).

So I asked if she wanted to go on a date. She burst out laughing and said “yeah, Um no..”

Looked her up last year and she’s a cage fighter now. What?”

“I had two unrealized crushes in high school.

One is a teacher and musician. She is married and has either one or two kids. We’ve kept in loose contact via social media and ran into each other at a NYE party shortly before she got married. I was introduced to her now-husband as ‘favorite ex ever.’ He seemed like a decent dude and I’m happy for her.

I believe the other became a US Attorney. I have not heard from her since google+ almost became a social media thing. I imagine she’s still very productive and would be disappointed in my life choices.”

“He’s an attractive gay man. I am none of those things.

He was my first serious crush and my first slow dance at a middle school dance. Now he’s gay, attractive, was in the military, and now own a photography studio.

He does some great headshots.”

We got married 5 years ago.

We used to go to the same punk shows, that’s where we met.”

“Mine was my best friend. She turned out to be a ped*phile.

She always liked younger guys…like when she was 17 she had a 13 year old boyfriend which was weird…but we were kids and I didn’t think about it much.

Turns out she continued to like younger teens as she grew into her 20s and 30s.”

“Found her on Tinder, she said I was hot.

Pointed out that I was that loser she used to know in high school. Had a big laugh.

Been a little over a year, now we send each other memes and hang out occasionally when the pandemic isn’t being a b*tch.”

“He had a rollercoaster of a life.

I admire him more than ever, and more than most people I know, but can’t wrap my head around why I ever found him physically attractive. Maybe it was always just his heart.

By age 25, he had a PhD, a wife, and was a captain in the Navy. By 30, he had two PhDs, a small business where he made a metric *ss-ton of money, and his wife was pregnant.

By 31 he was diagnosed with stage-4 skin cancer that swiftly spread to his lymph nodes, bones, esophagus, and a few other places. He was told he had minimal chance of making it 5 more years. Even with the best health insurance money can buy, it still basically wiped him out.

Seven years later, he’s living a comfortable but not extravagant life as a civilian contractor for the navy, same wife and two happy healthy kids, and spends most of his free time advocating for better public health care.”

“She’s still hot, successful and wealthy entrepreneur, and married someone with the same first name as me and who quit his job to brew beer.

I crushed on her for a bit, didn’t think she was interested so I dated others, then come to find out she crushed on me senior year, I was too dumb and blind, we connected freshman year of college, she wrote me letters, and by the time I wised up she had moved on.

No one to blame but myself.”

It’s weird, every so often I’ll see a commercial or something and be like “oh, hey, I know them!”

My crush is an incredibly sweet person, so I’m glad.”

“They both ended up as great guys.

One has a huge family and is a minister. The other only has one child and is a college professor. Both married nice people and are happy. They were really good guys in high school and ended up being really good adults.

I’ve got both of them on Facebook and we keep in touch peripherally as we stayed friends over the years.”

Our first marriages didn’t work out and we reconnected after our divorces.

If only I would have confessed I had a crush on him in high school, might have saved myself a lot of trouble… Lol.”

“He’s doing good for himself!

He’s grown emotionally, has a seemingly healthy relationship with a longtime girlfriend, and is working healthfully on all his career and personal goals.”

“My first high school crush who sat next to me in freshman year English was a really cute punk rock girl.

She’s gone on to become an incredibly hot fitness model.”

Do you know what happened to your high school crush?