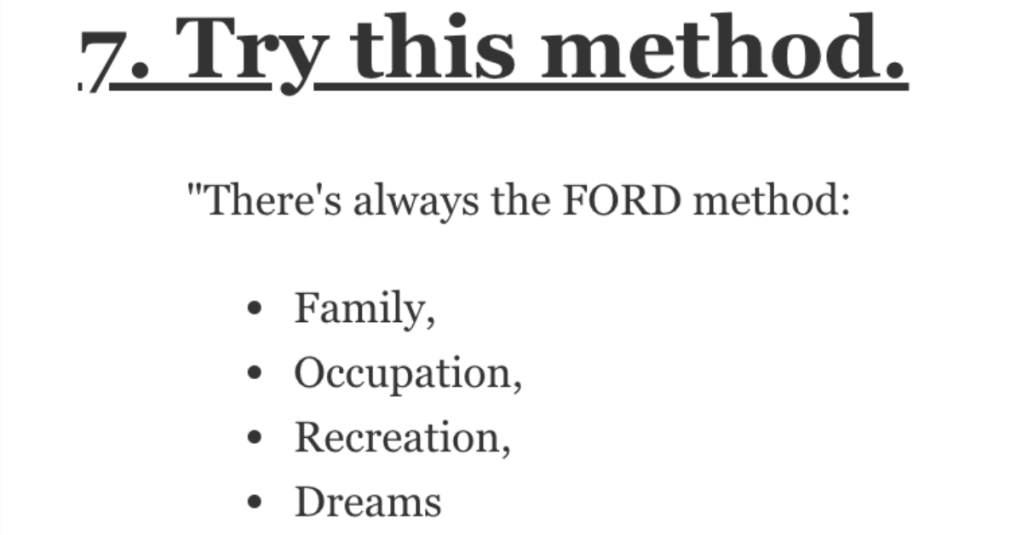 How Do You Avoid Awkward Silence in Conversations? People Responded.

I think a lot of us could probably use some pointers when it comes to making conversation.

Even if you think you got it all figured out and you’d never feel weird when talking to someone, chances are you’ll hit an awkward silence at some point.

So how do you get around those roadblocks?

Folks on AskReddit shared their thoughts about this.

“Crack jokes, so instead of silence, it’s laughing. and while you’re laughing, quickly think of what you want to say after.”

“Ask the person questions about their hobbies, job and family.

People tend to enjoy talking to those points.”

“Have a news app on your phone that sends you a notification about the latest event.

I have one pop up every morning and if there’s awkward silence it’s always “did you hear what’s going on today with such and such?”.

I also enjoy the read in the morning which is nice.”

“Honestly depends on the situation. Is it work, is it date, is it something else.

But try to read the room when it comes to people. Keep up the pace in something thats okay for both of you.

Too much over the top talking just to talk can also be awkward.”

“Only ask questions that you’re actually interested in hearing the answer to or that you know the subject matter enough to keep the conversation going if that’s what you’re wanting.

Obviously, the more interested YOU are the more the conversation will just seem to flow.”

“Avoid awkward silence during a conversation by f**ting.

That will distract from the long pause in conversation and provide a new topic of conversation.”

Just be careful not to come off as disingenuous.”

I had a situation at school this week where we had to bring someone in and my person bailed last minute so I had to post online and find a stranger to come in with me. We provide a service that people would need or want.

So I have this stranger come in and I don’t know anything about him except his name. Anytime there was a long pause I would just ask him about himself. What does he like to do? Had he done anything he was proud of during quarantine. How is he feeling with the shut downs. How is his work affected. After learning where he works just asking more questions about his work.

With friends I do the same. Ask follow up questions to things they have said. There is always more that can be explained. Eventually they’ll say something you can relate to or have something of your own to share.

Do you read about things that are interesting to you? Ask them have you heard (and then tell them about something you read or saw on the news). Do you like a certain show or video game? Do they?

MOST important: don’t rapid fire questions. Let them naturally connect. Use what they said to either comment or ask for more information. If you’re jumping from question to unrelated question it’s going to come off really impersonal.

At worst it will seem like you’re trying to control the conversation and avoid talking about yourself.”

“In college I had a professor that would play music quietly when we had to form groups with new people.

This way when no one was talking it didn’t feel like awkward silence.

I would recommend this to anyone that has a group of people that are meeting for the first time.”

“”Any big plans for the weekend?”

“The trick I have learned as a lifelong introvert is that people *love* talking about themselves. For example, if they said they come from city X or country Y, you can ask them if they love living there and if yes, what do they prefer?

If not, why not, or where would they prefer living? If you can find their passion (whether it’s binge watching Netflix series, making tiny glass vases for their hamsters, or going to country music festivals), you’ll be golden.

Even if it’s not something that you yourself find interesting, you can fake it by making appropriate comments and asking follow-up questions (how did you get into that? what’s your favourite series/technique/artist? what’s your next project?). Remember, this is about learning about them, not coming up with the most savvy reply, so actually listen to what they say.

Alternatively, an awkward silence can be a great point to cut the conversation short and leave, if that’s what you want to do.”

“It’s all about the open-ended questions.

Avoid questions that can be answered with Yes/No or short phrases.”

“Try talking about something trendy or current affairs, but non controversial with a one liner opinion, like:

1. Suez Canal, god knows when it be open again.

2. Bitcoin, I think I missed that bus.

For example, ask who he or she listens to or what genre of films is her favorite.

Great tension breaker, and you know who is cool and isn’t.

The fun ones giggle, the miserable sods pretend it isn’t funny.”

“Everyone loves to be complimented like their hair or their shirt and then you can ask them where they got their outfit and the conversation usually flows pretty well from there.”

“My teacher gave this advice in 6th grade.

“Never ask yes or no questions.

Always open ended to give the speaker room to talk.

Example: If you could take a month vacation right now, where would your top 3 spots be, who would you bring to each destination and why?”

“If it’s a new person, find some baseline information. I recommend the acronym FORK.

Family. Most people have something to say about family good or bad.

Recreation. Ask about hobbies, entertainment whatever. Just what they do in their spare time.

Knowledge. Ask em if there’s anything they know a lot about (usually something mentioned in an earlier topic like what they do at their job, what’s it like living at their home town, etc.). I’ve had some DEEP conversations about space, religion, movies etc. from this one. It’s great. Real great.

If they’re someone you already know, you can still go through those steps just pick more advanced questions (how’s your sister doing? Does work suck during the pandemic? You ever finish that movie series? Remember when we had that deep conversation about the expansion of the universe and God? That was crazy!).”

“Depending on how well you know the person, I like to tell them about any wild dream I had last night.

Leaves it open for them to tell you if they had a wicked dream too, and then you end up talking about all sorts!”

“What do you miss the most about pre-Covid life?

Most people (today) would definitely have a great response.”

“The best way to avoid awkward silences is to get comfortable with the silence.

It’s much more awkward to try and come up with something to say when you have nothing to say than it is to to say nothing at all.”

“Having things you are passionate about helps. As for drawing things out of others a couple of easy tricks is to:

Ask questions to others, people like to talk about themselves.

Once someone tells you about themselves find common ground. They grew up in another state, whoa I’ve never been there, how was the weather. Schools. Football team.

Whatever just keep the convo going and find something else to remark or tell a personal story on. People love when you share personal stories as well. Not like, I’m so awesome story, but stories that show emotion or feelings. Let’s people know they can trust you

Anyhow, just start talking to people and you will learn how to talk to anyone in whatever situation you find yourself and not over think it.

Also, you stop caring as you age and don’t worry, what if I say something they think is stupid.”

How do you think people can avoid awkward silence?