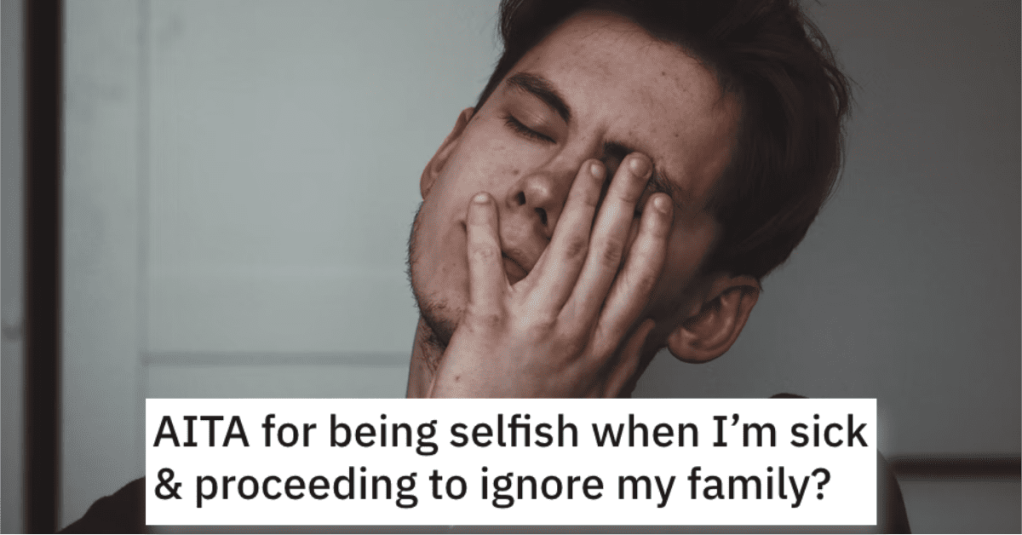 Is This Person Wrong for Being Selfish and Ignoring Their Family While They’re Sick? Here’s What Folks Said.

I don’t know about you, but when I’m sick, I want to be ALONE.

Some people want to be taken care of and they want some attention, but I prefer to be off on my own…but soup drop-offs are always appreciated, just FYI…

Anyway, a person shared their story on Reddit’s “Am I the A**hole?” page and they want to know if they are being a jerk for ignoring their family when they were sick.

AITA for being selfish when I’m sick & proceeding to ignore my family?

“Background: When I was ten, I was diagnosed with an illness doctors said would eventually take my life. I’m now in my early twenties and I don’t think I’m one with the world for too much longer now.

Four weeks ago was my birthday and my mother asked me what I wanted to do to celebrate. Even though I can’t participate now, I always had fond memories of going bowling with my siblings and cousins so I said I’d like to go to the local bowling alley.

When I get there, the mood is somber. No one is bowling and people are mostly just talking in hushed voices. I cannot try to bowl to get everyone started and I’m stuck watching.

An hour or so in, my closest cousin says he wants to play the arcade games and I ask to go with him. I watch him play pac-man for a while before he says, “I know you use humor to cope, but this was a little sick even for you.” I asked him what he meant and he realized I had no idea of what he was talking about.

Apparently, my mother made a big stink of this being my “last birthday” with everyone. It said that on the invite. Last birthday. Last year of life. I was furious and heartbroken. It’s why everyone was so sad.

I have my cousin bring me back out and take me to my mom. She’s crying with her sister and mom still. I tell her I want to leave and she says, “The reservation is for four more hours, and we still have cake.” I repeat myself and my aunt says, “Stop making everything about you for once. She’s grieving.”

I say, “It is all about me, I’m the one dying.” I’m yelling at this point and my mom cries harder. My dad drops me off at my facility and he doesn’t comment on what happened. He just hugs me and goes.

My phone is blowing up after and people are mad at me until my cousin says I didn’t know. I haven’t talked to anyone but my cousin since then. My nurse says I’m being stubborn but I wanted one more good thing before I’m too sick to enjoy any bit of it.

AITA for being selfish when I’m sick & proceeding to ignore my family?”

Now let’s see what folks on Reddit had to say about this.

This reader said this person is definitely NTA. 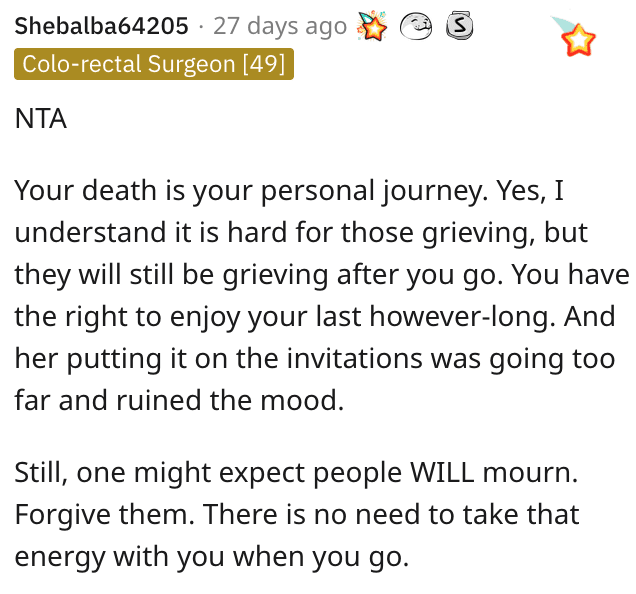 And another individual agreed and said that it should be all about this person and NOT all about his mother. 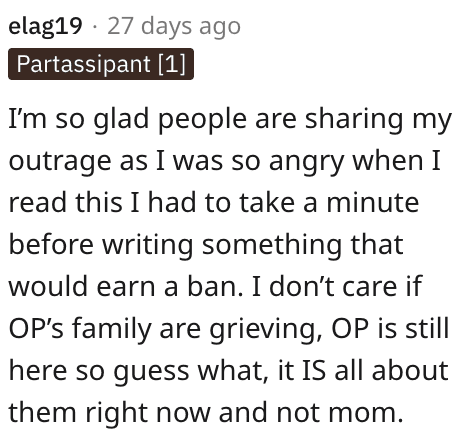 And this Reddit user said that putting that info on the invitation was definitely a bad move. 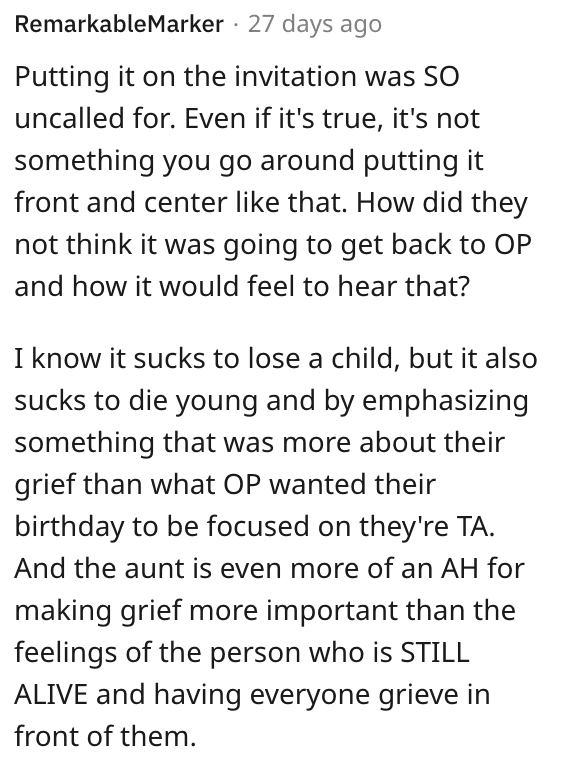 Spill your guts in the comments.