Is This Woman Bad For Wanting Biological Father To Pay Child Support But Not Seeing Him?

Whenever people split up, things get complicated.

Add kids into the mix, and things get even more complicated.

And those complications last for years and years…

Take a look at this story from Reddit’s “Am I the A**hole?” page from a young woman who has a very unusual situation she wants to vent about.

AITA for not wanting to interact with my biological father but still expecting him to pay child support?

“First off let me apologize for any weird phrases or grammar mistakes in my post, English isn’t my first language and I’m not that good with translating courtroom terms and words.

I (18F) was raised by a single mom. My parents divorced when I was just two months old and my mom got full custody of me, so I never met my father. All I’ve ever really known about him is his name and the amount of child support money he transferred into my bank account each month.

Now, in my country, a noncustodial parent is obligated to pay child support up until their child turns 18, but this can be extended for a few more years on the condition that said child decides to pursue a higher education and go to university.

So as you can already guess, as soon as I turned 18 my father stopped paying child support. But when I graduated high school and got accepted into a university, I decided to use this extended child support law to my advantage and took him to court. Me and my mom weren’t doing all that well financially and I thought the extra money would definitely come in handy.

The case took quite a few months to get resolved, and the courtroom was the first and last place where I saw my father in person. His reasoning for not wanting to continue paying child support after I turned 18 was that I didn’t want to have any sort of relationship with him, so he didn’t want to send money to a complete stranger each month anymore.

He told the judge he’d agree to continue paying child support on the condition that I agreed to get to know him and talk to him on a regular basis, but I declined. I mean, even if biologically he’s my father, this man is nothing more than a stranger to me.

I ended up winning the case, because the law is very clear on the fact that he has to pay child support for as long as I’m in university, regardless of whether I want to actually interact with him or not.

Now he has to pay child support every month up until I graduate from university. We ended up getting in a huge argument as soon as the last court hearing was over, and he was really upset because I didn’t even want to talk to him for a while and give him a chance but still wanted to “prey on his money”.

I should also add that my father never made any attempts to pursue a relationship with me while I was growing up, and neither did I. My mom never actively tried to get me to meet him, but at the same time she made it clear that she was always open to talk if I wanted to know more about him and ready to answer any questions that I might’ve had.

Except that, well, I never really had any questions to ask her and was never really interested in him. She also never badmouthed my father and never tried to stop us from meeting each other, but neither of us ever made any sort of attempt to do so. 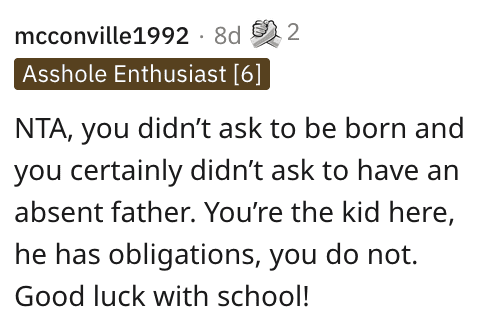 Another person said that the father had 18 years to do something about this situation and he never did. 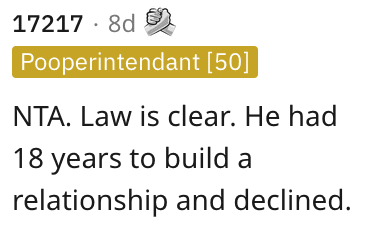 Another individual said this guy waited way too long and he blew his chance. This young woman doesn’t owe him anything. 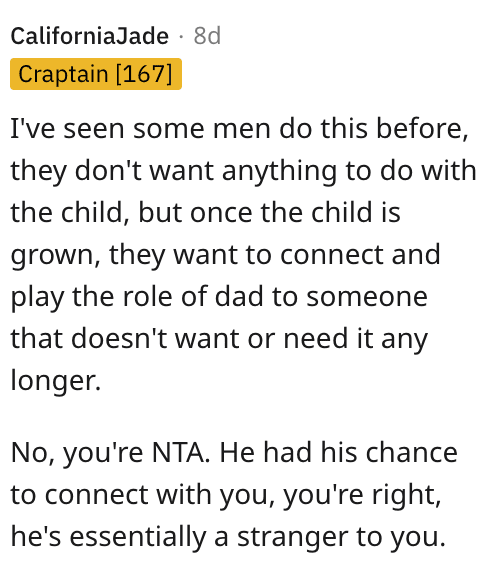 And lastly, this reader had the complete opposite opinion: they said this young woman is the a**hole and that it would be wrong to take his money but totally shut him out 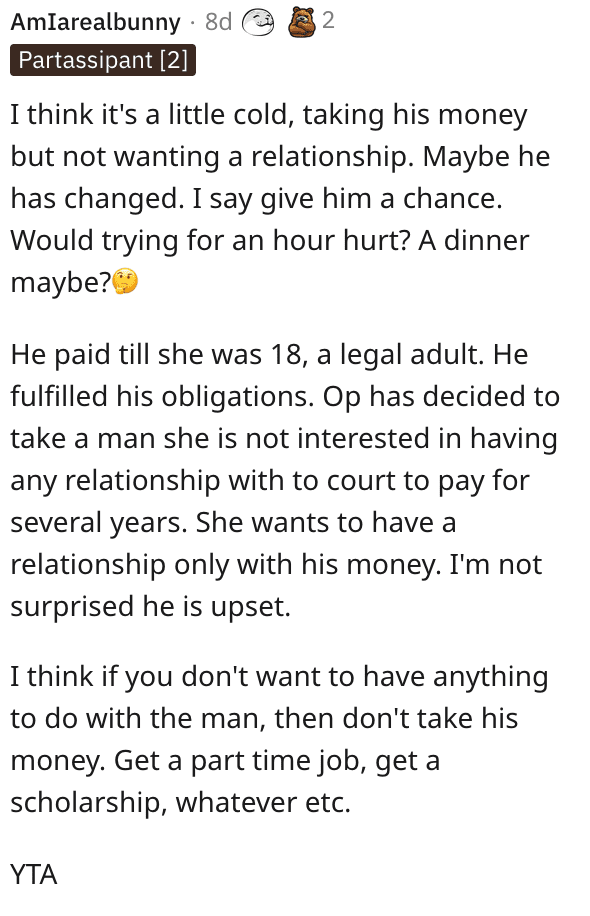 Do you think this young woman is acting like an a**hole?