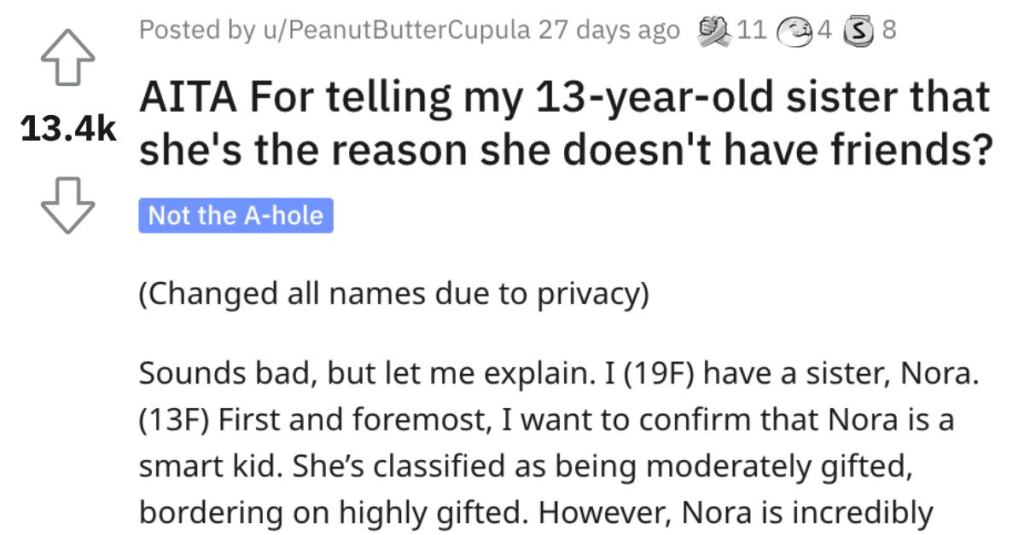 Is This Woman Wrong for Telling Her Sister Why She Doesn’t Have Any Friends? People Responded.

The truth hurts, doesn’t it?

And when someone throws it in your face, it can REALLY hurt.

And that brings us to today’s “Am I the A**hole?” story from Reddit.

Did this woman go too far when she told her young sister why she doesn’t have any friends?

AITA For telling my 13-year-old sister that she’s the reason she doesn’t have friends?

She’s classified as being moderately gifted, bordering on highly gifted. However, Nora is incredibly arrogant and egotistical. She claims that other people are “intellectually inferior” and that they are, essentially, too stupid for her to associate with. She would make similar comments about me until I got admitted to a selective university and began studying a “smart” major (Accounting.)

This isn’t just a problem with family members. The school constantly requests parent meetings because Nora will be rude to other students and refuse to socialize with them for class activities. Whenever they come back from the meetings, our parents will complain how the school “doesn’t understand” Nora and “is trying to drag her down with the average kids.” They’ll pretty much reassure Nora every time that she shouldn’t have to “hold herself back.”

I don’t have any classes on Fridays, so my parents ask me to pick up Nora from school since they work and they don’t want her taking the bus due to covid concerns. Before I even get out of the parking lot, Nora starts to complain about “being stuck” with this kid for a Spanish group project. They were meant to split into pairs and practice the new vocabulary by writing out a minute-long skit and acting it out for the class.

The boy Nora got paired with, Ike, was dyslexic and had trouble reading the script. Nora had outright called Ike “stupid” and said how he was “just making excuses” and “not trying hard enough.” She kept ranting even when I would ask her politely to be quiet because I needed to focus on making certain turns.

Nora complained how they had the option to pick a friend, but how her “underqualified” teacher had to put her with Ike because “no one in her class is intelligent enough to keep up with her.”

I had gotten to a red light, so I turned around and told her something pretty close to, “Nora, you aren’t friendless because everyone else is “intellectually inferior,” you’re friendless because of your nasty attitude. You may think you’re the smartest kid in the room, but you won’t go anywhere in life until you learn to treat people with respect, much less make friends.” Something I’ve wanted to tell Nora for a very long time. My sister was stunned and was completely silent for the rest of the car ride.

After dinner, once my parents were home and Nora was in her room, my parents basically laid into me for what I told Nora. They said how I was basically bullying Nora and telling her how she should “hold herself back when she’s exceptional.” I told my parents that I wouldn’t say anything like that again, but I still feel what I said was necessary.

Wow…now check out what Reddit users said about this.

One reader said that this kid needed a reality check. 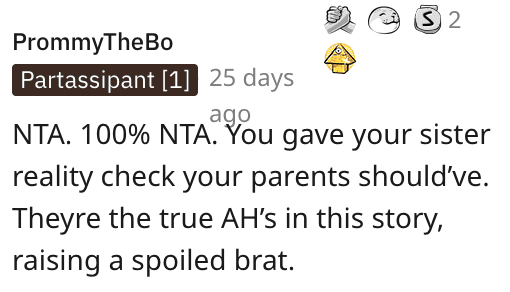 And another Reddit user said that the younger sister is in for a rude awakening in life. 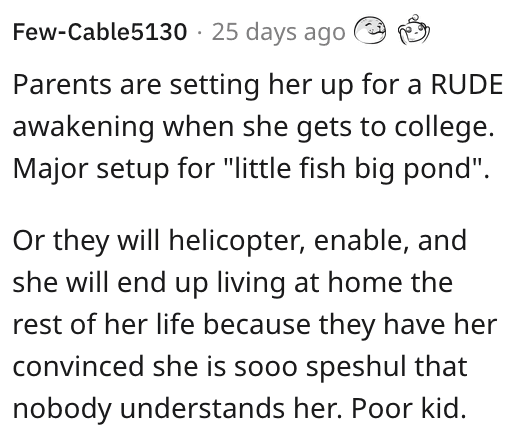 And this individual made a very good point about kids that are constantly told they are gifted. 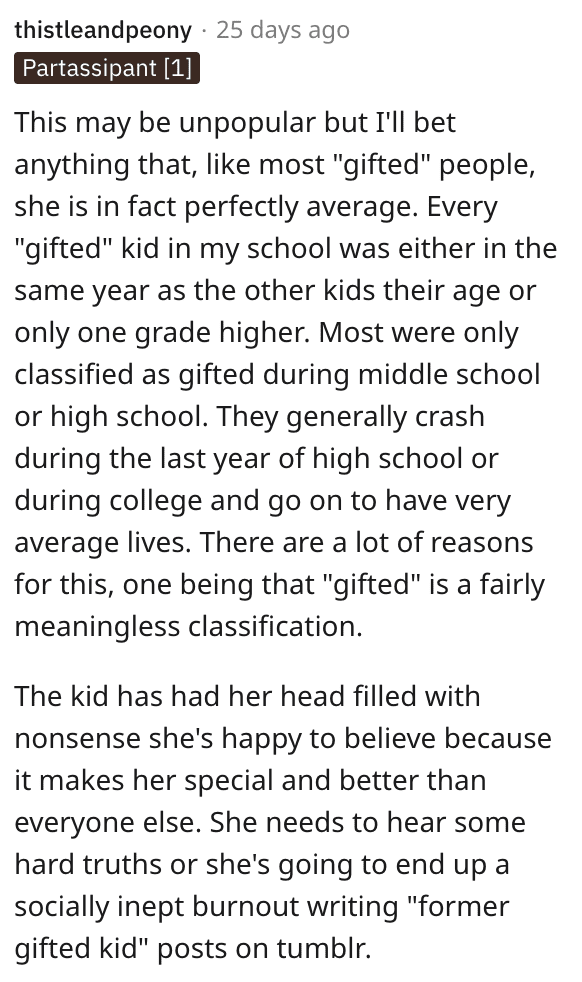 Now it’s your turn to sound off.