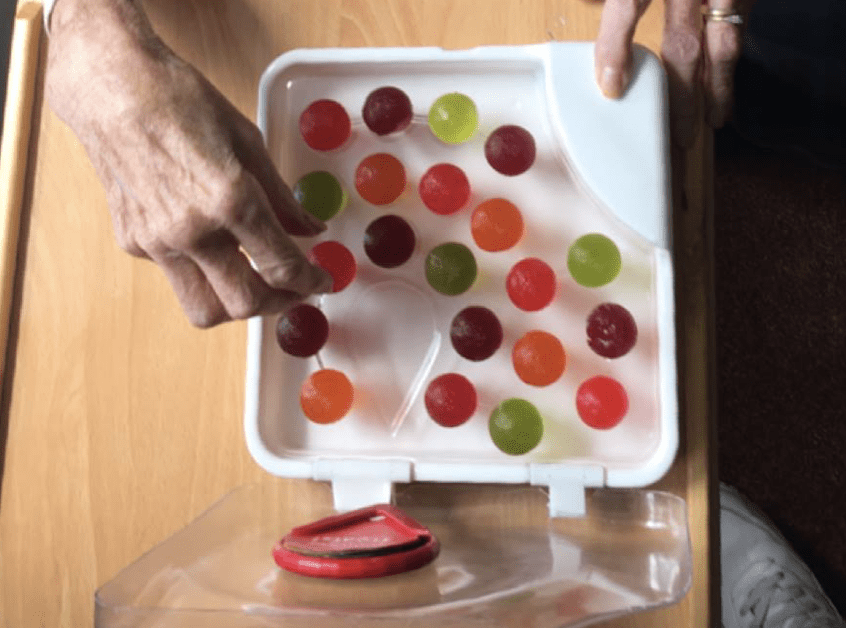 Dehydration in Alzheimer’s and Dementia patients is a common problem. In some cases, it can be difficult for caregivers to spot symptoms of dehydration. And even if they do, some patients have difficulty swallowing, otherwise known as dysphagia. In this case, patients are given water-laden foods such as popsicles and fruit.

One young man, Lewis Hornby, experienced this first hand. As a caretaker for his ailing grandmother, he fought to understand better ways to provide her water and hydration. Like most entrepreneurs, Hornby attacked this issue head-on, in hopes he could alleviate his grandmother’s suffering and allow her a longer life. He took up learning about sensory deprivation tools, talking extensively to doctors, and even lived in a senior living home temporarily to gain a better understanding of this avoidable issue.

After consulting several doctors on his initial prototypes, he was able to test his “Jelly Drops” on patients.

“For people with dementia the symptoms of dehydration are often mistakenly attributed to their underlying condition, meaning it can easily go unnoticed until it becomes life-threatening.

About a year ago my grandma was unexpectedly rushed to hospital, she was found to be severely dehydrated. Thankfully, after 24 hours on IV fluids she was back to her normal happy self, and is still enjoying a good quality of life to this day.”

Jelly Drops, made up of 90% water, are small pods surrounded by an edible jelly-like substance. They ‘re brightly colored and attractive to patients. These small pods make ingesting water easier and the coating is made of electrolytes!

The beautiful thing is the packaging. They are in a non-medical box to appear less threatening, as well as a clear top for easy spotting. This allows patients to find and access the Drops easily. And it doesn’t hurt that they look like sweet candies!

But how well do they work?

Check out this video or Hornby’s grandmother:

“When first offered, grandma ate 7 Jelly Drops in just 10 minutes, the equivalent to a cup full of water, something that would usually take hours and require much more assistance.”

Currently, this product is being trialed in the UK and Hornby hopes that production will start soon.

He also hopes that his invention provides a safe, long life for patients.