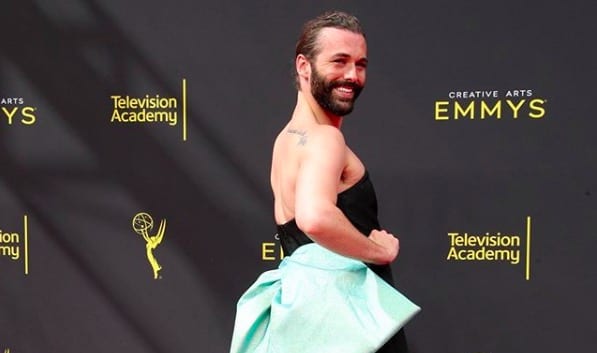 The non-binary grooming expert turned up for the Creative Art Emmys in a dress that takes “business in the front, party in the back” to a whole new level.

From the front, Jonathan’s dress appeared to be a classic little black dress, strapless and short. In the back, there was a bright blue gown-like train with a huge bow on it. As he captioned one photo: “Put a bow on that a**.”

Put a bow on that ass. gown @csiriano styled by @alibstyle HMU by me & @pattymacaker

The dress was designed by Christian Siriano. Jonathan finished the look with platform peep-toe boots.

Family’s all here at the Emmys ?️‍?

In one endearing moment from the evening, co-star Tan France helped Jonathan adjust his train on the red carpet.

The Fab Five was reduced to a fab foursome at the Primetime Emmy Awards. Jonathan didn’t attend that ceremony—he instead took some time off to rest before heading off on tour to promote his new book, Over the Top: A Raw Journey to Self-Love.

Their friendship & support teaches me so much. To ask for help, they affirm me in all the ways friends should, and they’ve also taught me that I can trust them. Through all the ups, downs, happy times, privately stressful times we always are there. Thanks so much to everyone involved with Queer Eye especially our crew, producers, pre and post production, ITV & Netflix and my whole team THANK YOU! ?️‍?? ⭐️2X Outstanding Structured Reality Program ⭐️

“Taking the next few days to rest up, spend time w my bittens and mom before the book tour get going. I know it’s going to be a lot of hard work but I’m ready.”