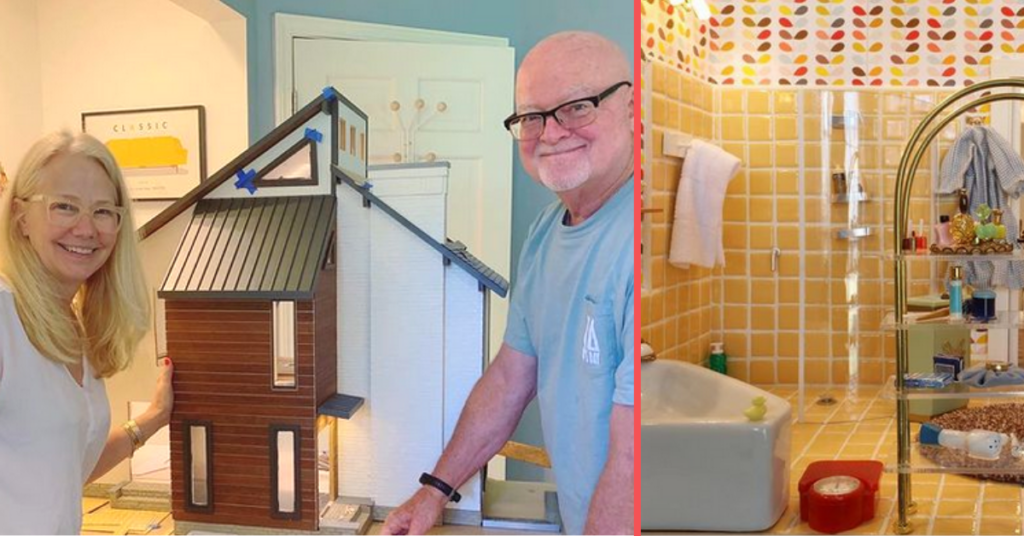 Building tiny rooms seems to be a new trend.

I frequently get ads for the adorable little kits that you can buy, but I know myself, and while I love Lego, I don’t think I could handle the minute detail that goes into miniature construction.

The same can’t be said for Annie Kampfe and her husband Cliff Donnelly, who took the concept of crafting a miniature room to a whole new level.

Beginning their adventure in 2017, the couple from Leawood, Kansas were a bit ahead of the trend with their miniature project, building not just a room, but an entire house.

This ten room project, complete with electricity and a finished basement, was meticulously crafted and styled to be like the homes of their youth.

When interviewed by My Modern Met, Annie explained the origins of their project.

“I was inspired by a little needlepoint rug. I thought I could use it for a pin cushion, but I was told it was actually a doll house rug.

It immediately sparked my creativity, and as a former interior designer I loved the idea of creating an upscale doll house.”

And so began a project so detailed that it’s almost hard to imagine.

The house has a Mad Men vibe in the ornate details and furnishings.

“The idea of being able to build something that resembled the style of my childhood home intrigued me.

I spent so much time finding the right pieces to put in the house.”

It’s kind of like The Sims but in 3D.

The tiny house has a super chill master bedroom:

And there’s a master bath that anyone would envy:

The living room even sports an open fireplace, with a painted brick facade that reminds me of my grandma’s house.

It was truly a nostalgia project, and the interior designer in Annie made sure that everyone would find something to feel nostalgic about.

There’s the colorful attic nursery that holds a tiny dollhouse within the dollhouse and bookcases on the wall filled with classics like Dr. Seuss!

And the bright breakfast nook that was recently decorated for Easter!

No detail was too small to include!

Here’s what the whole thing looks like–right down to the clever and jam-packed basement!

When the couple went viral, they probably had no idea that they were starting a trend, but they did.

After putting together a miniature room from a kit, author Megan Paasch decided to try an original, based on a room from her YA debut.

When asked about her new hobby, Paasch explained that she got the idea when Annie and Cliff’s son posted their house on Twitter.

“That house is gorgeous and is partly what inspired me to try making my own miniature from scratch.”

I really love this form of creativity, and knowing my own limits, I’m completely humbled by the artists who can do this so well.

What about you? Are you inspired to try your own miniature either from a kit or from scratch?

Tell us your thoughts in the comments.