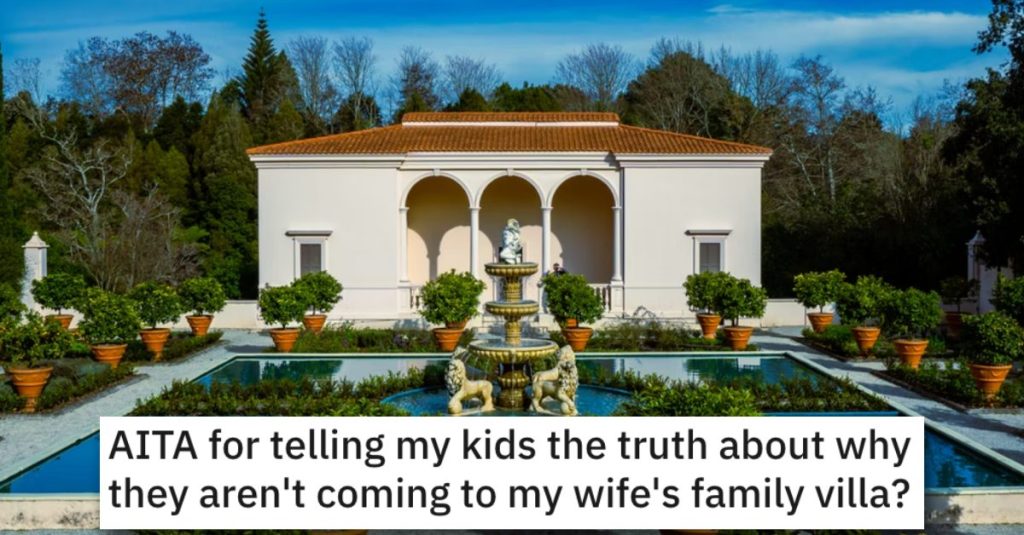 Sometimes when people get divorced and there are kids involved, things can get…complicated.

Check out this story from Reddit’s “Am I the A**hole?” page and see if you think this guy did the wrong thing when he told his kids the truth about why they aren’t coming on vacation with him.

AITA for telling my kids the truth about why they aren’t coming to my wife’s family villa?

“My ex-wife Lucy and I have 3 kids (16F twins and 10M), we divorced 9 years ago after the youngest was born because she came out as lesbian, no hard feelings.

I married my now wife Juli 5 years ago after dating for 2, we have 2 kids, (4M and 2F), Juli was a common friend during our marriage and almost as soon as we started to date, Lucy confessed that she had been in love with my wife for several years now and since Juli is straight and I formed a life with her, it stained our co-parenting and overall relationship.

Now thanks to that, she has make very difficult for me to have my kids during my breaks or in special occasions, if I want to do long holidays with them for a month or so, with some of our days trading, she says no. If I want to have them for my birthday, some random off days or my parents birthdays, she says no. It’s really difficult for me because I truly adore my kids and I want to spend as much time with them as I can.

My wife and I have to travel to Europe around June for a month and a half to care for her mother, my plan was to take my kids during this time because her parents own a villa close to a small town that looks, just like my daughters would say, ”magical and medieval”.

I’ve been there twice (for a week or less, as an emergency trip) and it does look like something that would appear in GOT, I know my kids would love it, Juli’s mother isn’t bedridden but we have to make sure she’s okay at all times, this can mean being at the villa with her teaching us some of their family traditions, or touring the surrounding towns, and with the European train, I can take them to France, Italy, etc.

As you can guess, Lucy said no and wasn’t willing to discuss it further, I had to tell my kids that I can’t take them and that maybe next time (I didn’t mentioned or involved my ex-wife) and they became bad at me, I endured it as much as I could, but when my son asked if I preferred my ”new family” over them and if Juli doesn’t like them anymore, it broke me and I said that I asked their mother if we could trade custody days so they could come with me, and she said no, I explained that it would make me AND JULI very happy if they could come, but that we can’t go against their mother wishes.

She called me yesterday and called me an AH for turning the kids against them because our son cried with her, she allowed me to take them and threw some passive-aggressive comments. But I’m confused, I don’t think I turned them against them, they’re confused and hurt so I said the truth.

This person said this guy is NTA and his ex is using their kids out of anger. 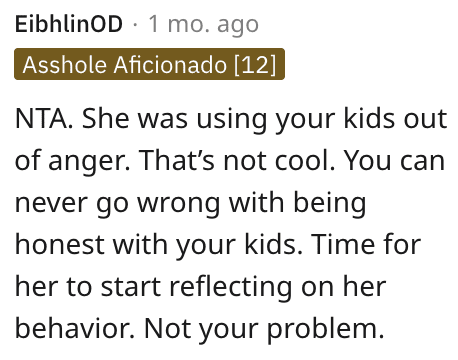 And this Reddit user agreed and said there’s no way this guy was the a**hole in this story. 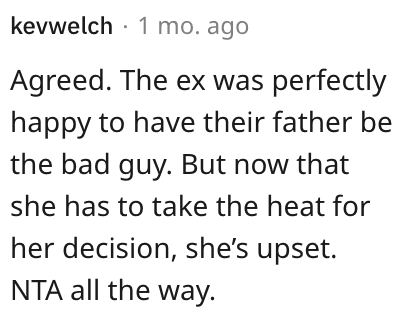 Another individual said this guy might want to hire a lawyer and think about re-negotiating his custody agreement with his ex. 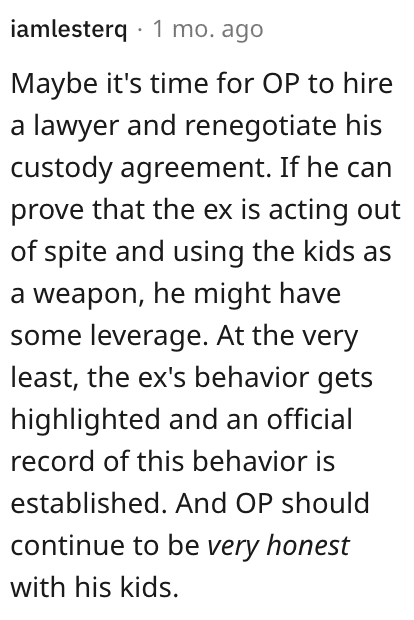