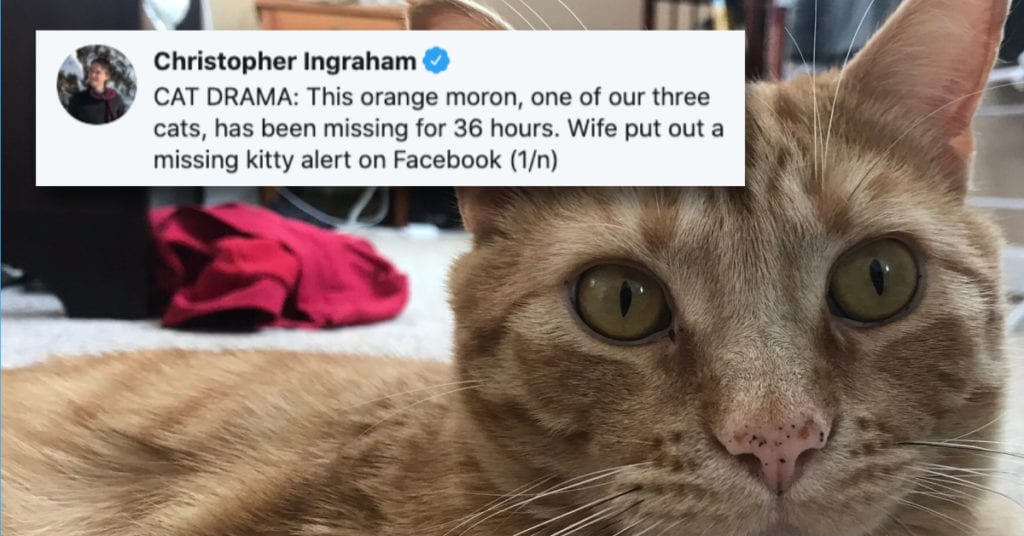 There’s really no worse feeling than the dread you feel deep in your soul when your pet escapes or doesn’t return home.

But sometimes, their escape story is actually pretty comical, as is this case with Christopher Ingraham’s “orange moron” of a cat.

He posted to Twitter explaining that his cat had been missing for 36 hours.

CAT DRAMA: This orange moron, one of our three cats, has been missing for 36 hours. Wife put out a missing kitty alert on Facebook (1/n) pic.twitter.com/QdXnhZaE68

But here’s where things really start to get spicy:

People were, apparently, talking about the Ingrahams’ missing cat at one of the local bars today

A man named Larry gets involved:

One of the bar regulars, an octogenarian named Larry, overhears the conversation. “Huh,” he says, “I got woken up at 3 AM by some wild animal knocking shit over in my house.”

He found a golden cat in his room:

He cornered the animal in his bedroom, where he found it trying to claw its way out of a window. Looked like “a golden cat,” he says. Mind you this is at 3 AM, and this is a guy who usually wakes up at 4 to go stock shelves at the local grocer’s.

But then he had to go to work:

The animal ran off and his in his house, however. After an hour of dicking around and failing to catch it, Larry says “fuck it, I’ve gotta get to work.” He leaves, with the mystery animal still in his house.

Later, though, he stops by the Ingrahams’ house to let them know about his encounter:

Later at the bar he puts two and two together, and comes down to our place to let us know. I trudge up the hill to Larry’s house, with three sub-five-year-old kids in tow because the wife is an hour away picking up her new eyeglasses

But he won’t let anyone in the house:

Larry won’t let us in the house. “I don’t let anybody in my house,” he says. Fine, he’s 80, still working, very nice dude, everyone in town loves him, he can live however the fuck he wants. We stand at the door and call for Ella. Ella doesn’t come.

Apparently Ella isn’t all that smart:

Whenever Ella disappears I always joke about how I hope he got hit by a car. He’s also a he, which whatever, when they’re kittens it’s impossible to tell

Meanwhile, Larry got some cat food:

Anyway the mystery “golden cat” which we *believe* to be Ella is still in Larry’s house as of this moment, has probably pooped and peed all over the place, Larry got some cat food to lure it out and says if he sees the animal again he’ll call me but the situation is still fluid

So I just went up there again? Larry says he’s seen no sign of a cat or other animal since getting home from work/the bar

What is Larry up to?!

Still no word from Larry, no idea what's going on? To be clear: I have no idea if this thread has a happy ending, or any ending at all!

He’s so laid back:

The thing is, Larry is very laid back. And it's easy to imagine the cat holed up under a bed and refusing to come out, and Larry just being like "well ok, we'll try again tomorrow," and calling it a night.

Ah ha! Ella was under the bed this whole time!

The nerve of this asshole. He was, indeed, holed up under Larry’s bed and only decided to emerge after lights out pic.twitter.com/0FPbcWaVEw

Of course, the cat was completely unphased:

Already back at the door, yowling to be let out again. Incorrigible. pic.twitter.com/t5E9rdiHl6

Aw, yay! We’re so glad this story had a happy ending after all. We were starting to get worried with how or whether this thread was ever going to end!

Do you have any crazy pet escape stories? Let’s hear ’em!