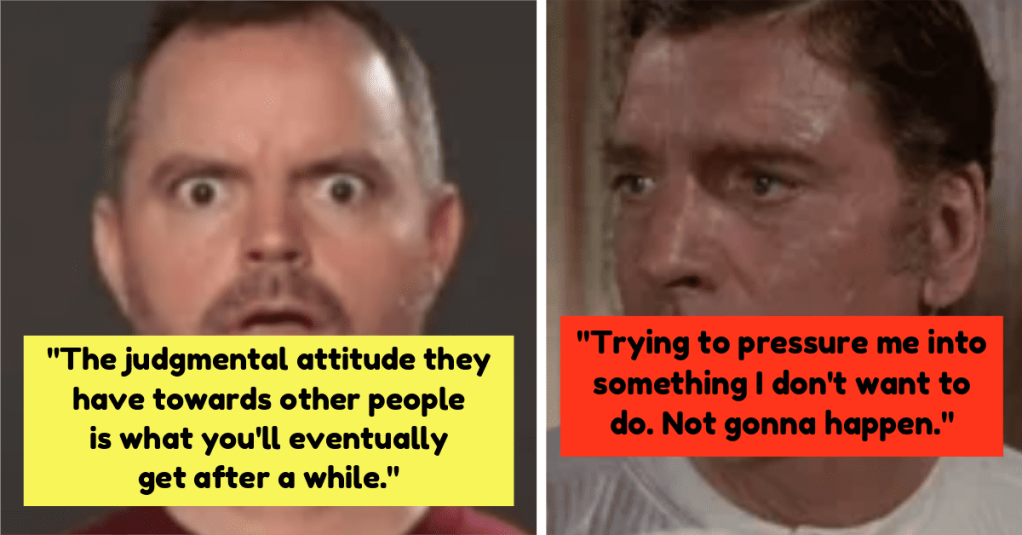 Men Talk About The Relationship Dealbreakers

It’s time to talk about dealbreakers. The things that, despite a bunch of other positive qualities, just force our hands into rejecting relationships.

We all have them. And one person on Reddit was very curious what men, specifically, had in their dealbreaker vault.

Men, what are some deal breakers for a potential relationship, even if they’re very attractive? from AskReddit

Some of these responses from Reddit may surprise you.

1. Being terrible with finance

Money is cited in the top 3 reasons for divorce, always. And money affects every facet of life.

My BIL married a gal who was always a next thing away from getting her financial s**t together. Anyway, he’s living with us now, after his 2-year marriage ended, because, it turns out, people who are bad with money and have no real interest in saving, likely will not change.

Trying to pressure me into something I don’t want to do.

And I hold honesty to a pretty high regard so any form of manipulation or toxic passive aggressiveness is over the line for me.

That overly judgemental, complaining attitude they have towards other people is what you will eventually get when you’ve been with them for a while.

It’s just what they are.

The whole mindset of “I’m the god’s gift to Earth, I don’t have to bring anything to the table, everyone wants me, I got options so I’m just going to treat you like an option and you better be happy about it or I’m going to label you insecure and tell all your friends and family.”

Quieting people by lightly hitting them.

The ‘accidental’ backhand. The Arm Pull. The hitting the table in front of the speaker repeatedly.

It all leads to behavior that stifles or quiets the other person. Once that becomes habit, the partner gets run all over all the time because they never feel like they can say their piece.

​Also anyone that acts like the loudest person should get their way.

well, in high school i was really into this one girl, and we would hang out a lot, and it started to get closer and closer to a full-on relationship.

we were driving to a mall, talking about things, and it came up that her dad told her if she ever brought a black guy home he’d disown her.

she stated that she would tell her kids, one day, the same thing.

i immediately lost all interest in her. she now is married with kids.

7. Cheating – in any direction

Hey if you cant have an open conversation with your current partner and end Things…. then you are not worthy and Belong to the streets.

You not Holding on to partners because they are a safety net.

Either work on your relationship or leave if you are not satisfied.

Having a cake and eat it too is super unattractive.

I’ve had dates with girls where they just showed that they weren’t really interested in compromise.

At first, I gave it a chance, but it always ended up being bad within a couple of months.

Looking for a partnership not a free loader.

Would like to say that the money isn’t the issue, it’s the poor work ethic, someone could work part time at any job and do more in the household.

I could work less and do more in the house etc, it doesn’t really matter as long as there’s a similar work ethic.

I’m not yours, you’re not mine.

We chose to share our lives together and we have to make that choice again every day.

Let’s build a project together, but we each still have our own individual projects to balance.

Has every form of anxiety known to man

No sense of humor

12. No respect for boundaries

I learned this lesson the hard way once, I’ve got no intention of letting it happen again.

“Tests” and indirect behavior. If you want something tell me. I’m not playing a game just to see if I’m “worth” your attention.

You don’t treat the things I care about or respect seriously. It shows me you won’t even put in the effort to act like you care.

The idea of “I don’t have to bring anything to the table and you have to bring everything”. If you’re a deadbeat leech I’m not interested in wasting my time on you.

If they breathe their politics too loudly. I’m fully open to someone who doesn’t perfectly align to my idea of a worldview but if they’re super loud about it that looks incredibly cringy and tactless. I don’t care if it’s for something I agree with or not. There’s more to life than mindless tribalism.

14. Getting the third degree

Huge red flag when they ask you for every little detail when you’ve been somewhere without them i.e out with friends or something, and basically accusing you of cheating then getting overly defensive and secretive (showing really strong cheater signs) themselves

I dated a girl in college that broke up with me, then got super mad at me and blew up my messages a few weeks later because it wasn’t supposed to be a “real” break up.

It was a test to see if I cared enough to fight for her and try to win her back and I broke her heart by not doing that when she broke up with me.

Lmao someone had been watching too many rom coms and found out real quick the real world doesn’t work that way. If you break up with someone don’t be surprised if they do the adult thing, leave you in the rear view, and move on with their lives.

16. No arguments, all fights

If you can’t have a civilized argument with them.

If small differences at the start of the relationship already turn into screaming, shouting, insulting etc. just think about how those important discussions later in the relationship will go…

Also, if they can’t keep a secret.

18. Talking s**t about everybody

When I was preparing for prom I randomly had to spend some time with this girl I’ve never met before and never met after. She was attractive, sounded like a right mix of intelligent and funny. But godd**n, the ammount of s**t she talked about her partner that I was supposed to replace that day. And then the s**t she dumped on a teacher who was supervising us. All in about an hour or so, speaking to a complete stranger.

But to me she was all nice. Even after I told her that I’m now afraid of turning my back to her because of all the s**t she’d dump on me all I got was as smile. What the h**l?

Met this girl in college, nice personality, smoking hot body, invited her over to my dorm for some Netflix n’ Chill and quickly noticed she had a…how to put it delicately…a severe BO problem, I’m talking rank and when she took her shoes off it was worse than some of the guys I use to play basketball with.

Ok, not a deal breaker, maybe she just had a long day and hadn’t had a chance to take a shower, happens to all of us.

So we got together a few more times and if anything it got worse, so I tried dropping some subtle hints. She finally told me she was into something called “natural hygiene” and didn’t bath more than once every couple weeks or ever use deodorant, soap or shampoo.

Nope….my d**k was screaming yes, but my nose vetoed it, I was out….

Simply picking up after yourself is deferred repeatedly when it can be done and over in ten seconds.

Inflexible mind, or unwilling to learn new things or see other perspectives.

Seeing the fault in others, but inability to perceive such in themselves.

Need someone who is calm in stressful situations, life is full of huge problems that will need two to deal with properly.

22. Inability to deal with silence

I dated this chick, we’ll say “the one that got away”.

Everything clicked on every level, but during quiet moments, like bed or driving, she HATED silent moments and would screech like a dinosaur incredibly loud.

It always caught me off guard and drove me absolutely nuts.

23. A total lack of awareness

If she starts trying to test my cool or how much she can manipulate me that’s a dealbreaker.

It means she’s willing to be with someone if she can exploit them regardless if she can’t exploit me.

I was interested in a girl recently, I liked her a lot and she was really hot and great in bed as well, but something about the stories she told me about herself seemed off and honestly that was a red flag I was ignoring.

Well, turns out most of what she told me about her life was a lie, even the small stuff, that wouldn’t make any sense to lie about. I think she may be a compulsive liar.

We weren’t exclusive or anything, we were just going out so far, so there was nothing to really break up, so I just stopped contacting her.

I want to date positive and supportive people, not a**eholes masquerading s**t behaviour as flirting.

Or wanting emotional support, reassurance and compliments, then acting like you’re not a man for wanting or needing the same.

Or acting like there are “man jobs”, while thinking there are no “woman jobs”.

Or judging you for being vulnerable or having weaknesses.

Sorry, not gonna live in a prison to fit in to your rigid view of what a man is. No matter how “hot” you are.

The I must have you attention 24/7 attitude no matter what.

Your friends and family no longer matter and you must ask for permission to be away from me for any period of time and that time must have a strict end point.

29. Being super into astrology

Any person who blames their s**tty behavior on random star alignments is not an adult.

This goes for any relationship: friendly, familiar, and romantic.

Yeah. I can’t say as I’d argue with any of those.