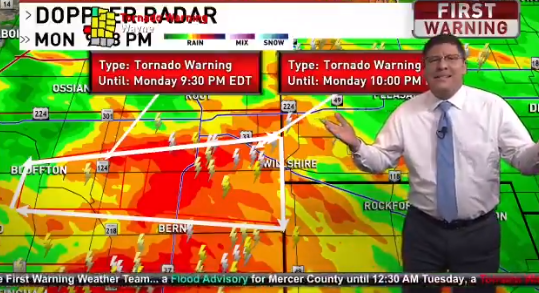 On May 28, 2019, devastating tornadoes hit Dayton, Ohio. A total of 13 tornadoes hit the region, injuring more than 200 people and causing millions of dollars in damages to homes and businesses.

During the tornado warning, Fox 45 meteorologist Jamie Simpson was just trying to do his job. He was informing the public of the very real danger, where tornadoes were likely to strike, and what to do.

WATCH: Weatherman @JamieFOX45Now in Dayton, Ohio snapped at viewers complaining on social media about the network's decision to cut into The Bachelorette Monday evening with emergency tornado warning coverage

"I'm done with you people, I really am. This is pathetic" pic.twitter.com/m4nxmoUUkY

His warnings interrupted The Bachelorette, and some viewers were annoyed, and said so on social media.

“We have viewers complaining already,” he said. “Just go back to the show.”

“This is a dangerous situation here,” Simpson added. “I’m sick and tired of people complaining about this. Our job is to keep people safe and that is what we’re going to do.

“I’m done with you people, I really am. This is pathetic,” he added. He then apologized for his frustration.

“I’m sorry I did that. It just really bothers me there are people who don’t care about other people’s safety around here,” he finished, before turning back to the weather.

Even The Bachelorette herself thought the complaining viewers were misguided:

Lolz too funny, thanks Dayton, Ohio for the love, but be safe. naders are no joke. https://t.co/RdxYOUpx4w

I mean, the damage speaks for itself:

Some of the worst damage I’ve seen this AM is along N. Dixie Dr. #DaytonTornado pic.twitter.com/6wQygEJ8o8

Tornadoes are terrifying and unpredictable. Thank goodness for meteorologists like Simpson who can warn us in time to take the appropriate actions to secure our families and loved ones.

Seriously, just stream The Bachelorette later. It will be fine.