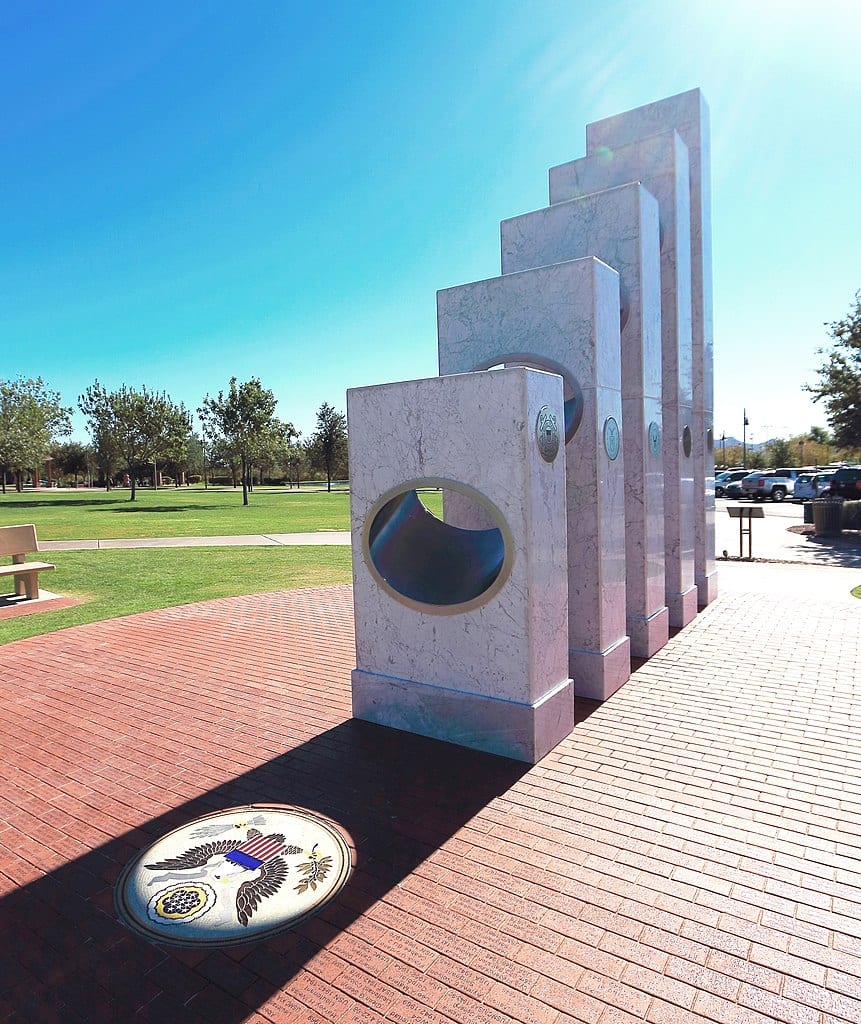 Once a Year at 11:11 AM the Sun Shines Perfectly at This Veterans Memorial

Every November 11–Veterans Day—at 11 minutes after 11, the sun shines perfectly through the ellipses of the five Armed Forces pillars that make up the Anthem Veterans Memorial. The effect is a beautiful spotlight shining on a mosaic of The Great Seal of the United States.

Located in Anthem, Arizona, the monument honors the service of the armed forces, and serves as a place of reflection for veterans, their family and friends, and others who want to pay their respects to the brave men and women who defend the freedoms of the United States.

The Anthem Veterans Memorial is a monument located in Anthem, Arizona which was dedicated in 2011 to honor the sacrifice and service made by members of the United States Armed Forces. The memorial's five white pillars represent the nation's military branches and are arranged in Department of Defense order of precedence: Army, Marine Corps, Navy, Air Force, and Coast Guard. Each pillar has an elliptical opening that slants downward toward The Great Seal of the United States. On Veterans Day – November 11 – the design allows the sun's rays to spotlight the Great Seal at 11:11 AM Mountain Standard Time. The award-winning monument is surrounded by 1750 red paving stones engraved with the names of veterans. The red stones, the white pillars and the blue Arizona sky represent the colors in the flag of the United States. . . . #AnthemVeteransMemorial #veteransday #thankyou #veteranspastandpresent #honor #courage #usa #november11

Renee Palmer-Jones, a resident of Anthem, designed the memorial. She used 5 marble pillars to represent each of the 5 branches of the armed forces.

The brick pavers inside the Circle of Honor are inscribed with the names of more than 750 servicemen and women representing Anthem’s support. The red of the pavers, the white of the marble pillars and the blue of the sky symbolize the United States flag. The circle of pavers shows the country’s unbreakable border.

Engineer Jim Martin, another resident of Anthem, aligned the pillars with the sun to create the awesome solar element.

I just learned about this Veteran's Memorial yesterday and felt I needed to see it in person. Pictures don't doit justice, it is a really nice piece. I'll have to come back next year to see the sunlight line up! #veteransday #anthemveteransmemorial #army #navy #marines #airforce #coastguard #usa #country #pride #nov11 #anthem #arizona

It is truly a breathtaking tribute to the service and the sacrifices of the armed forces of the USA.

Have you ever been here? Have you seen this amazing tribute?